By Pivní Filosof January 24, 2008
It has already become a habit for the third Tuesday of every month, attending a beer tasting in the cellar of Pivovarský Klub. This time, the beers that were presented were those from Náchod.

I arrived a bit early to be able to secure my favorite place at the bar, and reserve one for Evan, who was on his way.

I said hello to the people from the klub, took a seat and was offered the welcome drink. This time, instead of the usual bottled lager, it was a brand new beer that had arrived in Prague for the first time, Pikard tmavý, from the new brewpub Zamecký Minipivovar Ostrava. This microbrewery is located at the Zábřeh chateau and was opened in september last year. This dark, unfiltered beer was brewed with three kinds of malt and some of the hops were replaced by calamus. The result is a pretty interesting beer, with a sweet coffee and tropical fruit nose. We still feel the coffee when drinking it, now joined by mild caramel and herbal notes, the finish is short, but leaves nicely acid aftertaste.

The two glasses I drank helped me to warm up and be well ready when Primátor team came out to the pitch.

Goalkeeper: Nealko, good at his job, but don't hask him to do anything else.
The defense: Diamant, the weakest player in the team. Dia beers are brewed by several pivovary, they have low carbohydrate levels and aim at those who, due to health reasons, can't drink normal beer. Quite bad in most cases, Diamant is not the exception. The rest of the defense are Světlý (10°balling), a typical player that will shine but knows his job; Premium (12°balling), a full back that can surprise the opposite team when crossing the midfield and closer to the midfield, Premium Dark (12°), the captain of the team.
In the midfield: Rytířský 21% and Double 24%, with respectively 9 and 10%ABV, this two strong defensive midfielders demand respect and they also know how to work the ball. In front of them is the most skilled player of the team, Polotmavé 13%, one of Primátor's young rising starts and an amazingly interesting and talented player. He is supported by the more experienced Exclusiv 16%, very smooth with the ball, but with a strong 7%ABV. He is in charge of shooting penalties and set pieces near the penalty box.
The strikers are the other two rising stars of the team. Weizen and English Pale Ale. Both young, skilled, smooth and fast, they are slowly getting more experienced and their style is receiving more attention from both specialist and fans. 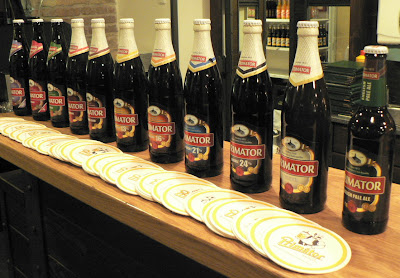 It might not be a team full of stars as others are, but Primátor, if given the opportunity, can play as equal against the big ones, while offering fans a good looking and creative game for all tastes.

During the evening, between beer and beer, Aleš Dočkal talked about his seminars with chefs and managers of luxury hotels, which aim to finally introduce beer to upmarket gastronomy, both as an ingredient and as a drink to pair with food.

The first beer auction also took place. The auctioned items were the last two bottles of the marvelous Florenc 14:14 that were sold at 210 and 250Kc. Aleš Dočkal promised there will be more auctions of this kind.

The excuse of the event, as if it needed one, was not to present a new product, but to introduce the new labels of Primátor. With them, the brewery wants to make their beers more visible on the supermarket shelves, and I must say, they aren't bad looking a tall.

In a way it was good that more people than was expected showed up for the event. The samples had to be rationed among more, otherwise it would have been more difficult than it was to follow all the interesting information that Mr. Kořínek gave about the beers.

I want to recommend you to read Evan Rail's excellent report on the tasting. There he mentions that Primátor is planning to announce a new product some time this year. He hopes it will be a lehké pivo (beer fermented at a maximum 7°balling, and in the past, quite popular as "table beer"). When I read that I associated it with two words that by chance I heard Mr. Kořínek say to someone, pseničné tmavé (dark wheat beer).

If I had to bet, I would put my money on pseničné tmavé. It is true that some breweries have recently come out, or are planning to come out, with some lehká piva. However, Primátor's slogan is "specialist in specials", and I can't think of anything more special than a dark wheat beer, it is something that simply does not exist in the Czech market. Whichever the case, the new product will sure be welcome by all beer lovers. Personally, though, I would like to see pseničné tmavé rahter than lehké.

I have mentioned it before, but I'll never get tired of saying it, Primátor is the most innovative and interesting brewery in the Czech market. It is also a model to be followed, not only for breweries, but for state companies the world over, since the sole owner of the brewery is the City of Náchod.