Pivo and Hospoda, what a combination. I like Czech food a lot, specially for lunch. At the right place, it is usually good value for money, and you can be sure that you will be served a good pint as well. And since I will be writing a lot about good beer spots, I thought I would start with my favorite, Pivovarský Klub.

It is one of the many hospody that I found by chance. One day after a successful meeting with a client, being in a good mood, I started walking looking for a nice place to celebrate with a beer, and I found the Klub. Of course I already knew its sister brewpub, Pivarský Dům, so without second thoughts, I went in. 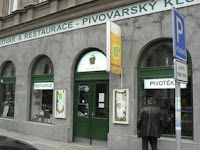 It immediately fascinated me . Two of its walls had shelves full of bottles of beers, not only Czech, but from other countries as well. When I was handed the menu I noticed that it listed more scores beers, including 6 on tap. I had found paradise. 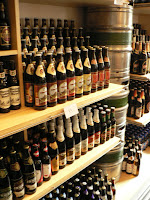 Pivovarský Klub calls itself a Restaurace and Pivoteka. It has two rooms, one at street level, non smoking, decorated, apart from the already mentioned shelves, with hundreds of beer bottles from the last 50 years. At the windows there are some beer paraphernalia and two small copper kettles where sometimes beer is brewed. The furnishings are tall tables with empty beer barrels as legs. The cellar room is darker, with vaulted ceilings and exposed bricks, nice to have some beers with a group of friends.

The Service is usually very good, and sometimes truly friendly (something rather rare in Prague). Some of the waiters know a lot about beer, and are able to recommend which beer will go better with the taste of the client.

The Food, nothing fancy here, actually is more something to go with the beer. However, some things can be very good, for example Pečené Koleno (sold by weight) or Jelení guláš podle pana nadlesního (Venison goulash a la game warden). Also the beer snacks are wonderful if you want something smaller to help you drink more.

There are six beers on tap, the house Pivo, Štěpán Klasický Světlý Ležák (brewed by Pivovarský Dům), and the rest rotating and coming mostly from small independent breweries and brewpubs from all over the Czech Republic, which makes every visit a sort of beer adventure, since likely is that you will find something you have never drunk before (which makes me go there almost religiously at least once a week) . You can also drink any of the 200+ bottled beers not only local, but also imported. If this was not enough, sometimes the also brew their own beers, all of them in very limited batches and all of them excellent. 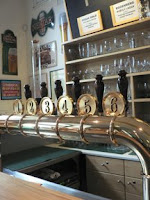 They also organise tastings. Usually they are presentations of regional breweries who come to show their products and talk to the attendants, but also some foreign beers are presented. And not only that, patrons can also make their own beer with the assistance of a brew master; something that seems quite popular for corporate events, though not very convenient for tourists since at least a month is needed for the beer to lager.

In a nutshell, it is the perfect place for those who want to discover and learn more about Czech beers, at a place with a very special atmosphere, good food and very good service all at very reasonable prices.