After a long three month wait the day of our visit to Chodová Plána finally arrived. The reason for going to such a boring corner of the Czech Republic was the beer spa run by Chodovar, the local brewery.

After two hours by car, we made it to the hotel U Sladka. A nice building that looks recently renovated. Wanting to make the weekend a bit more special, my love and I had booked the romantic package called Pivní lázně z lásky (beer spa with love) that included accommodation for two nights with breakfast, beer spa, massage, brewery tour and a bottle of sekt with chocolates waiting for us in the room. 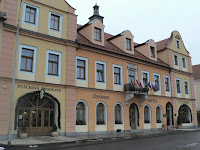 We liked what we saw when we got to the room. It was spacious with big windows to the courtyard and clean and modern looking furniture, which fortunately was not in the "Breznev Chic" style so common in many Czech hotels. On the double bed there were rose petals (artificial, but still a nice touch) and on a little table, chocolates and candles. The bathroom had a bath big enough to accomodate both of us and it was nicely decorated. There was also a minibar, there, instead of miniature bottles at giant prices, were four 0.5l bottles of Chodovar, four 0.5l bottles of soft drinks (all at a regular price) and the promised bottle of bubbly. The only thing missing was a radio to play music.

We had got there quite early, so we went to have a bite at Ve Skále, the brewery's restaurant. This massive hospoda is located deep into what used to be a granite mine that also holds the lagering cellars of the brewery. To get to the restaurant you have to walk a 30m long corridor that ends at a reception - gift shop, and then another 10m to the restaurant proper. We liked the atmosphere of the place from the very beginning, it is really special. After having a quick lunch we went to the neighbouring Mariánské Lázně. 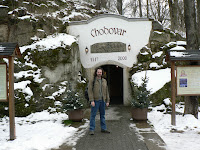 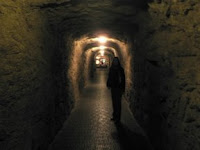 Mariánské Lázně is a famous spa town that is somewhat eclipsed by Karlovy Vary. It was founded in 1808 and looks as if made of marzipan. It is very pretty. We were lucky, it had been snowing recently and its main park, Skalínovy Sady, was covered in white. We went at the beginning of December '07 and the Christmas decoration could already be seen, which gave the town an even nicer atmosphere.

For dinner we went again to Ve Skále, which was almost full. The closeness to Mariánské Lázně makes this a very popular spot for tour groups staying in the Spa town. Fortunately, they have their own, almost separate room, so the atmosphere remains pretty much intact. We were lucky to find a table to share. 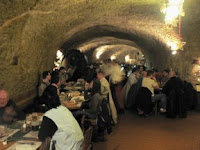 To open the evening, I opted for a Černá desítka. Not so good. Too much caramel and almost no roasted coffee or similar notes, a bit weak actually. But my wife liked it, she said it is her style of beer. 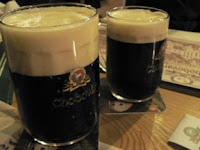 nice looking but didn't make it for me
The food arrived, pečené vepřové koleno (roasted pork's knee) for me, and Svíčková na smetaně, for my dear, both really good and very well made. The meat on the knee simply fell off the bone and the skin, which many times has the consistence of rubber, almost melted in the mouth. The sauce of the Svíčková was darker than what we are used to, but it was very rich and had the right thickness, and the knedlíky were not too shabby either. 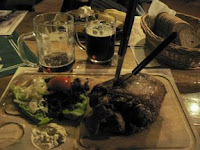 For my second beer I chose Zámecký ležák Speciál, a 13° balling golden lager that I had already drunk bottled. I had liked it then, but I wasn't mad about it. My opinion didn't change here, so for my third (and fourth) pul litr I went for the Kvasnicový Skalní ležák, an unfiltered lager tapped straight from the lagering cellars. Very tasty and fresh, fruity, it had really impressed me when I had it with lunch. For dessert we had each a panák of Pivovice, a beer destilate that was not half bad, but I like good slivovice better. We went straight to bed from there, we had a day of hedonism ahead of us the following day. 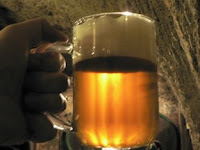 Now, this one did
But before telling you about such sublime experience I have to give my compliments to Chodovar. Their beers are of good quality, the water comes from its own undergroud sources (and it is also sold as mineral water), they keep their own maltings and they still use open fermenters. However, they are no big deal, in fact, they are a bit boring. Their marketing on the other hand, is brilliant, despite not spending astronomical amounts on advertising. They have two gift shops, the one at the restaurant, and another one right next to the hotel. There you can buy all the beers and soft drinks produced by the brewery, as well as clothing, their original koupelové pivo (bathing beer), beer shampoo and bath lather (which became very appreciated Christmas presents) and many more things. The hotel is also very nice and clean, and full of lovely details such as the custom made paintings that hang in the dining room and rooms. But what tops all of that is, of course, the spa.

I'm sure that to set up something like the investment was massive. But they are really successful. We had originally planned in August last year to go in September, but we were told that they were fully booked at weekends until the end of November.

Back to our story....
We got up rather early because we wanted to have time for lunch. We had a feast, there were scrambled eggs, different kinds of ham, salami and cheese, pastries, different kinds of bread, honey, juice, coffee and home made blueberry and beer jam (delicious!). With a jolly belly, we went to what we had come and waited so long for, the Beer Spa.

I want to make something clear before continuing. This pivní lázně is not a marketing gimmick to attract drunkards. The people of Chodover have put together something serious and very professional. They consulted with balneologists from Karlovy Vary and Marianské Lázně. They wanted to bring together two of the most well regarded Czech traditions, beer and therapeutic baths.

The spa is located in the vaulted cellars of the hotel. Exposed bricks and the lovely smell of fresh beer already tune you up with what is waiting for you. One of the nurses told us to remove our clothes at the dressing room and gave us a crisp white sheet to cover ourselves. Once dressed as Roman senators, we were shown to our bathtub, which was being prepared. The bath consists of half specially brewed dark beer, half mineral water and herbs.

Just when going into it you are invaded by a delicious feeling that not only comes from the 34°C of the bath, but of the vapours emanating from it, lovely scents of malts and hops. The complimentary glass of lager you are given must have been one of the best I drank in my life, not so much for the beer itself, but for the effect of drinking it in that lovely and special warm bath. A couple of minutes, it is all it takes for your extremities to fully relax and start floating, while you feel that all your system has slowed down a couple of gears. It is an experience hard to describe, but just recalling it makes me feel better.

Oh! But that's not it. Just when we are beginning to slide into sleep, we are announced that the bath is over and that the next phase of the treatment is awaiting us.

Wrapped in our sheets we are shown to a very dimly lit room. We are told to lie on beds and we are promptly wrapped in a big towel, just like babies. All the lovely scents that we felt in the bath start to come back out from our skin. The feeling is like being in a sauna, but without the heat and humidity. The only thing that kept us awake during those 20 minutes was the second glass of beer that we slowly drank as we felt we were almost levitating.

After all that, we felt like new. We gladly followed the instruction of not showering for at least 4 hours (in fact, we didn't shower until the evening). And it was lovely to still feel the aroma of beer on our skins for the rest of the day.

Still ahead of us were a nice massage, lunch and the brewery tour, which with the exception of one really cool touch, doesn't give any surprise to those who have already visited a brewery.

Some pics of the brewery tour 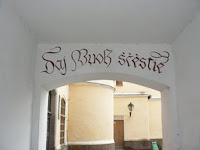 Every Czech brewer's motto.
May God give us luck (or happiness) 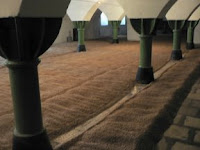 The first step of the malting 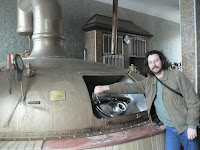 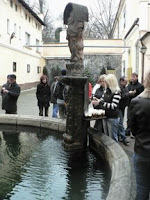 The coolest tap in the world
My friends, start saving, pawn your dog, and with enough time ahead, book a weekend at Chodovar. After a pivní lázně treatment, your life will never be the same.

Meanwhile, I leave you with pics to increase your envy.... 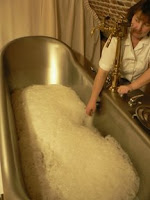 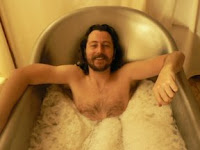 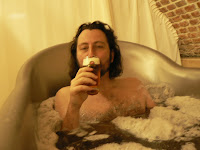 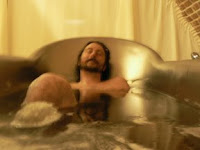 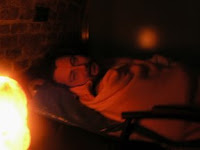