By Pivní Filosof January 28, 2008
U Medvídku is a historic hospoda in the centre of Prague. It is one of those places very popular among Czechs as much as tourists. It has good prices for OK food and good service and very good Budvar on tap. It is a nice spot for session drinking. But that is not actually the best of the it. That is on the first floor. 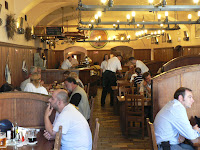 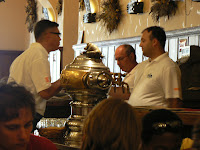 After walking through the massive rooms of the beer hall you come to a stairway that will lead you to a microbrewery, an a very special one at that. I like going there in the afternoons. Usually then there aren't too many people, and sometimes I am all alone. Something I like a lot, specially when Laďa, one of the waiters is there, he plays very good music instead of the usual Eurotrash radio that you can hear pretty much everywhere else, and we always have a good chat. 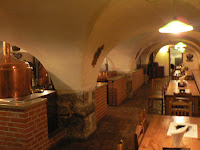 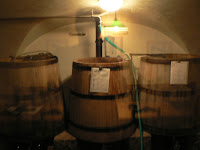 They brew two beers regularly (maybe they will be three, more on that later), OldGott Barique and X33. And you can see while they are making them because the tables are right at the brewery proper. 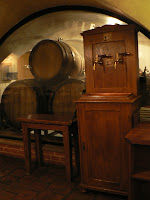 OldGott is an extraordinary beer. It is fermented and lagered in oak barrels, which you can actually see while you are sipping it. Amber in color with a light tanned very compact head. The nose is full of fruit and very interesting citrus notes. I remember when I took the first sip of it, I had to close my eyes and let myself be delighted by that wonder and its flavours, sweet and bitter at the same time, neither stepping over the other, instead the complement each other perfectly like a couple that has been dancing together for a long time. Together with that is the wood, that can barely be felt, but that it is there and gives this beer a very special character. It is brewed at 13°balling (5.5%ABV), and it's very difficult not to have another glass, despite its rather steep price (48CZK/0.5l). But believe me, this beer is worth them. You won't find anything like it in Prague. 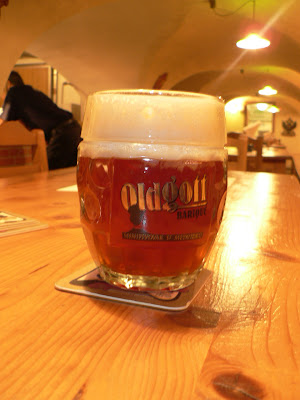 The other one, the X33 is something even more special. It's name is not some fanciful marketing gimmick, but the balling graduation at which it is brewed. And it is simply wonderful, mind-blowing. 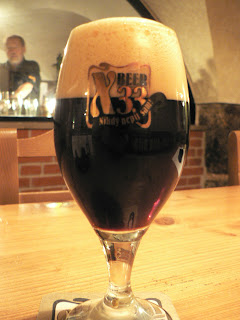 X33 is dark amber in colour and crowned with a compact tanned head. Whenever I drink it I take my time to feel its perfume, full of syrup, citrus, herbs and wood. It makes my mouth water. The first time I drank it I thought I was touching the skies with my palate. The flavours always remind me of home-made marmalade made with sweet oranges, together with leather and wood, it has a long yet mild syrupy finish followed by a lovely bitter aftertaste. It is a beer that begs us, actually commands us to drink it slowly, enjoying every drop of it. It is just heavenly. When finishing the glass, this beer will tempt us to order another one, which should be carefully considered, since its 12,6%ABV are something to take with respect. 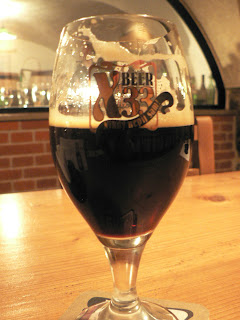 But it isn't cheap. A glass of 0,3l will go for 111CZK, but I think they are worth it, this is a very special drink. At times it feels like drinking some good Port or sweet Sherry.

Like its little sister, Oldgott, it is also fermented and lagered in oak barrels, but it takes a bit longer. X33 is made with caramel and Munich malts with as much density as possible. It ferments for two weeks and then lagered for 14 weeks. After this 14 weeks a new strain of yeasts is added to reactivate fermentation and the beer is then let to lager for further 14 weeks. And with each batch this beer improves, thanks to the barrels getting older and giving the beer more flavours and character.

These two wonders are the children of the brew master Ladislav Veselý, who is a very nice person. Whenever I go he is happy to answer my questions about the beers he makes and sometimes, when he is not too busy, he sits down with me to chat about beers or even gives me to try new batches, and lately some of the experiments they've been doing lately at the brewery. 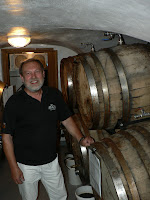 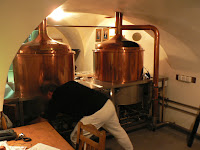 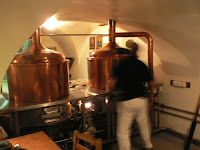 If you are in the centre with not much to do in the afternoon, stop there for a beer and let yourself be delighted. 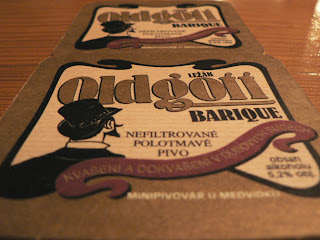