Not wanting to be less than my beer blogger friends, I am forced to tell you which was the first beer of this still fresh 2008.

Unlike other years that we spent with groups of friends, this time my wife and I decided to receive the new year together at home. To be honest, it wasn't something we had planned, it turned out that way and we gladly surrendered to the circumstances.

We had a quiet day, we went for a walk and had bits to eat and drink during afternoon. All while the boar guláš that would be our dinner was cooking. There were Svijany, Bernard Tmavé Kvasnicové during the day and evening and Vyškov Jubiler to toast at midnight.

After a virtual toast with my parents in Argentina and getting over the strange sensation of receiving the year completely sober, I went to open my bottle of Florenc 14:14. 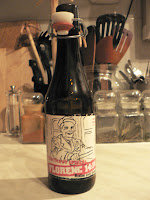 This polotmavé with 5.5%ABV came from a more than limited batch. Designed and brewed with three kinds of malt by Pivovarský Dům, and only for friends, it was a bit of an honor for me to get bottle number 59 as gift from the people of the Klub.

I had to resolve a serious inner conflict during the couple of days that passed between having received it and the new year. It was something too precious to be opened and drunk just like that, yet I could not wait to taste it. Becoming the first beer of 2008 became a great excuse.
Florenc 14:14 (the name corresponding to the location of Pivovarský Klub and the beer's balling graduation) is an unfiltered semi-dark beer with dark amber colour and no fizziness. Its aromas invite us to take some time to enjoy them, not very intense but still complex, with notes of caramel and fruit, together with herbs. I found its taste equally complex, tropical fruit and some citrus in the back with the hops that grow in intensity as if wanting to dominate, but not allowed until the finish, that is long, very long and very pleasant. 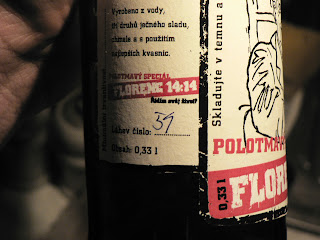 After finishing this exceptional beer I felt a bit sad, I was afraid that it would become just a delicious memory and that I would never be able to enjoy it again. My fears were dispersed when I was told yesterday at Pivovarský Klub that they have decided to brew it again. That will be done four times a year in 5hl batches, that I'm sure will dissapear very quickly, so it is better to keep eyes open.