462 words say more than one image

By Pivní Filosof July 15, 2011
The news that Pivovary Staropramen had yet another year with a drop in production (by 7%, if I remember well), together with the news that Pivovar Svijany has finished with the construction works to expand their capacity in order to meet the increasing demand for their beers, made me remember about this photo: 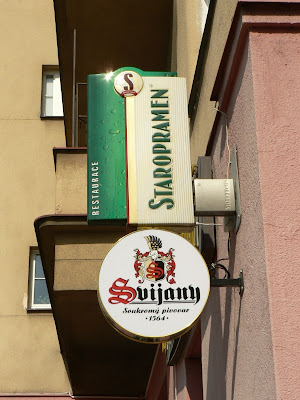 It is said that an image can say more than a thousand words. That's not always true, and less so if you don't happen to have enough background information, as it is the case with the picture above. At first sight, we have signs that announce the two brands I spoke about before, which many will rightly assume that also show the way to a pub, bar, restaurant, etc.

After having read the paragraph that precedes the picture, some of you might take it as a symbol of what's happening, a regional brewer that is growing partly thanks to taking sales away from a multinationally owned macro brewer. But that's not were the story ends, to me the photo says a lot more.

In 1998 Svijany brewed less than 30,000hl. The facilities were in urgent need of investments to keep on working, but the owners at the time, Pivovary Praha (later Staropramen), had decided that such investments were not worth it for such a small brand and therefore, it would be better to shut the factory down, which from their point of view, was kind of sensible.

When learning this, the Head Brewer (whose name I can't remember and can't be arsed with googling) decided he would save the company were he had worked for so long and, together with some associates, made an offer to Staropramen. At first, the people in Smíchov refused to sell and this good man was left with no other choice than to appeal directly to Bass&Co., then owners of Pivovary Praha, who did accept the offer. Or at least that's how the story goes.

Whether that is the way things happened or not, today the production of Staropramen keeps on falling, while Svijany last year brewed more than 400.000hl, a figure that is set to increase this year, again.

As I was wandering around the city researching for my book I saw at least half a dozen places that today sell both brands. I don't know how well each of them is doing at each of the places, but it is clear that each pint of Svijany someone buys there is a pint that Staropramen won't be selling.

I don't believe that anyone working for Svijany today has any sort of animosity towards Staropramen, but I wouldn't be surprised if each keg they sell at those places that sell both brands has for them a value that goes beyond the monetary.