By Pivní Filosof July 26, 2011
As soon as I knew I would have most of last Thursday free I decided to make a trip I'd been owing myself for some time. The weather that day turned out to be on the wrong side of crap, but it didn't matter, I was planning to do something like I had done in Únětice. My goal this time was Pivovar Antoš, in Slaný.

Since this brewpub had opened in February, I had heard nothing but good comments, about the place, its food and, above all, its beers. I was very glad that I was finally going to be able to make the pilgrimage there.

It's very easy to get to Slaný. There are regular buses that leave from Dejvická (the stop is in front of Hotel Diplomat) and the trip takes a bit more than half an hour. I took the bus leaving at 10, which left me at the town's bus station. According to the map I had consulted, I had to go around the church I was able to see from were I was standing and then walk about 200m to the brewery. Since the place didn't open until 11 I went for a short walk around Slaný's centre. It turned out to be prettier than I had expected. It's true that some of the buildings look a bit run down, but in that day's weather, that added a bit of charm.

I got to the restaurant right when it was opening its doors. It is very nice inside. It's located on a corner, in a building that was originally built in the 13th century, but its current looks date from the 18th, if I remember well. It's divided into several rooms on three levels. What used to be the courtyard now has a glass ceiling below which are the mash tun and kettle. The effect is quite impressive, with the natural light shining on the copper plating of the kit. 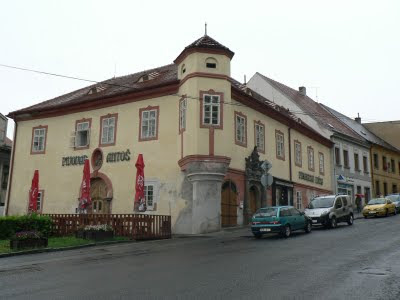 I found a table by a window in the taproom. They were brewing that day and the air was full of that lovely mashing smell. A waitress with a pleasantly genuine smile asked me what I wanted to drink and gave me the menu. I picked a desítka to quench my thirst and the day's special to take care of the hunger. The drštková wasn't too shabby and it felt great given the weather, the pork řízek with creamed potatoes (real ones, not the instant crap) were really good.

But it wasn't the food what had brought me there, it was the house's beers and they didn't disappoint. The desítka was fantastic. It's incredible what a skilled Brewmaster is able to do with something as simple was a 10º Balling pale lager. It smelled like walking in a field of ripe wheat while holding a bunch of wild flowers and it tasted like perfection that has been cold fermented and sufficiently lagered. To me, one of the best in its category, no doubt, up there with Kout's or Chýně's. 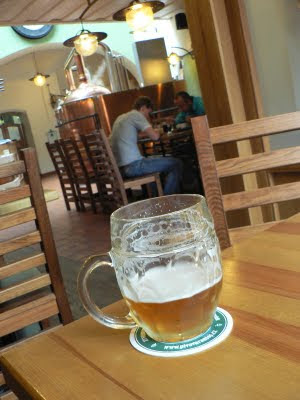 I could have stayed there the rest of the day drinking půl litr after půl litr of that beauty and the trip would have been more than worth it, but I fancied tasting the rest. The světlý ležák (11.8º, so not a proper dvanáctká) was like desítka's big sister. Very nice it was, too, but I didn't like it as much as the previous one, perhaps it just tasted a bit too similar. 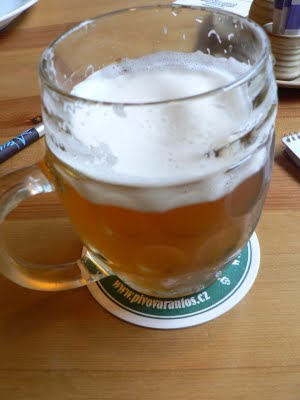 Now, if the desítka was perfection in a half litre glass, the polotmavá 13º belongs to an alternative reality, to a parallel universe. Each one of its molecules seem to have been designed to cause the most exquisite beer pleasure. It reminded me a lot to a Dunkles from Bamberg I had to review recently, but better. Nothing bombastic, nothing “-er” or “-est”, it doesn't need any of that, after all, it's my favourite beer. 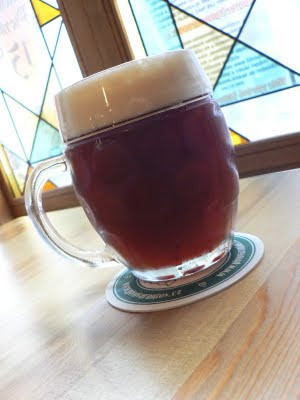 I also drank Černé Poupě a really black 12º lager. Very nice, coffee with some milk chocolate and a mild touch of licorice and flowers. I prefer my black beers to be more “roasty”, but I still enjoyed this one. 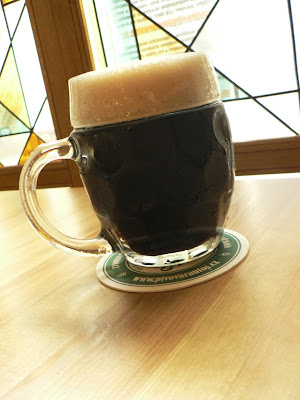 Drinking and eating weren't the only things I did at Pivovar Antoš. I also had a chat with Mr. Pavlík, one of the owners. A pretty nice bloke and one of those people who is convinced that in order to prosper you must, first and foremost, want to do things well. He told me he doesn't have any brewing background, but, like many of us, he had always dreamt about having his own brewery. However, that wasn't the original plan when he and his partner bought the building. It was only after they learnt that the family that once owned the place were also owners of brewing rights, something that wasn't very easy to get back then. 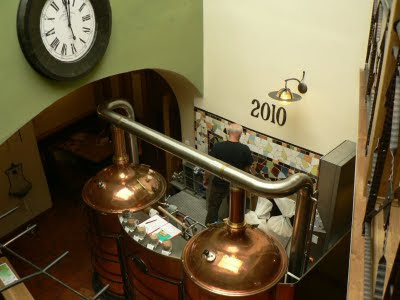 The man in charge of brewing the delights I enjoyed while talking to Mr. Pavlík is David Máša, someone with a lot of experience, who used to be a brewer at Krušovice, and the assistant brewer happens to be his son. 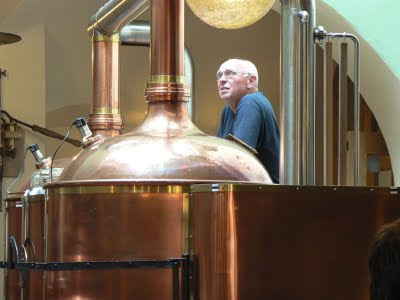 Mr. Pavlík showed me the rest of the brewery, part of which is located in the building's original cellars and gave me a couple of samples of that polotmavé straight from one of the lagering tanks. There wasn't that much difference really, all the beers are tapped straight from the tanks, Kellerbier-like. 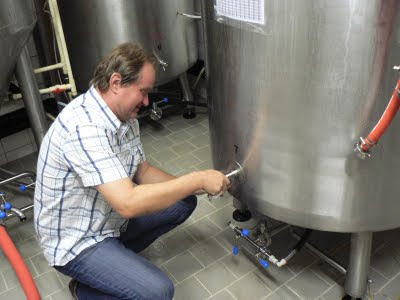 I would have loved to stay there for the rest of the day, but my bus back to Prague was leaving at 1PM. Before leaving I was asked which beer I had liked best. I arrived home with two 1,5l bottles of that gorgeous polotmavé.

Really, if you are in Prague get the bus to Slaný. A visit to Pivovar Antoš is well worth the trip, you won't regret it and you'll sure thank me for the tip later.