By Pivní Filosof July 08, 2011
For a change, it seemed that the weather forecast was going to get it right, Wednesday (a national holiday here) promised to be too nice a day to stay home. My wife proposed going for a day trip. The idea was to find a place that wasn't more than an hour away by car, where we could go with our daughter and where we hadn't been yet. El casitllo Kokořín was the place that checked all the boxes.

Once you leave Mělnik and start following the brown signs that show the way to the caslte, the road becomes really beautiful. It gets into forests that are almost jungles, which try to hide rock formations that seem to have come out of a Slavonic legend, all dotted with a couple of villages with pretty houses.

As expected for a day like this, the castle's car park was almost full when we arrived. After leaving the car, we still had an uphill walk a couple of km long to get to the castle, good exercise. 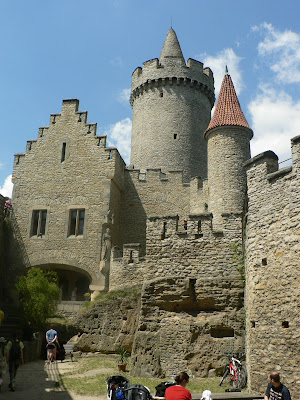 The castle itself is in the middle of the woods, on top of the hill we were climbing and its tower appears almost by the time you had lost any hope of finding it. It's not too big, but very nice. We walked around a bit, enjoyed the impressive view from one of the towers and got on the way back downhill. My daughter had done all the way up walking, so I had to carry her when we went down. That, together with the heat and the hour made me a bit hungry and very, very thirsty. I swear to you, I would have gladly knocked down a pint of Staropramen.

Right behind the car park there was patio restaurant that looked pretty nice. We went straight there and found a seat inside, it was too warm to be in the sun. 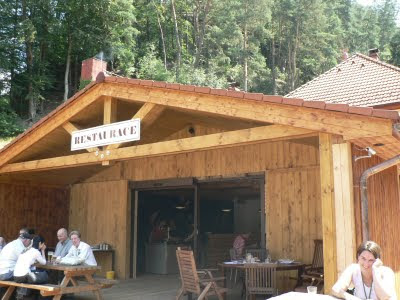 I don't know the name of the place, I've forgotten it. I thought I could find it on the Internet, but I wasn't able (not that I searched very hard). Whatever its name is, it surprised me with the beer offer. Besides the Urquell that promised the umbrellas they had Podkováň, a brewery that only a month ago, reopened after three years, and at 21CZK a half litre of 11º! And it was soooo lovely (and not only the first one). 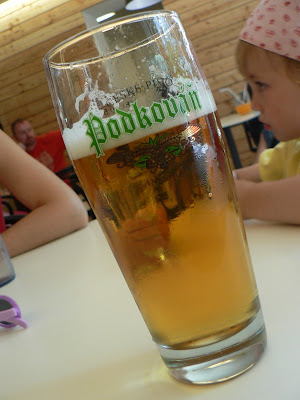 The day's menu only listed food that was a tad too heavy for the weather, so we ordered only soups. Wise choice. The soups were great, but the service was awful. It wasn't the fault of any of the four servers, mind you. They were friendly and trying to do their best. I'm no restaurant wizard, but you don't need to have much experience in the field to know that whoever is in charge of that place has no clue about managing staff. All of the four servers were taking care of all the tables at once. The result was confusion. Three times we were asked if we had ordered, once one of them wanted to give us something we hadn't ordered, we had to wait more than 15 minutes for our soups (which were ready and only had to be put in a bowl), when I ordered my second beer I was brought Pilsner Urquell, after almost 10 minutes, instead of Podkováň (fortunately, they didn't charge me the Urquell's 33CZK ). If we had ordered any of the main courses, we would probably still be waiting there. It's a real shame because the place, the food and the beers were nice.

Done with the soups, we decided to go to the neighbouring Kokořínský Důl. We had passed it with the car before and there were a couple of pubs that looked really fine. 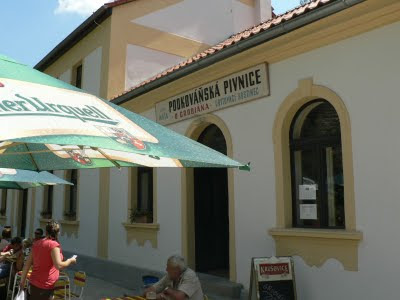 We parked in front of the oldest looking one. Just like at the pub before, there were Pilsner Urquell umbrellas on the terrace, plus a Krušovice sign. What we found, instead, was another beer surprise, again Podkováň! And at the same price. In fact, the name of the pub was Podkováňská Pivnice U Grobiána. And the inside was just as old-fashionedly good looking as the outside.

Service here was a bit better and with the missus we ordered smažák (fried cheese, hermelín this time). They were great! Zdeňek Pohlreich can bitch all he wants about smažák, to me, it's simple, day-trip, beer food at its best. 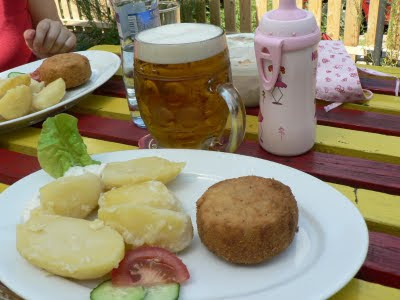 While my wife was ordering, my daughter very cunningly led me by the hand to the inside of the pub and, almost as if she didn't want it, walked slowly to the fridge with the ice-cream. You tell me, what other alternative I had but to come back out holding a chocolate ice-cream. 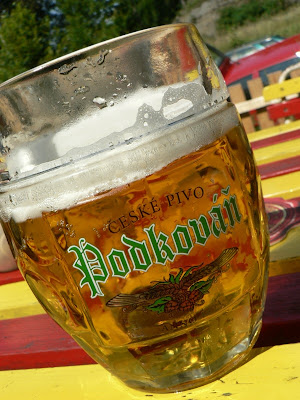 After the second pint I realised how nice it could be to live, or at least have a weekend house, in Kokořínský Důl. It's a little bit of pisshead's heaven. Of the three pubs, not one sold any of the big brands, one sold Podkováň, another Bernard and the third, Svijany. If that wasn't enough, U Grobiána at weekends opens at 9! I could almost imagine myself on a Saturday or Sunday morning going there with my džbán while breakfast cooks slowly. 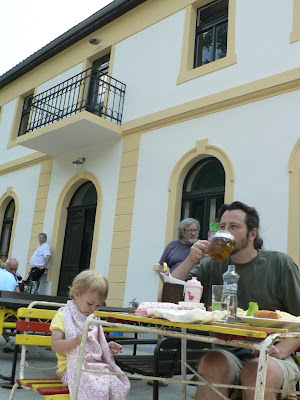 After having eaten and drunk very well, we went for a short walk around. We left a lot unseen in this area, so we have a great excuse to come back. I'm sure it will be worth it.