And we could all win

By Pivní Filosof June 17, 2009
A couple of months ago I wrote Evan Rail to see if he was free to have a bite. His answer was something like: "What if I buy you lunch at a nice place where you can have an unusual beer?". Since turning down such offer would have been impolite, I just asked him when and where we should meet.

The moment he told me to meet him by Tančicí Dům (The Dancing House), one of my favourite buildings in Prague, I knew we would be going to Céleste, the restaurant that had just opened on the building's top floor. 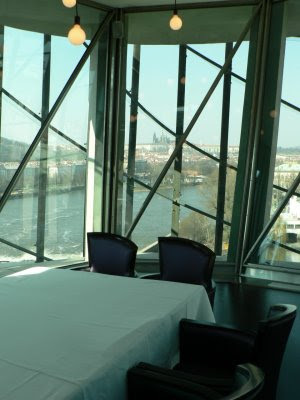 Evan was researching for an article he would write for the New York Times and a visit to this upscale restaurant was part of the assignment. After having a couple of beers at the bar that Céleste runs on the ground floor, we were told that we could go upstairs to the dining room. There we were greeted by the restaurant's Manager, who knew Evan and recognised me from the blog. We picked a table by one of the windows (this restaurant must have the best views in Prague) and we set to enjoy our lunch, which we paired with more beer. 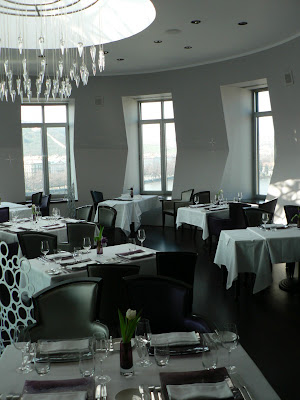 Céleste has already been reviewed here and here and much better than I could do, so I won't go into much detail about the food. I will only tell you that it was great, pretty expensive, but worth every Koruna paid by the NYT. The place is also gorgeous, I must add. 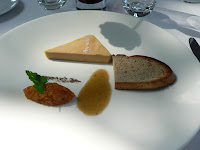 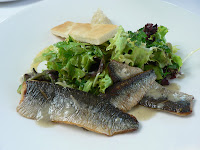 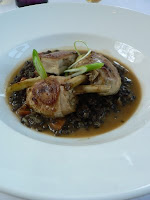 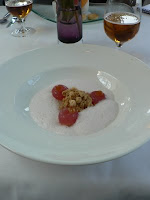 Not surprisingly, though, that unusual beer Evan had promised wasn't mentioned in any of the reviews. Professional restaurant reviewers rarely mention beer and when they do, it's not much more than an afterthought. So, I thought I will fill the information gap they left.

The brew in question is none other than Kout na Šumavě 12°, possibly the best pale lager in this country if not the world. Although it isn't all that unusual from the stylistic point of view, back then, Céleste was only the second regular outlet in Prague for this beer. 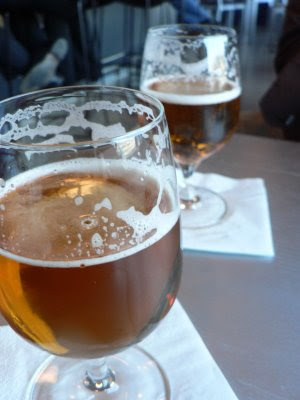 While we were sipping Kouts before going upstaris to eat, we had a very interesting chat with Edvard, the bar manager.

When they were finishing putting the restaurant and bar together, Edvard realised that he didn't want to offer the same old stuff beerwise. He contacted Evan, who recommended Kout. Edvard then went to U Slovanské Lipy to see what the beer was like. He liked it, a lot, and reached an agreement with Lipy's owner, who also happens to be the brewery's distributor for Prague.

We already have two winners in this transaction. The small regional brewery that gets more exposure in Prague for their excellent beers, and the client that can drink something of better quality.

The restaurant also wins, of course, and big time.

Oh! But things don't end there. Edvard told us how happy he was with that beer. He likes it a lot and the clients seem to like it a lot, too because they are selling three times more than they had forcast before opening!

If this hasn't sunk in, let me illustrate with some figures:

The beer is sold only in 0.3l glasses at 45CZK at the bar and 65CZK at the restaurant. Yeah, it is expensive, but this is a posh place, so you won't have a session (and I've also seen more outrageous prices at lesser places).

For that measure the wholesale price of Pilsner Urquell is 12CZK and Kout's is 9CZK. The profit for each glass (not counting other costs) would be 33CZK for PU and 36 for Kout (53CZK/56CZK at the restaurant).

Let's say that the people of Céleste forcast they would sell 100 glasses of beer over a given period. If they were working with PU the profit would be 3,300CZK. But they are working with Kout, which is selling three times more than planned. The profit for the same period is then 10,800CZK. Get it? That's right. That is what selling good quality beer can do to your balance.

How come then that a beer like Kout na Šumavě 12° at a place like Céleste is something so out of the ordinary? Why do most restaurants and cafés still offer the same old three or four brands or, worse, rubbish like Stella Artois or Heineken?

It's because that is what people want!. Screams a restauranteur.

Though a bit relative, it can still be considered a valid point if we leave out the imported brands. However, it can only be applied to hospody that live off selling beer. What beer is stocked isn't a decision factor when it comes to choosing a mid range or ethnic restaurant, pizzeria or café. At those places the people who want beer will usually drink whatever is offered. Working with a regional beer will not necessarily mean fewer clients; in fact, it could even mean that more people will end up going, I mean beer enthusiasts.

It's the bribes! Whispers someone out there.

It's well known that the big breweries pay sometimes generous bribes in order to get a pub to switch to their brands. But once again we are talking about places that shift beer in large volumes. Breweries will not pay hundreds of thousands of Crowns (I've heard about two million in one case) to a restaurant that will sell only a couple of kegs a week.

Well, but what about the freebies: glasses, the taps, sign at the door, etc?. Says another restauranteur with a bit of an attitude.

If we are speaking about a top of the range restaurant, where I will pay about 1000CZK or more for a meal (drinks not included), where the mark-up for a bottle of wine is 500-600% over the retail price, and the owner doesn't want to invest a few thousands in taps, then that isn't a place I would like to go.

If it's the other places what we mean, that's another thing, then. Fortunately, the regional breweries (at least some of them) have wised up and, if asked nicely, they would be more than willing to lend some taps and even put a lit sign. And why having only beer on tap to begin with? There are many beers out there that are great in bottle. And the bottles allow for more flexibility when it comes to putting together a beer list, and they can also be stored longer than the barrels.

So, all of you restaurant managers and owners that read this blog. You are out of excuses. Open your minds a little, think outside the box. It might be that you don't care about the breweries, beer or even the quality you offer your clients, for that matter, but you must care about your profits...

If you need consulting on this feel free to contact me. I'll be more than happy to help you, for no cost (well, perhaps a lunch).