In August last year the brewery changed owners. For almost a decade Pivovar Březnice had been owned by a company of American origin that focused mostly on the export market, giving little if any attention to the domestic one. The sharp fall in the value of the US Dollar against the Czech Koruna resulted in prices becoming uncompetitive and the yanks decided to pack their bags. Now the new owners are trying to recover the market that Herold lost. The return of Herold Pseničné was possible thanks to the head brewer who was able to talk his new bosses into allowing him to brew it again.

I had tasted the beer just before it was discontinued, it was only once, I think, and I don't remember much about it, so I was really looking forward to drinking it again. Instead of reviewing it alone, I decided to do a comparative tasating with the other industrially produced domestic wheat beer, Primátor Weizen. Both bottled, both while sitting on my terrace. 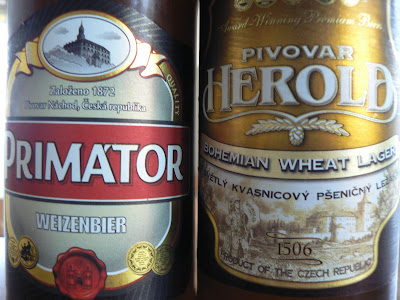 I started with Náchod's, with which I am very familiar and is know one of my favourite beers. It is brewed with a single decoction mashing, which makes it a bit of a rarity. According to Czech beer guru Honza Šuran, the only two beers of this kind that are brewed using this mashing method are Primátor's and Pivovarský Dům's. 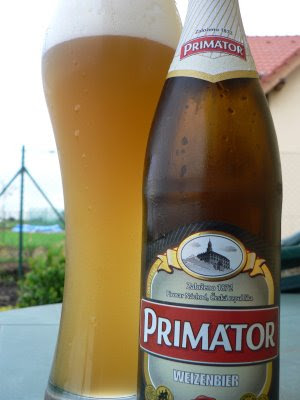 What else can I say about Primátor Weizenbier, only that it tastes better every day. It has a perfect balance of sweetness, bitterness and sourness that makes it very refreshing and tasty.

When Evan Rail published his review of Herold Wheat, Javier left a comment saying that he thought Primátor Weizen was better than German wheat beers. His opinion only managed to garner the incredulity of another reader, Elf. Well, I agree with Javier. I think Primátor Weizenbier is a better beer than the famous Bavarian ones (Schneider, Paulaner, Erdinger, etc) and it's on the same level, if not a bit higher, that most of the ones coming from smaller breweries that I've tasted. But this isn't adoptive nationalism on my part. Two German beer enthusiast with whom I spent an afternoon the other day agreed with this view. But of course, at the end of the day, it all comes down to personal tastes.

With Primátor having vanished from the glass, it was Herold's turn. It pours a bit paler and it's less aromatic, it isn't as rich, either. The flavours are milder and it lacks much of the spice and citrus notes that are so present in its competitor. At the same time, I found the malt a bit too dominant. It's not bad at all, I didn't dislike it. It is very easy to drink and it could be a great option for those who want to start discovering the world of wheat beers. And actually, qualitatively speaking, it could compete on equal footing with many of the Bavarian weizen, and even come on top of several of them. But as is the case with those from the neighbouring country, Herold Wheat is no match for Primátor Weizen. 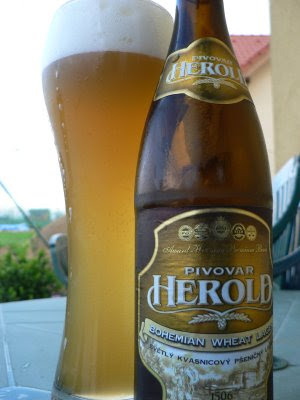 Tastes aside, I think it's great that we can now choose between two industrial Czech wheat beers. There is no doubt that the popularity of this style is growing. Primátor Weizen sells really well at those places that serve it. There also seem to be more micros that offer wheat beer (many of them wonderful), which are really popular in the summer months. Will we ever see the day when any of the best known names in Czech beer has a go at brewing a weizen?