By Pivní Filosof December 14, 2008
For many, beer means a yellowy drink of low ABV that is drunk at artic temperatures, many others, however, know that that isn't the way beer showld be enoyed, regardless of what the macros would like to make us believe. Yet few are those who would consider drinking beer at room temperature. The question then is: can you enjoy a beer at the same temperature you would drink red wine? It depends on the beer, of course.

The idea for this "experiment" happened almost by accident. One afternoon I fancied having a pint (strange, isn't it?) only to realise that I had nothing cooling in the fridge. I didn't feel like waiting for one to chill in the freezer, so I took a bottle of Bernard Černý that I had in the cellar (actually a little room under the stairs that keeps a few degrees cooler than the rest of the house), thinking that maybe it won't be bad. Even before opening the bottle I thought I could make a selection of dark beers to taste them at room temperature, all of them old friends. The results are the following:

Bernard Černý: The nose was of coffee sweetened with plenty of caramel, sweeter than when it's cold. It still tastes roasted and dry, though a bit silkier, followed by a mild acidity that fortunately is well balanced by a caramel base. I like it better cold, I prefer its roasted notes to the sweet. 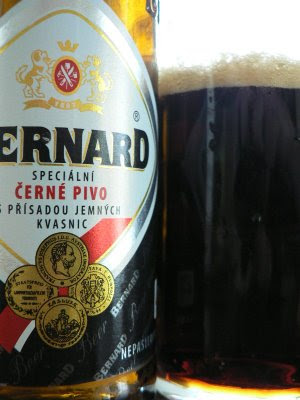 Herold Tmavé: This might be my favourite Czech dark beer. At room temperature it's a lot less aromatic and it tastes rather sweeter, in fact, I noticed it quite tuned down, almost like a tmavé from a keg that is not so fresh anymore. No doubt, I prefer it cold. 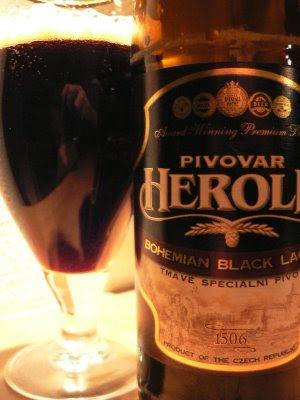 Pardubický Porter: I've always liked a lot the prune and port notes of this beer, even from the first sip I had long ago. Warmer, it is a very different beer, keeps its identity, but improves considerably. Together with the prunes, I felt also cocoa and black sugar in the nose, which I don't remember having noticed before. There is more cocoa and something akin to gingerbread and a lot less fruit in the taste. The alcohol is just as well integrated as in the cold version. I loved it! It feels warmer, makes you drink it very slowly, an ideal winter drink. 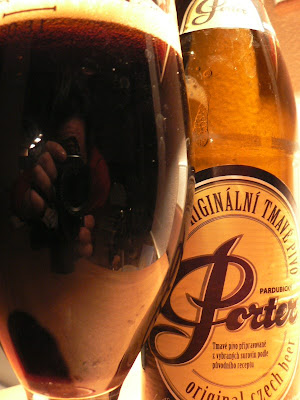 Primátor Double: It is the one that changes the least, though it feels somehow more mature. The only thing that bothered me was its excessive carbonation when pouring the first half of the bottle. There are still licorice, black sugar and some ginger notes. It tastes less sweet. The finish is short and dry, and it's the only moment that I noticed its 10%ABV. The effect it has after drinking is the same as when it's cold, mild drowsiness. 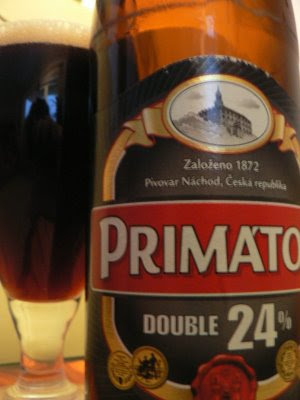 Of the four, I liked the stronger ones a lot more, with the one from Pardubice taking the top honours. I see them as excellent pairings for the Christmas biscuits that my wife is already baking, and the ones that my mother in law will bring (Man! Do I love those!). It will be nice to sit down and gorge with the biscuits and wahing them down with Porter or Double while watching the same pohádky as every year.

Which beers you normally drink cold would you like to taste at room temperature?