By Pivní Filosof December 10, 2008
I'm not a big Christmas person, but I have to admit that I do love the atmosphere that is generated in Prague when Christmas decorations start to show up in the streets (excluding the ones at malls that are put already in October, I hate those) and the markets. So one of the things that we were looking forward to seeing the most in Hrádec Králove were the decorations that would surely adorn Velké Náměstí, the town's main square, while enjoying something tasty at the Christmas market that we had no doubt would be there. 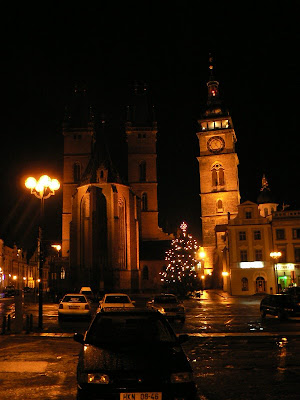 The impression we got was was of having arrived in the middle of January. Not a single light, only a tree by the Church Svatého Duha (of the Holy Spirit), that looked like something someone had forgotten to take away, and that was it. Of a market, not a hint. The weather didn't help either, rather windy, cold and threatening rain, very unpleasant. We walked around the streets, squares and alleys (very pretty all of them) for some time and started to think of looking for shelter, we both really fancied drinking something warm. 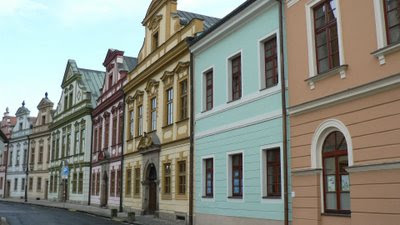 We had accommodated away from the centre, at the hotel U Svatého Jana. We had chosen it because we had gone there by car and wanted to park without problems or extra charges. The hotel, a very nicely renovated building, had a good bus conection and was considerably cheaper than something similar in the centre. We arrived there around midday so we decided to have lunch at the hotel's restaurant. Nothing to write home about, really. The soup, fine, what I oredered (jelíto, jitrnice, sekana with cabbage and potatoes), not bad; can't say the same about my wife's order (spagetti bolgnesa). The beer, not very well tapped Pilsner Urquell, actually I think they gave me Gambrinus (I didn't complain, just left a much smaller tip). From there we went to the centre.

Since we didn't feel like exploring anymore, we went to a place we had noticed earlier, a coffee shop that looked very nice from the outside and even nicer inside. I couldn't be bothered with making pictures, I was feeling a bit too relaxed, in fact, I can't even remember the name of the place (some guide I am, uh?). We liked it a lot, we ended up staying there for a couple of hours drinking warm things.

From there we went to meet Filip Helán, owner of Pivoňka, whose invitation to a Christmas beer tasting was the excuse for the trip. Filip had just arrived from Germany with a van full of beers of all kinds. While he worked we looked around the shelves and picked a few things to take back home and put under the tree. All that time people came in, looked around, asked a few questions and without exception, bought something. Filip is a real beerevangelist, he has managed to convice several friends to try something new and the result has been, in all cases, that the person never wanted to go back to what they were drinking before. I was happy to see the shop doing so well and that his initiative is generating more interest in lesser known Czech beers. 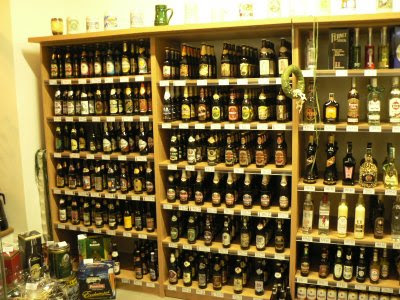 When he closed for the day we went together for dinner to U České koruny, a very nice restaurant located in a vaulted cellar (didn't make pictures either, but at least I found their webpage). We were lucky to find a table. The beer choice wasn't very special, Pilsner Urquell and Master 18°, which became my choice. Very well tapped, fresh, it paired really well with the grilled sirloin of pork with onions and mushrooms in red wine and roasted potatoes I ordered, which was delicious. My wife oredered svíčkova na smetaně, and ate five of the six houskové knedlýku, not leaving me a single drop of sauce for me to try, she said it was very good, I will have to believe her.

During dinner we chatted with Filip. He told us he had opened the shop in June, after having got tired of the stress and rat race of his management position at a financial services company. Now he says he is really happy to be working for himself, doing something he really enjoys. If only more people followed his example.

The evening finished rather early, we were all very tired and Saturday promised to be a very long and busy day.