By Pivní Filosof December 13, 2008
Svatý Norbert Vanoční Speciál model 2008 has given a lot to talk about. It was one of the seasonal beers that I was most looking forward to drinking again. Last year's had blown my mind. I described it then as "an explosion of hops that demolishes everything else", yet very well balanced by velvety syrupy notes. The kind of beer many dream about.

Velký Al tasted it before me and his review of the beer was a big surprised, and not at all pleasant. Al describes it like driking alcoholic honey. Then he would confess that he'd had "a couple" of pints before going to Strahov, so it might be that his senses were not very finely tuned. Still, just by looking at the photo he published in his blog made me realise that it was not the same beer. I remember model 2007 a couple shades darker.

I already had planned to make the pilgrimage to the Strahov Monastery, but fortunately, my weekly visit to Zlý Časy spared me the trouoble and saved me quite a few Crowns. Last year, in Strahov, the beer was listed as a 19°balling, at my favourite pub in Nusle, they had it as a 20°er. Honza, the owner, is a bloke who knows a thing or two about beer and I don't think he wrote the figure just like that. I ordered a pint as dessert after my lunch, which included Želiv 14° and Opat Vanoční 17° (tough life I have, I know). 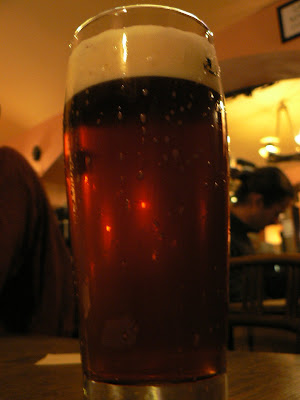 From the first sip it was clear to me that there was no chance I was drinking something remotedly similar to the beer that had amazed me last year. This one is more syrupy and the alcohol had a stronger presence, though not agressive. In short, I felt it was a version on steroids of their Jantár, the amber lager that Pivovar Strahov brews regularly. Not bad at all, but not as good as I would have liked, either.

The above mentioned Honza told me that he had spoken with Martin Matuška, Sv. Norbert's brew master, and that he insisted that the beer was the same as last year's. I also had a short chat with Mr. Matuška a year ago, then he told me that he didn't think many people would like such a bitter beer, but that it had come out just as he wanted. It might be that he was right then and that the owner of the brewery asked him to tone down the bitterness to make this beer more acceptable to the average taste.

And now I start thinking (beer glass in hand). I totally disagee with what many say, that beers must always be the same (I think that one of the macros' biggest achievements has been to make most people believe just that), I like it when a beer changes from batch to batch, as long as it keeps its identity and character. That is not the case with Svatý Norbert Vanoční Speciál. However, being this a beer that is brewed only once a year, can it be that either the brewery or the brew master fancy making something different every year? If so, is that the right way to go?

Whatever it is, go and see for yourselves now. It's very pricey, but worth it. If you miss it, you will have to wait for a year and who knows what kind of beer you will find then.