By Pivní Filosof August 16, 2010
As I've mentioned before, I really like this trend of aging or maturing beers in barrels. And what I like the most about it is what some brewers are doing, commercialising the "same" beer with and without the wood. That way, the consumer can what this additional process adds to the beer, decide which of them they like the most and if the additional price is worth it.

So far, I'd had tasted only one beer in both versions, with the barrel aged one being a massive success. One year in French oak, previously used for maturing wine, had turned a beer I didn't like at all into one I loved.

Now, thanks to my great friend Gunnar, I was going to have the opportunity to see what effect the barrel treatment had had on a beer I had loved, Nøgne-Ø Imperial Stout. Would this beer have improved after three months in Scotch Whisky barrels (as unsurprisingly promises the brewer)? 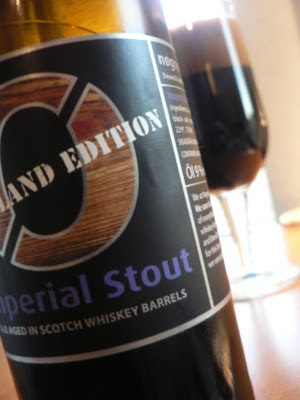 The Highland Edition of this Imperial Stout pours as black as the original one. As expected, the aromas are quite different, pretty mild, with roasted coffee, raisins and some whisky there in the back. It's got the same full body as the original, but the flavours are more "wintery". There is a very nicely balanced mix of coffee and sweet chocolate with a touch of dried fruit wrapped up by a shy touch of whisky in the finish. At times, it reminded me of a Port.

It's great as a dessert beer, a night cap or as reward after a stroll in a cold afternoon. Now, given the choice (and the price here isn't an issue), it's the original the one I'd pick. I liked Highland, but I did miss the rougher, wilder side of the unwooded version. Those three months in a barrel tamed this beer too much for my taste.

So, for the moment, I have a tie at one between wooded and unwooded versions of the same beer. What about you?