By Pivní Filosof July 07, 2008
A couple of weeks ago I had a very pleasant visit, Knut Albert, a fellow beer blogger from Norway. He was in Prague on a business trip and, as it is his custom everywhere he has to go, he decided to spend an extra day in order to explore the local beer scene.

He arrived on a very warm Sunday. I went to pick him up at his hotel and we both went straight to Zlý Časy to enjoy the brewing wonders of Plzeňský Kraj, from there we went to Pivovarský Klub to have a couple more pints and pick a few bottles to take back to Norway.

It was an ideal afternoon to drink excellent Bohemian Golden Lager, chat about beers and life in general, and have a very good time. It's really remarkable the effect that our beer passion has. Two total strangers, different ages, from different cultures who had never seen each other before can have a great and extended afternoon with nothing more, nor less, than beer as the excuse.

I wont go into the details of the meeting, if you are interested, you can read about it in Knut's blog, here and here.

Knut didn't come empty handed, though, he brought five samples of Scandinavian beers, for from his country and one from Denmark.

Like most people, my knowledge of Scandinavian brewing was pretty much limited to Carlsberg, Tuborg (I'm I repeating myself) and other stars. Of course that, by no means, I thought of them as good examples of what you can drink in the Northern lands. My curiosity, thus, was pretty high, I didn't know what to expect. But I trusted Knut's choice, I was sure he hadn't brought the first stuff he could find at the nearest supermarket in Oslo. Still I didn't have any bar with which to measure this beers coming from a region with a long brewing tradition, but with a strongly eurolagered recent history.

Before beginning to taste this beer I realised how good it is not to have any expectations when you are going to drink something for the first time, other than, of course, the factual information found on the labels. It helps to make a more objective evaluation, although it still depends a lot on personal tastes. 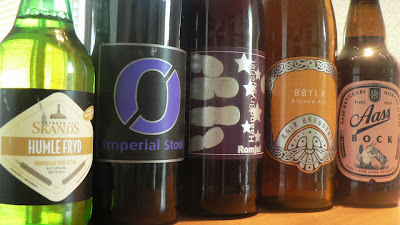 I started with the oddball of the group. Humle Fryd, brewed by the Danish craft brewery Bryggeriet Skands. As far as I can gather from the label in Danish, this beer was inspired by Pilsner Lager, and was brewed with Saaz Hops. It came in a 25cl bottle (there is a reason for that, you'll see). Just after pouring this pale golden beer into the glass you realise that the label wasn't lying. The flowery scent of the Saaz hops is simply everywhere, leaving just a little room for some sweet fruit notes. The fruit are almost nowhere to be felt when drinking it, though. It is very dry and almost the only thing that can be tasted is the hops. I really like very hoppy beers, but this one in particular I found out of balance, and with a body suspiciously light for its 5.5%ABV. I wasn't a fan. Now, this little bottle came from a plane leaving Copenhaguen. Humle Fryd might not be among the craft beers I've liked the most, but it is sure a massive step forward compared to the canned eurolagers most commonly served on board of planes. 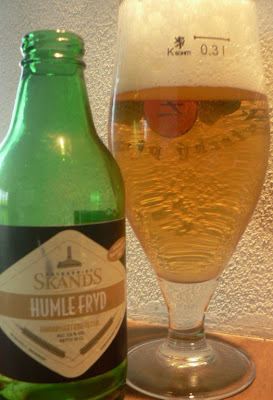 The next one was Aass Bock. Aass is, if memory doesn't fail me, one of the most important bottlers in Norway. As expected for a Bock, this beer pours down a dark amber and it's topped by a compact slightly tanned head. I felt sweet notes that reminded me of vanilla and fruit. However, when drinking it, I felt a pleasant balance between coffee and ripe fruit. Nice beer to drink with smoked meats. 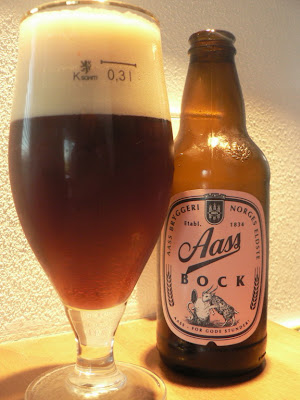 It was the turn of the craft beers from Norway. The first one I chose was the one that intrigued me the most when reading the label. Romjul, from Haandbryggeriet, which for what can be seen on their web page, must be a pretty interesting micro brewery. Contrary to what is common in most country, this Christmas beer, brewed with wheat and Munich malts has only 4.5%ABV, which could make it a session beer. And a very good session beer it would be! It's dark amber, cloudy and with a tanned head. It's not filtered, nor pasteurised and it's bottle fermented and has natural carbonation and the right amount of sediments. The nose is mostly fruity acidity that tries to hide roasted notes of a rougher character. I found it simply delicious. The more subtle flavours of the wheath malt are a perfect contrast to the dry roasted ones of the Munich malts. All while licorice and sour cherries in syrup round up and give more character to this brilliant beer. 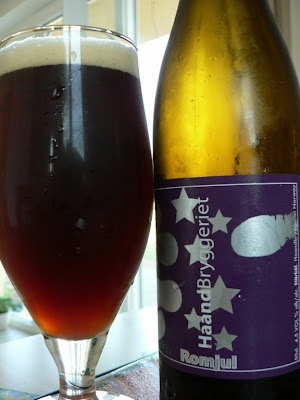 It was followed by Bøyla, from Ægir Bryggeri. Knut told me that the brewery is located in the Fjords, at the end of a trail very popular with tourists, and they exploit the viking theme, as it can be seen on the label. This blonde ale with 4.5% is rich gold and slightly cloudy. I felt tropical fruit and quite a lot of yeast on the nose, which gave it a character similar to some Weizen. It is drier than expected when drinking it, citrus fruits is what predominates and it has a very refreshing light body. It wouldn't make me go all the way to fjords to get it, but I would sure be very happy if I found it after a long walk. 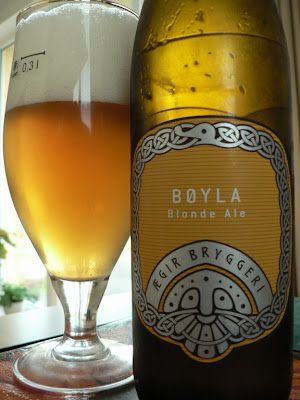 I closed this round of Nordic beers from the strongest of the lot. Ø Imperial Stout, from Nøgne Ø Bryggeri. According to the comprehensive information found on the label, this beer has 9%ABV, 75IBU and it's fermented at 23°plato. A powerful beer, at least on paper. And it is so in reality, as well as very robust. It's brewed using Maris Otter, Munich, roasted barley, oat, black, and chocolate malt; Columbus and Crystal hops; English ale yeast, and the local Grimstad water. Quite a stew! And what a black beer this is! When pouring down it looks like too strong and thick coffee. The head is creamy and almost brown. The nose was a bit acid, with some molasses and coffee notes. It tastes like very strong and bitter coffee, not espresso, but drip. The alcohol can be felt a little, but it's still very well integrated, it does not disturb, it's actually a bit like a well placed "drink with moderation" warning on a billboard. The finish starts with some caramel, but it is again the coffee what we are left with, for quite some time. A very interesting beer, great for a winter afternoon by the fire. I really liked it. 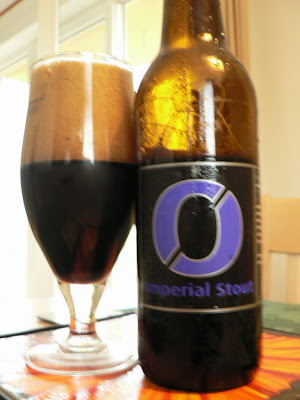 Thanks Knut for sharing this very good and interesting bunch with me. But most of all, thanks for the visit and for the opportunity of meeting and sharing our passion. I hope you are enjoying the beers you took with you from Prague.