By Pivní Filosof July 10, 2008
The other day we went to visit some of my better half's relatives in Strakonice, a city at about 160km south of Prague. The excuse, a family celebration. The weather was ideal to sit in the garden, grill something and drink plenty of beer (well, actually, any weather is good for that). The beer of choice was, of course, from the local brewery, Pivovar Strakonice, mostly their Švanda, a new member of the team that seems to have replaced the locally popular "10". As its predecessor, this is a pretty good session beer, light bitterness, but with plenty of body and malty flavour for its 3.8%ABV. But there was one thing that caught my attention on the label.

During and after the presentation that Pivovar Strakonice gave last November at Pivovarský Klub, Evan Rail and I nagged about some bits of the company's marketing. Among them we ranted that, although being so, it wasn't mentioned anywhere that the beers were unpasteurised. When I asked the brewmaster why they were failing to mention something that many beer lovers see as an important added value, his honest answer was that he would bring it up to the marketing director. And so it seems, if you look at the picture below, you'll notice on the lower part of the label a word that does not need translation 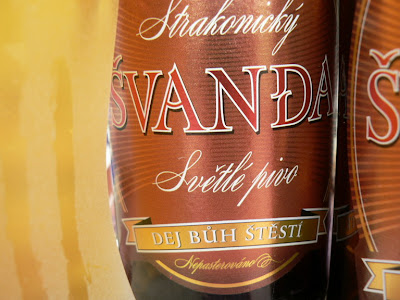 "Nepasterované". When I read it, I couldn't help but smile and point it to my wife, while my chest was swelling a little. It made me feel good to see that our rantings had been paid attention to and that they've had some influence in the beer world, at least in the shape of one word. Yet it seems that it wasn't the only thing the people of Strakonice paid attention to. They have come out with Klostermann, an amber lager with 5.1%ABV. I agree with Evan on his review of this beer, it is very good. In the same category as Primátor Polotmavé 13° and Herold Granát, though maybe not as good. Still, I would put it a step above Master 13°. I really liked its contrasts of caramel notes with a refreshingly herbal bitter finish. So far, it can only be found at the brewery, but let's hope they will start distributing it in the rest of the country. It also seems that Dudák has become the flagship brand of the brewery, Nektar and 10 have already left the building. 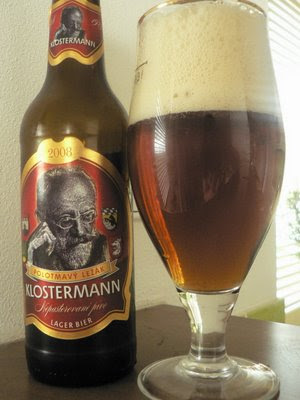 Back to the family angle with which we started, the following day we went for a walk by the Otava. There isn't much to see in Strakonice. Except for the castle and a couple of buildings in the centre, the rest is a showcase of Communist good taste. However, the walk by the river is lovely. Full of trees and green, and with playgrounds for children every few hundred metres. It also goes by the brewery, which unfortunately was closed that Sunday; still we could feel the, for me, lovely smell of fermenting beer coming out of it. We found a beer garden that had just opened to sit down and refresh ourselves with some pivo. On the way back we noticed that the small beer garden next to the brewery had opened. I would have walked right past it hadn't it been for a sign the announced Kvasnicové 12°. Being a fan of this kind of beers, I followed my feet and quickly walked to the bar, regardless of my wife's reproaches. Unfortunately, sitting down to enjoy this beer in a proper glass was out of the question and I had to compromise and take it in a plastic cup. It was a pity because if it looked as well as it smelled and tasted, it would have been a beautiful thing. Perhaps, and due to the recent high temperatures, the beer as already going off, yet it was still delicious. Yeasts ruled the nose, reminding me of some German Wiessbiers, behind them, there were maltyness, grain and flowers. The taste was hugely refreshing, again with the yeast governing, here more Belgian like, the rest was tropical fruit and some herbs. I enjoyed every drop of it and prayed that some day someone will bring this beer to Prague. Maybe I should talk to my friends in Pivovarský Klub or Zlý Časy.... 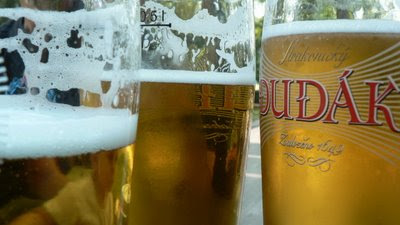