When I got to the end of the tree lined street I could see the trolleybus leaving. I would have to wait. Not for too long and, fortunately, it had stopped raining, at least for the time being.

I got off in the centre, at the stop Muzeum. I had to take the tram 4 to get to my next destination. For that I would have to walk a few hundred metres across Smetavý Sady. A walk I would have sure enjoyed a lot more had it not started raining again.

By the time I got to the tram stop, in front of the imposing Synagogue of Pilsen, the Sun had come out, again. The tram arrived very quickly and it less than ten minutes left me at the stop Sokolovská. I was only a few metres from U Rytíře Lochoty. 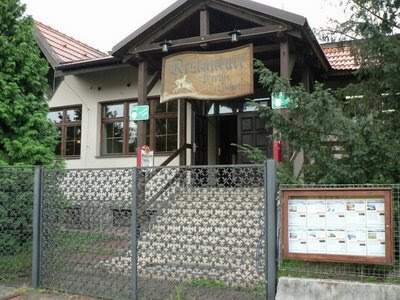 It's far from Purkmistr, not only distancewise but conceptwise as well. While the hotel and brewery opened last year boasts the fact that beer is made in the premises, Lochoty, opened in 2001, but looking older, is more a neighbourhood hospoda where they happen to brew beer. Actually, when walking through the door one could have the impression of being in the wrong place, since Pilsner Urquell and Gambrinus signs are the first things noticed, instead of the almost mandatory bronze kettles. 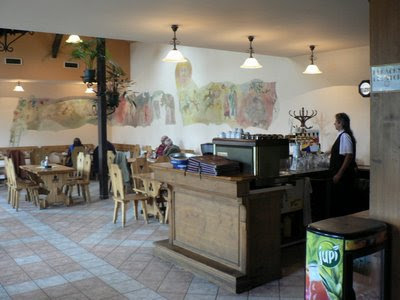 This doesn't mean that Lochoty is an unpleasant place, quite the contrary. The rooms are spacious, with nicely decorated walls and the tables aren't packed together, but have enough space between them.

The waiters are also a bit of the old fashioned school. Few words, less smiles, but nonetheless efficient and attentive.

I ordered a 11° and a nakladaný hermelín, I suddenly had a massive crave for the marinated cheese. Neither took too long to be brought to my table.

U Rytíře Lochoty's jedenactká es of really rich cold colour, almost orange. It's got a very pleasant nose, where pears, herbs and syrup come together seamlessly. The first thing I felt when drinking it was fruit in syrup followed by mandarin notes. It was too carbonated for my taste and that made it a bit heavy. The finish does not improve things, starts bitter, with a lot of potential, but the aftertaste it leaves is sugary and not at all nice. Now, at 20CZK for a pint, it's not bad, but it could be better. 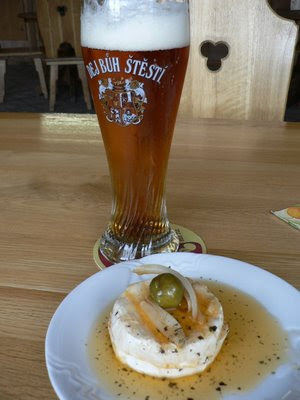 I finished my hermelín, which was really delicious and waiter for the 14°. I must admit that my expectations were not very high now. Fortunately, I was wrong. The 14° is all that the 11° wants to be, and still more. Almost identical in looks and with a similar nose, with a bit more intense notes maybe. The change, and improvement, can be better noticed when drinking it. A more unctuous mouthfeel. The syrup notes are more assertive, but still there is an important amount of fruit dancing in the mouth. The finish is dry, herbal and slightly acid. Delicious and, curiously, easier to drink than the lighter version. All for the sweet price of 24Kc a pint, what a bargain! 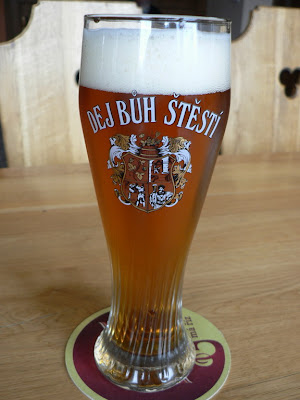 Again I had to resist temptation, this time of ordering another 14°. Although it does not fit the usual model of a brewpub, I liked U Rytíře Lochoty a lot. It seemed to me a great place to meet for a beer with friends. Well worth the trip. 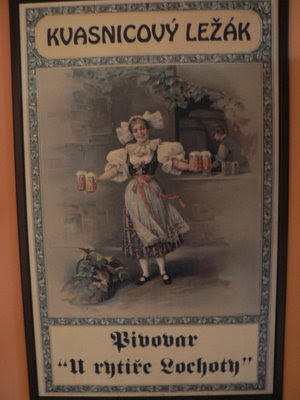 But my mission was not fulfilled yet. I had one more stop to make. I had to go back to the centre, LOTR awaited me...