And here it is!

By Pivní Filosof August 02, 2010
Those who follow this blog or have met me in person already know very well that Zlý Časy is my favourite pub, bar none. And it seems I'm not the only one, the place is packed almost every evening.

Its success is not only thanks to the 24 taps, all rotating, all with beers from regional and micros both domestic and imported, but also to the condition they are kept, their variety (the other day there were 5 wheat beers, 4 smoked, 2 ales, one German keller, etc.) and to the fact that the place has never lost the atmosphere of a neighbourhood hospoda. Every time I go I meet someone or start a chat with someone new, sometimes they are people who, overwhelmed by the choice seek the advice of those who sit at the bar.

None of this would be possible without the energy and the healthy bit of madness of Hanz, the owner. Hanz is someone knowledgeable and passionate about beer and also hard working, ambitious, open-minded and above all, a top bloke whom I consider a friend. 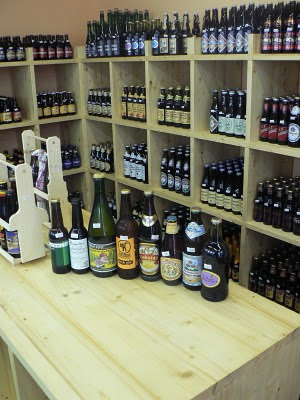 Not satisfied with having the place to go for a pint in Prague, he decided he would open the shop to go to buy bottled beer in Prague (and maybe even in the whole country). Motivated by the success he had with those American, etc. beers he imported earlier this year, he began to look for a good place to set up a "pivoteka". The plan was simple, to have the biggest assortment of beers from as many countries as possible. For that, he needed an appropriate premises, preferably, near the pub so he could use the cold storage he rents fromt a neighbouring butcher's. He was lucky, late last Spring a small shop right next door became available. 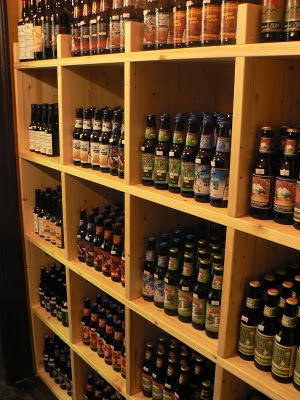 Some of Pivoteka Zlý Časy is still a work in progress, the decoration isn't finished yet, it needs a proper sign on the street, etc. But the most important thing, the beers, is already there. For the moment, there are 300 varieties to choose from that include names like De Molen, Dupont, Schlenkerla, Mikkeller, Anchor and the domestic Kocour, Tambor and Matuška among many, many more. Prices are a bit lower than at the pub for those beers that are available at both places. Visitors who won't know what to choose don't have reason to worry, the girl that works there who, besides being really friendly, has tasted many of the beers she sells and will be more than happy to help you make up your mind. Plans for the future also include an e-shop, delivery service and credit cards. 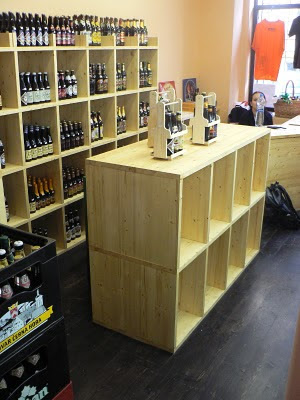 It seems amazing that not even a year and a half ago I was ranting at the lack of quality imported beers. Now, thanks to Hanz and his vision, I have nothing to complain anymore.