Another surprise from Barcelona

By Pivní Filosof July 26, 2010
It is very nice to see brewers (or anyone, actually) that will take a bad review for what it is, one of the realities of life, and will not be offended when someone publicly says that they didn't like their beer, or even that it was bad. One of those brewers is the Spanish Companyia Cervecera del Montseny, who are also very confident about their products.

Last year they sent me samples of three of their beers. One of them, +Lupulus, I liked a lot, another one, +Negra, I didn't like so much and the remaining one, +Malta, I didn't like at all. After publishing my review, we exchanged a couple of emails, and that was the last I thought I would hear from them. However, a bit over a month ago Julià, from the brewery, wrote me again saying that they wanted to send me a sample of their most special product +malta Cuvée, which arrived in the company of two bottles of +Lupulus (I still like it a lot) and +Malta (I still don't like it, even with the wheat out of its grist. But since Julià told me they are very happy with it, the problem is more mine than theirs).

To be honest, my expectations were rather low. The base beer is, as you can well imagine, +Malta, which not only I don't like, but I didn't see it had the chops to be barrel aged. On the other hand, I was very curious. The beer ages one year in French oak barrels and then is blended with some fresh +Malta before bottling. Unlike all the other barrel aged beers I've had, this one is not strong, it only has 5.1%ABV.

What a surprise it was! 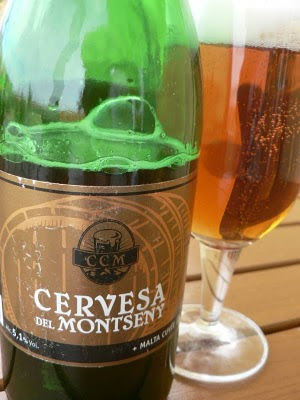 Just like its younger, unwooded version, +Malta Cuvée pours and orange shade of amber, but cleaner than the base beer. The nose is full of sour oranges with a mild fruity-flowery base to compensate. It's medium bodied and the flavours follow the same line as the aromas. It's very well balanced and tasty and it is nice to see that the hops, which is what bothers me the most in +Malta, are much more attenuated. It still lacks a malty character, but it works in its favour here.

I really enjoyed it a lot. I would lie if I said it's complex, it isn't, it's "just" very flavourful. On the other hand, I couldn't help but notice a certain resemblance with Russian River Supplication and that Chardonnay I had later that day thanks to those lovely sour orange notes.

I wrote Julià to ask what kind of barrels did they use. She confirmed that they were French oak and that in this case, they had been used once to age red wine from Penedes. That was it! Julià also told me that there is a new batch aging in eight barrels (the one this bottle came from was four barrels), four of them have also been used once for wine. It would be interesting if they sort the bottles according to which barrel they come from.

In short words, +Malta Cuvée is a very good beer. Very different from all the other BA's I've had so far, though I don't think it should be compared to any of them. Once again, this is not a 10%ABV Imperial Stout or similar, nor something that has aged in the company of cherries or been deliberately infected with brettanomyces, this is just a 5.1% ABV Pale Ale. I also see it as a good option to show wine geeks what can be done with beer.

Thanks a lot Julià for this lovely beer and congratulations for a job very well done.