By Pivní Filosof July 05, 2010
About a month an a half ago I had lunch with my good German friend, and fellow beer enthusiast, Stefan. Unfortunately, the speed of modern life did not allow us to spend together as much time as we would have wanted, but we still had the chance to exchange a few beers.

Stefan brought me six samples from microbreweries from the Black Forest region. With the exception of one, all of them promised to be simple beers, you know, those that deserve more praise, without any gimmicks or imperial pretensions, and all with an ABV of around 5%. 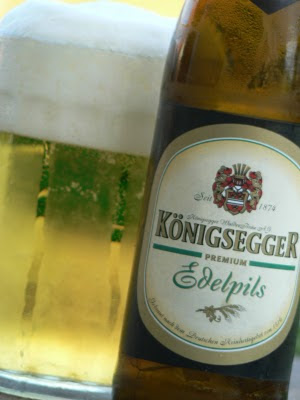 I kicked the session off with Königsegger Edelpils. It pours a very, very pale yellow, something very unusual around here, but that I've already seen in other German equivalents of světlý ležák. Not much, if anything, to say about the aromas (though the glass might not have been the most appropriate to evaluate them) and with a taste as mild as its looks, where I felt notes that reminded me to grass, some resin and maybe a bit of fruit. After an afternoon of (what at least for me is) hard work in the garden this beer is a rewarding refreshment, but at the same time, it made me understand better why Stefan prefers the Czech "Pils" to the German ones. 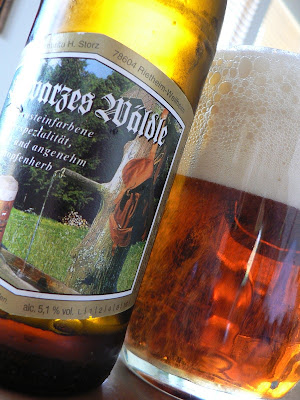 This was followed by two darker brews, Schwarzes Wälde and Günter-Bräu Edles Lagerbier. My friend told me I had to drink them together since they were supposed to be the same style. Following his advice I opened Schwarzes Wälde first, which poured brown-ocher and with a lot of bubbles. The nose was pretty simple, caramel and fruit. In the flavours I found home made sponge cake, some ripe fruit and a dry finish between the herbal and the piney. A very nice beer. Simple, tasty and pleasant. It calls for another one that unfortunately wasn't available. 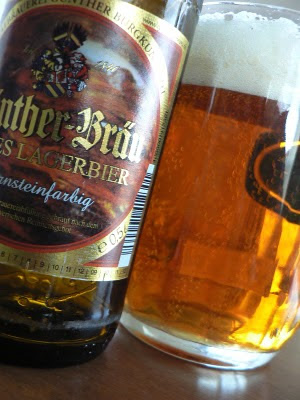 Unfortunately, Günter didn't arrive in the best of shapes. It pours a bit paler than the previous one, and like that, it's very fizzy. The nose is a somewhat maltier, but there was something in the taste that didn't quite fit. The best description I can think of is artificial honey flavouring in some cheap candy. The first sip surprised with its intensity, by the second and third it had got boring and from then on I started to get the impression that this beer might be in bad conditions, oxidised perhaps, though I might be wrong. Whatever it was, I didn't like it one bit.

Later it it was time for two more Pils, one Schussenrieder Fasnet Sud, "unfiltriert", and the other, la Ruppaner Schimmele, Naturtrübes. Before going on and unafraid of looking like an idiot, isn't natürtrub the same as unfiltriert? Thanks for the answer, just be nice. Now, to the beers. 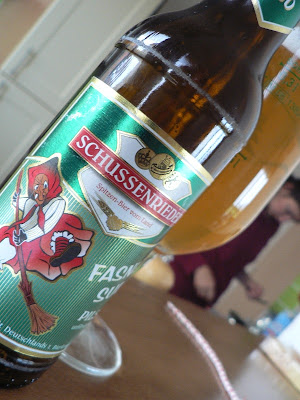 Schussenrieder reminded me a lot to more than one světlý nefiltrované from Czech micros, which isn't bad at all. Nice malty base with notes of fresh white bread and a mild bitterness to wrap things up. A pity it only came in a small bottle, I wouldn't have minded drinking a couple more. 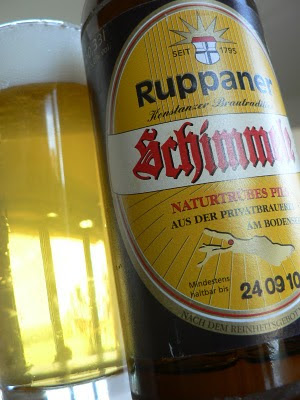 Ruppaner, on the other hand, felt like an unfiltered version of the first beer of this session, perhaps a bit more citrusy. I didn't like it so much, in fact, I would say I'd rather drink Königsegger. 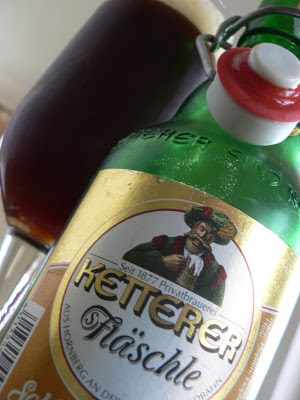 To cap this long session I left the only beer that was different from the rest, Ketterer Fläschle Schützen Bock Naturtrüb, with 7.5%ABV. According to Stefan, this beer was fermented with yeasts commonly used for stouts. I have to confess that I didn't notice anything out of the ordinary in it. It pours dark amber, the nose is mostly toffee with some flowers. It's got a nice, velvety mouth feel with a mix of caramel, licorice and sweet coffee. What the unusual yeasts brought to this beer, I can't say, and actually, it doesn't matter, I liked this beer plenty. Nice to drink in an early autumn afternoon when the sun goes down.

Thanks Stefan for these beers. Hope you liked the ones you got from me.