By Pivní Filosof May 13, 2009
When I first heard about Pivovar Tambor, in Dvůr Králové n.L. I didn't pay too much attention to it. I thought it was another brewpub like the many others that have opened in the last couple of years.

I was wrong (I must learn to pay more attention to local beer news, I think). I turns out that Tambor is a micro-industrial brewery. And it seems that its owners are no fools and have planned things quite well. Their aim is to be brewing 6000hl p.a. within a year. The current capacity is just below 8000hl, and the good news is that they have more than enough space to expand it and are willing to do so if business demands it.

The brewery's product line isn't anything groundbreaking. Currently they brew four beers, all of them lagers; three of them, the 10°, the 11° y the 12°, are pale. The remaining is an amber of 13° Balling that is still lagering its first batch. They are also preparing kvasnicové versions and if ordered, the beers can also be sold unfiltered.

The reason of such conservative portfolio is that the owners know their market very well. They have already secured deals with several hospody in Dvůr Králové and they know that the patrons haven't got very sophisticated palates and are more than likely to reject anything that strays too much out of the stuff they are used to drinking, more so when it is from a new brand. The brewery is looking for clients in Prague and it seems they have already agreed with a couple of hospody, which will tap the new beers at least occassionally. 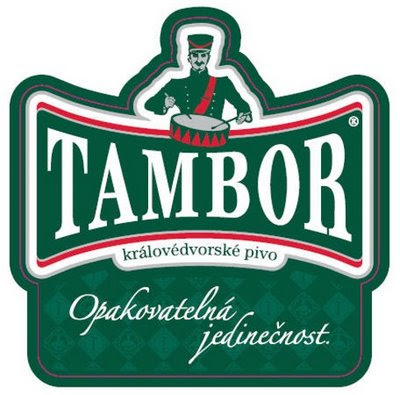 I've been able to taste two of them. The 11° and the 12°. They are impossible to tell apart visually. Both are very, very pale gold, with compact bright white head and no visible carbonation (as it should be with a well brewed and well tapped lager).

The 11° has an intense grassy aroma, very fresh. It's got a pretty hoppy taste, quite a lot of Saaz there, with just enough malt to avoid becoming boring. What a great session beer this is! Light bodied, smooth, it goes down easier than mineral water and the finish lingers long enough to have us have another sip. While I was drinking it I could almost feel myself sitting in a beer garden knocking down pint after pint, after pint of this Tambor while having a good time with friends (Oh! If only Prague's beer gardens had decent beer!).

The 12° is very similar to the previous one. Fuller bodied, a little maltier. It might lack some personality (a bit more fruit notes would give it more character), but it's still a very well brewed lager and more than adecuate to drink with lunch.

I really want to have a go at the other two, but more than that I want Pivovar Tambor to be sucessfull. In this day and age it is really nice to see someone taking a risk and offering quality. May the drums keep rolling!