By Pivní Filosof May 21, 2009
The other day I did the first tour of my project Bohemian Beer Tours and it was a great success.

It wasn't any of the tours I offer as standard. It was something special in many ways. The client was a group from Boston University Executive MBA that was in Prague doing research on beer tourism in the Czech Republic.

They had contacted me a couple of months before because they needed some "local expert" to give them information and feedback on their plan. Since I was then preparing the Bohemian Beer Tours project, I thought I would offer them to arrange a brewery visit.

The group was 30 people. Fortunately, they already had transportation arranged. The trip had to be in the afternoon and getting to the brewery shouldn't take much longer than one hour. The group not only wanted to visit thesite as any other tour group would do, but also wanted to meet someone from the brewery's management and ask them technical questions about the brewing process and about the brewery as a company, its plans, challenges, etc.

It wasn't very easy to arrange something like that. Fortunately, the people of Pivovar Klášter accepted the proposal and things couldn't have turned out any better.

I was told that the only member of the management that would be available on that day would be the head brewer Mr Vladimír Pelanta. Great was my surprise when one of the people waiting for us at the entrance of the brewery was Mr Ctírad Kábrt, the Business Director, who had changed his appointments so he could join us.

The tour of the brewery itself wasn't too much out of the ordinary. Ms. Lenká Nosková guided us through the facilities, starting at the room with the mashing tuns and coppers and then going down to the underground corridors where the brewery is fermented and lagered. 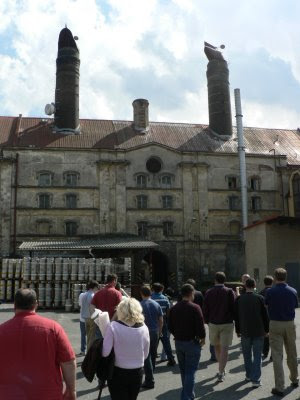 After that, and after drinking some beers tapped straight from a lagering tank, we went to the brewery's restaurant, Skála, that is located in one of the tunnels that was carved in the 12th century to accommodate the monks that built the now disappeared monastery. The restaurant only opens Fridays and Saturdays, but I was able to get Mr. Raitr, the person in charge of it, to open it for us to have there the meeting with the management. We had a snack (smoked ham roasted on a spit) and a couple of beers and the Q&A session with Messrs Pelanta and Kábrt started. As I did during the tour, I translated all questions and answers and I must say I did one hell of a job! In fact, I believe thanks to my translation the representatives of the brewery, Nosková, Pelanta and Kábrt, felt more relaxed and were able to tell us more interesting bits than they could have if they had to do it in English. (All that information is reserved for a future post).

I am so happy with the way things turned out! The group from Boston University were very, very satisfied, everyone agreed that this was the best activity of the many they had during their stay in Prague, and they were also very happy with the amount of very useful information the got from Pivovar Klášter as well as from me.

The first trip of Bohemian Beer Tours was an overall great success.

I also want to take this opportunity to thank the people from Pivovar Klášter, who were so great and accommodating. Without them it would have been impossible for things to turn out so well. And I would recommend all of you to visit this brewery, it's got a pretty interesting history and it's something quite unique. And if you need some more information about how to visit this and other breweries, you know where to go.