By Pivní Filosof May 06, 2009
Zlý Časy may lack nice toilets, space, non-smoking area, proper ventilation, etc. What it doesn't lack, however, is ambition.

Since he left the macros behind, a bit more than a year ago, the owner has aimed to turn his hospoda into the top spot for beer lovers in Prague. Not only there is an increasing focus on Czech craft beers, but also three fridges (with more to come) have been added recently that are filled with bottled Czech Speciály and imported beers, many of which rarities never before seen in this neck of the woods, all can be bought to drink there or for takeaway.

If that wasn't enough, Zlý Časy has commissioned their own beer. And I'm not speaking about a beer of regular production with a new name. This is something custom made. Zabiják z Nuslí was brewed by Petr Burianek at the facilities of Pivovarský Dvůr Chýně. 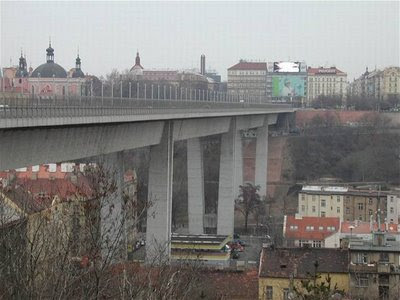 It's named after a book, but the label  gives it a black humour twist, it pictures Nuseslký Most (Nusle bridge), a favourite destination for suicides of all ages (the name means The Killer from Nusle). The beer is a 17° Balling polotmavé with a "very Chýně" nose and a taste that starts up with fruit and caramel, but that soon switches to a rather intense hoppy bitterness. It is dangerously easy to drink and, though there are a few rough edges that need some polishing, it is a very well made beer by all means. 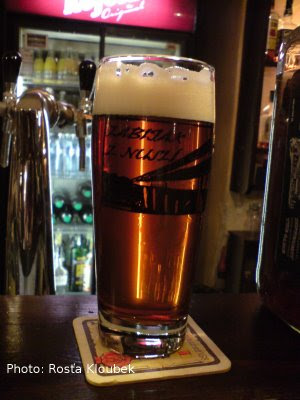 And it is selling really well. The 1.5l PET bottles are selling like warm bread and they are tapping about a 50l keg every two days. If my maths are right, of the 1000l that were brewed, less than a half is left, so hurry up if you don't want to miss it.

And if you do miss it, well, you will have to wait until next year. This 17° polotmavá is only a seasonal beer. The summer Zabiják z Nuslí is already on the drawing board and I can already tell you that it's going to be a Witt.

Wouldn't it be nice if more pubs and reastaurants were managed by people who like thinking outside the box? I really hope this idea will catch on and will be copied, just like it's happening with the "rotating" tap model pioneered by Pivovarský Klub.