By Pivní Filosof February 16, 2009
So far, most of the Norwegian beers I tasted were of the craft type, some of which I liked a lot. However, as it happens everywhere else, they aren't the beers most people drink.

The Norwegian law that regulates the sale of alcoholic drinks seems to be tailor made for the macros. Only beers with a maximum ABV of 4,75% can be sold at shops and supermarkets, the rest (together with wines and spirits) can only be found at the bottle shops owned by the state. There are also restrictions on when beers can be purchased, and taxes on alcoholic drinks are incredibly high. All this, together with the considerable distances in Norway, put a lof of obstacles to craft brewers. It isn't strange, then, that the market is dominated by a couple of brewing concerns, and we all know what that means.

My friend (and also fellow beer blogger) Kristian brought me five samples of industrial beers from his native country. One from Ringnes and the rest from Hansa, his local macro.

Needless to say, my expectations weren't too high when I started with the two Pils, the one from Ringnes and Hansa's. 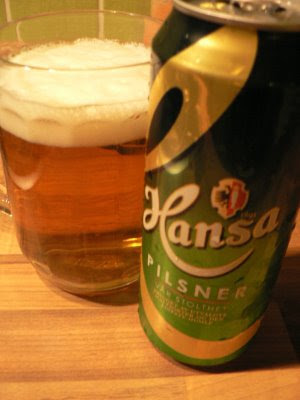 I'm going to save you (and myself) time and will transcribe my tasting notes as if I was talking about one beer. Pale gold with rather excessive carbonation, short life head. Not much of a nose, with a slightly metallic note (though that could have been from the can). Body lighter than an anorexic ballerina. Bordering the insipid, boring, with a bit of malt by the end. The only difference is that Hansa Pils is a bit more bitter, like someone, more by mistake than design, added a few more hops pelets in the boil. 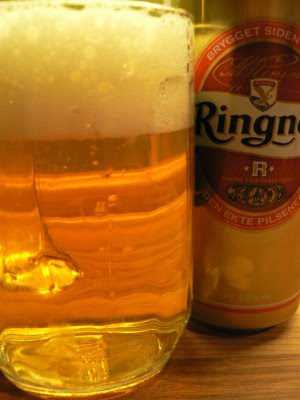 I was already prepared for a parade of corporate uniformity when I opened Hansa Bayer. Pours coppery, less carbonation, more head. The difference is not only to the eye, but also to the nose, mild caramel notes with something dry in the back, like dried herbs. Some more body (the ballerina was put on a highly calloric diet). Caramel is the most assertive bit on the palate, with some fruity undertones. The finish is dry, but the caramel is always there. I have to admit that I enjoyed this one. I tasted like a bit of a watery version of a good Czech polotmavé. 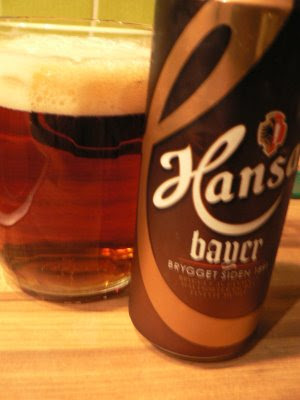 Since we still were near Christmas, there had to be a seasonal beer. Hansa Jule Øl. Like the rest, with 4,75%ABV (in fact there are several breweries in Norway that brew two beers for Christmas, one to be sold at shops, the other, stronger, for the state monopoly). A tad darker than Bayer, less aromatic. It also tastes a bit like Bayer, though more boring and less well balanced. To make a Christmas analogy, it was like a gift you buy for that relative you don't care too much about, but you still have to get them something. At least the do brew something special for Christmas, unlike some Czech breweries that only put a seasonal label on one of their regular production beers. 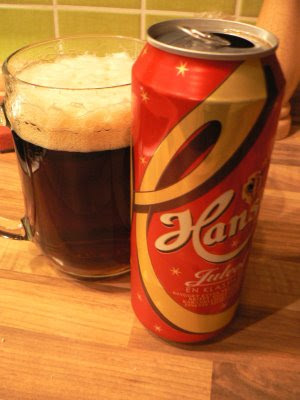 I left Hansa Pale Ale for the end. It was the one I was the most curious about. An ale among all this macrolager, and a craft one at that. Kristian told me that Hansa runs a microbrewery where new recipes are tried, those that turn out to be popular, are brewed on a regular basis. I think Pale Ale is one of them, but it does have that family resemblance. Pours light amber, bronze. Not much of a nose there, a bit dry, some fruit. Watery, boring, mild caramel in the finish. Terribly weak. 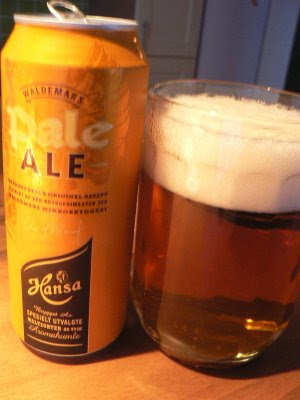 Not very memorable beers any of them. If I was in Norway, I would choose Bayer, but not with a lot of enthusiasm. The rest are archetypically macroindustrial, even the "craft" one. I'm glad for the Norwegian beer lovers that they have a far more interesting, albeit limited, choice among the real craft breweries.