The battle of the Exotic Stouts

By Pivní Filosof February 06, 2009
Many of you might already know my attitude towards styles. I don't care all that much about them. I don't judge beers based on what style is written on the label, but on whether I like or not what I have in the glass. That said, It would be silly not to admit that they are useful when getting an idea of what expects you before opening a beer that you don't know.

Stout is one of the most widespread and favourite styles the world over, partly thanks to the popularity of Guinness. Stouts are brewed from Argentina, to Japan (I guess). Of course that there are countries that are more identified with the style and Portugal, Norway and the Czech Rep. are not among them.

Having a stout from each of those countries, I thought it would be fun to do a comparative tasting. Not to evaluate the stoutness of these beers, but to see how similar or different three beers from three completely different countries, all inspired by the same style, can be. 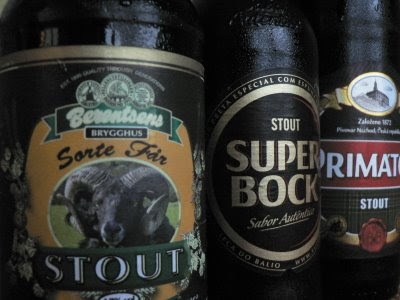 I chose the tasting order with a lot of care. So I started by the shortest bottle, Sorte Får Stout (Black Sheep Stout), from Norway. It was brought to me by my friend Gunnar, the same whom I'm still thanking for that beautiful Nøgne Ø God Jul. This beer is brewed on the occasion of the World Sheep Shearing Championships held last year in Bierkreim, which makes it kind of fun. Gunnar actually gave me two bottles, the first one I drank a couple of months ago, but didn't take notes, nor paid too much attention to it, I just opened it for the sake of drinking something different one afternoon, knowing that I had another bottle left. This sheep isn't really black, but it is very dark, topped by a scarce head that dies pretty quickly. The nose is mostly a mix of fruit, chocolate and some coffee. With 4,7%ABV, it is a bit on the thin side, at the beginning I felt roasted nuts and cocoa, followed by coffee finishing in a pleasant fruity acidity. Tastier than I remembered it. Very nice and very drinkable. Could it pair well with lamb? 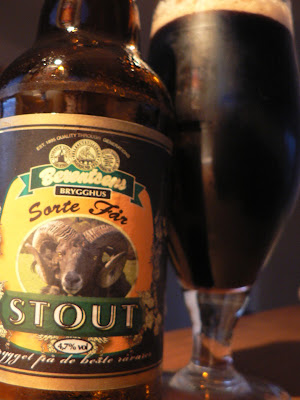 Second was Super Bock Stout (5%ABV), donated by Nuno, a Portuguese living in Prague. Super Bock is the most popular beer brand in Portugal and seeing the selection that Nuno brought me, they seem to have a very interesting product line, at least on paper; but I will speak of them in due time, let's see what the Stout is about. It pours not as dark as the previous one, and has a generous kind of soapy looking head. The bouquet is rather scarce, which isn't such a bad thing considering the sugary acidity that I was able to pick. When drinking it is, well, how to put it in a diplomatic way, AWFUL! Artifical taste, like a fourth rate dark lager with too much sugar. I wasn't able to finish the glass. Things started to explain themselves after I read the list of ingredients on the back label: water, malt, sugar, E105C colouring agent, hops. Yes, it seems this beer has more colorant than hops. I'm a bit of a style anarchist, but this beer is an insult. Super Bock never tried to brew a Stout, they took (im pretty sure) one of their Eurolagers, added some sugar, colourant, some pretentions and a lot of marketing and started selling it to the innocents as something new and different. 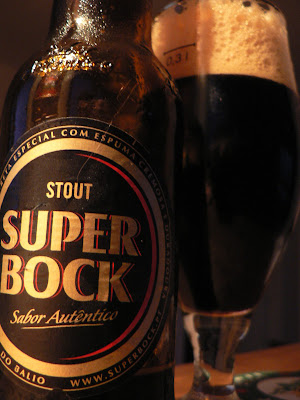 Third was Primátor Stout, already one of my favourite Czech beers, I like it more and more every day. The experience with the previous swill was so traumatic that I almost forget about the beer from Náchod. Its roasted, smoked, fruit, coffee and chocolate notes brought the joy back. If Pivovar Náchod, a municipally owned brewery in the conservative Czech beer market, can make such a good beer, why can't then Super Bock? Well, with 45% of the Portuguese beer market, they don't need to. As several other breweries leaders in their respective markets have done, they brew "style beers" to get on a growing trend and take sales away from those who really want to offer something new. 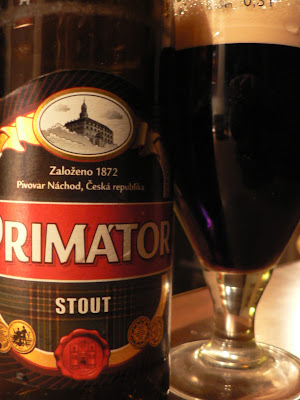 Regardless of the style written on their labels, it is clear that both Primátor and Sorte Får (Super Bock doesn't count) are beers that belong to the same family. They are different, yes, but like Spanish and French, they have a common origin.