By Pivní Filosof February 14, 2008
Ah! Those first months living in Prague! The madness! How many drunken evenings with friends. Now they are part of a foggy, yet pleasant past. When I remember them I can't help but smile. I don't miss them, though. Actually, I don't know how I managed to survive them.

One of our favourite spots back then was U Sadu. Located in a quiet square, right around the corner from Žižkov's TV tower and very popular among locals. Once my life settled down a bit I stopped going. Not because of any bad experience. It just turned out that way.

One day I decided to go back. Historically U Sadu was a hospoda where Gambrinus and Pilsner Urquell were absolute monarchs. At some point things changed, and if it hand't been for "The Good Beer Guide - Prague and The Czech Rep.", I might have never known about it. The hospoda was now a tankovná where Gambrinus and Pilsner are still the stars, but now there is a new friend. Primátor Weizen, the very good wheat beer from Pivovar Náchod, sold at 30CZK for a pint. They have also added both Master to the offer (30CZK/Amber 13°, 35CZK/Dark 18°). This makes a total of five beers on tap, which is in itself quite nice. 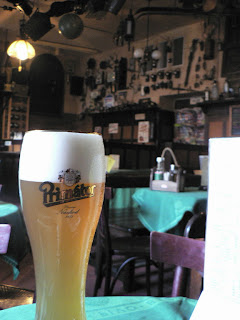 Fortunately the atmosphere of the place has not changed at all during these years. The same decoration with touches of dementia. Hanging from the ceiling and walls, covering almost every bit of available space are all sorts of junk, and I really mean all sorts, from agricultural tools to gas masks of different kinds. At first things can seem utterly chaotic, but there is some sort of order in it. Even when going there alone I don't get bored, there is so much to look at. 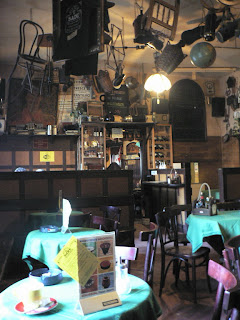 During the warm months they put tables out on the pavement. It is very nice to go for lunch then since there is almost no traffic on the square. The problem is that it might make you want to stay, so it is better to go with time.

They also organise "culinary events", in which menus are put together following some sort of concept like Vepřové hody (pork feast). Never been to one there, but at other places, they are sometimes fun.

The service is also what it was back in my crazy days. Informal and, at times, a bit unpredictable, which in way is part of the atmosphere of the place.

The opening hours are very much out of the ordinary. 8AM - 4AM Mon-Fri and from 9AM at weekends. Let's say they just close to clean up a bit.

I'm really glad to have rediscovered U Sadu. It is one of those hospody ideal to go pivoing with friends while having a good time and good solid pub food. And it's not too shabby to go for a quiet beer in the afternoon either, or even to do some work, since there is a free Wi-Fi connection. Actually, there are very few reasons not to go to U Sadu 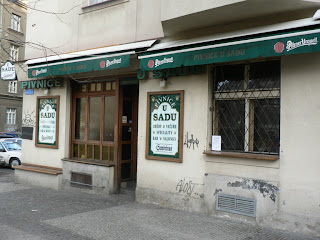