The thunder on the shelf

By Pivní Filosof February 23, 2008
Thus is the English translation to Hrom do Police, a hospoda lost in the streets of Vinohrady, a residential quarter of Prague full of restaurants, cafés and hospody for all tastes and budgets. There is also very interesting architecture from the end of the 19th century and beginning of the 20th. A very nice place to wander around tree lined streets and escape the crowds in the centre.

It was on one of those wanderings that I came across this place, well, actually, I came across a sign announcing it. What made me change my route was the logo of a brewery.
Měšťanský pivovar v Poličce, Polička for friends, is an almost unknown brewery in Prague. Which is a great shame. Fortunately the brewery is the owner of this hospoda, so you can find there all their line.

When getting to the corner of Moravská and Chodská, you can see the sign with the logo of brewery. The first impulse is to walk right to the door directly below, which would be acutally a mistake, since it belongs to some kind of herbal shop. To find the restaurant it is necessary to walk a few more meters down Chodská. 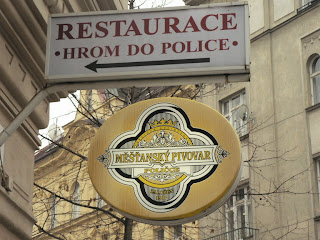 Minding your heads, you walk into a gloomy room. You might feel as if you have travelled back in time, to sometime in the 80's. The music adds to the atmosphere. The dial seems to be stuck on one of the many radios that play exclusively pop hits from the second half of the 80's and first of the 90's. Very popular among thirty something Czechs, it seems to remind them of those heady days right after the Velvet Revolution of 1989. Not my cup of tea when it comes to music, and made worse by the fact that these radios seem to have a compilation of hits from the period and they simply play it random over and over again.

When reading the menu you might start feeling that you are in some sort of bizarre theme restaurant. Which is enhanced by the food. I've been there many times and the best the food got was to decent. Sometimes, plain bad.

Fortunately the service does not follow the general style. It is pleasant, efficient but relaxed and, on occasions, sincerely friendly.

What I go there for, though, is the beer. And very good beers they have there. Polička is not the most innovative of breweries, but what they make, they make very well. It is particularly interesting to be able to compare the normal Otakar 11° (4.2%ABV) and Záviš 12° (5.0%ABV) with their kvasnicové versions and see how different they are. 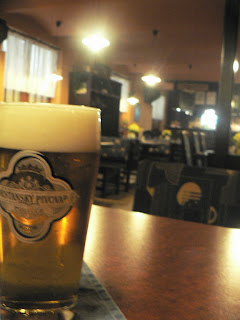 Normal Otakar looks like a typical Czech golden lager. The nose is fruity and mild minty notes in the back. Fruit is what predominates when drinking it, but now joined by some hints of vanilla. The finish is short and very herbal. Its kvasnicové version has a cloudy golden colour with a nose of sweet green apples. The flavours are more bitter and herbal with the fruit now appearing in the finish.

Normal Záviš looks basically the same as its little sister. Apples, pineapple and some citrus notes can be felt in the nose, all of them mild, but with character. In the mouth is herbal and dry, very refreshing and with very few sweet notes. Kvasnicové, on the other hand has a nose with very interestingly balanced herbs, fruit and spice. It is still herbal to the taste but a less dry. The lovely finish is bitter but at the same time has vanilla notes. Delicious. 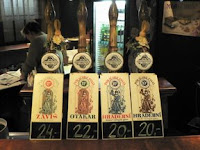 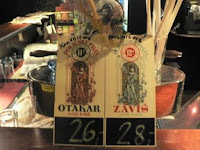 Except for the kvasnicová, all beers are available bottled to take home and keep on enjoying.

Such is the power of good beer. Will make me go back to this place of mediocre food, tacky music and weird atmosphere. There should be more like it. 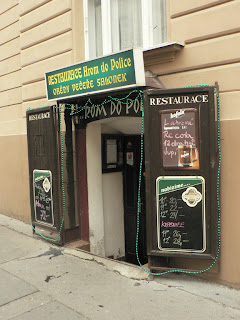