By Pivní Filosof February 07, 2008
The other day I was finally able to make my more than delayed second visit to Pivovar Berounský Medvěd. I had been there in May last year and liked the place a lot. I had planned to go back several times, but for different reasons, I had to cancel the trips. The other day things turned out in such way, that I had no other option than to make my way there.

So I went to Hlavní Nadraží and took the fast train leaving at 11:16AM. A bit more than half an hour later, I was in Beroun. I walked out of the station and turned left, my good mood started to improve when I saw the sign leading to the brewery as I was getting close to the bridge. Like the fist time I went, I couldn't help but smile when I walked under the bridge and got close to the entrance of the place where Berounský Medvěd is. Walking into a salvage yard to have a beer must be one of the most bizarre things one can imagine. But there it is, among twisted pieces of metal, old tanks and car parts, the only building that does not look like the stage of a horror film. 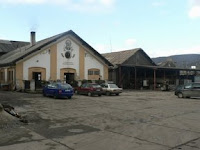 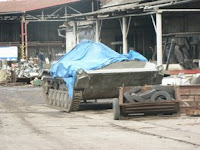 Walking through its door is like walking into another world. Dim light, the cieling supported by thick dark wood beams and columns that look as old as the world, the colourful tiles on the floor that look just as old and the walls decorated with frescoes, old beer ads and even a massive wood carving. 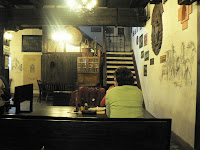 Walking slowly, soaking up the atmosphere, I went to one of the tables in the back of the room. The cute waitress came quickly with the menu and asked me what I wanted to drink. I ordered a 11° světlé, and then the lunch daily special,vegetable cream soup and roasted mutton in garlic with spinach and potato knedlíky. The soup was fine, though not memorable. The mutton was really nice, tasty and tender, I also liked the spinach and the knedlíky, though these could have used a bit more salt. Anyway, as value for money goes, at 65CZK for the special, nobody can complain. 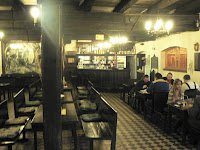 Between the soup and main course the golden lager went down quickly and was followed by a tmavé 13°. This dark beer didn't impress me much. It is very good looking, very very dark and very very cloudy, with a creamy slightly tanned head. I could feel some cocoa and fruit on the nose. When drinking it, however, it is a bit boring, the cocoa flavour is not strong enough and the fruit is there in the back, like shy. With more intense flavours, this could be a wonderful beer, unfortunately, it is only potential. 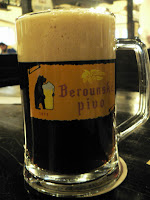 Now, the golden lager is delicious. Deep golden colour and very cloudy. I could feel tropical fruit and yeast with subtle mint notes in the back. It's got a silky almost creamy body, fruit is what predominates and the finish is short but dry and intense. A brilliant beer, I had to order another pint. 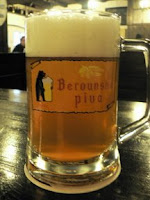 But the best of the day was not going to such a cool place to have good food and great beer. When I left the restaurant I stopped to take some photos of the outside. While I was shooting a tank I heard a female voice greeting me. My first thought was that I had got in trouble because it wasn't allowed to make photos there. Very far from the truth. As it turned out, the voice was that of Ms. Hana Mayerová, one of the owners of the brewery, who was really happy when I told her that the pictures would be in this post.

She was very nice and invited me to her office, where she gave me her card and some brochures while she told me a bit about the history of the place. When we walked out I asked her if I could have a look at the várna, the brewery proper. She took me there and introduced me to the brew master. A very friendly young man who very enthusiastically showed me around, telling me about every step of the brewing process, and even allowing me to peep into one of the kettles. What surprised me the most was that the wort is cooked using wood, being this one of the only two breweries in the Czech Rep. that still use this method (the other is Dětenice). I don't think this has much of an effect on the finished product, but makes this brewery something a bit more artisan like. As farewell, he gave me a PET bottle freshly filled with the 11° right from the lagering cellar. I got to the station right on time to take the train back to Prague with an ear to ear smile that would last me for the rest of the day. 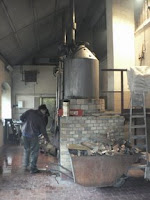 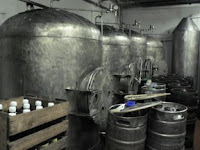 The nicest thing about this bottled beer was that, though on paper was exactly the same I had drunk and loved with lunch, when I opened it to drink with dinner was quite different. The fruit was still there, but the finish had now more spicy notes, which made it more interesting.

For those visiting Prague and also for those living here, going to Pivovar Berounský Medvěd is a great alternative for a day trip. It can be easily combined with a visit to Karlštejn, since one of the trains that go to Beroun has a stop there; or it can also be part of a lovely bicycle ride by the Berounka river. On Both cases, the trip is lovely and really worth it, more so if it can be capped with some really good beer.