Making the best of an invitation

By Pivní Filosof February 04, 2010
Though I talk about places that I visit while wandering around the city, restaurant reviewing is nor my area of expertise, neither the main topic of this blog. That's why I was quite surprised by the mail received from Restaurace Paprika a few days before Christmas.

Paprika is a small Hungarian restaurant located in a back street of Holešovice. Its owner Holešovice wanted to invite me to taste the home made sausages his brother, the chef, makes. I love sausages, they are one of the best beer snacks in the world, and I have a greasy spot for Hungarian-like sausages. Of course I accepted the invitation. In my religion refusing without a very good reason an invitation to good food is a capital sin punished by an eternity of drinking piss-warm Corona from glasses of Kout na Šumavě.

So a couple of weeks ago I agreed with Lászlo to pay him a visit on a quiet afternoon. I didn't go empty handed, I took a few beers with me to try some pairings and share with my host. 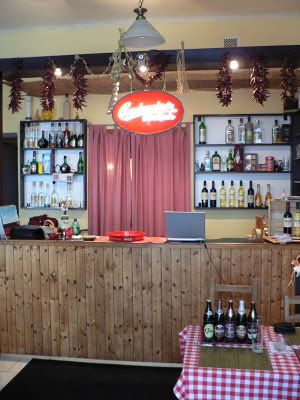 Paprika is a pretty small restaurant, but very welcoming, a real neighbourhood place. The decoration and the furnishings are basic and unpretentious, I quite liked it. I was welcomed by László. He's a very nice and friendly bloke, from Hungary, but has been living in Prague for many years. He told me the restaurant had opened in March and that fortunately, things were beginning to go very well. Still, he said they would like to move to a nicer location, with more pedestrian traffic. He also explained their philosophy of using only fresh ingredients, as authentic as possible, what they can't get here, they bring from their home-town. The aim is to cook really home made typical Hungarian food.

To get things started he brought me three pieces of bread topped with different lard based spreads, kacsazsír, with duck lard; tepertőkrém, with pork drippings and kolbászzsír tarjadarabokkal with sausage drippings with bits of roasted pork neck. All three absolutely delicious. The perfect beer snack. I paired the first two with Svijanský Rytíř, the bitterness of this světlý ležák cut through the fattiness and brought up the flavours of the spreads. I tried the other with Primátor 13%, not bad, but I liked the match with Svijany better. 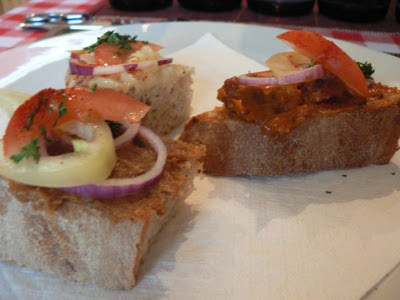 The "main course" (or so I thought at the moment) came next, the promised home made sausage. László told me that they mince the season the meat themselves and then stuff it in tripes brought from Hungary. It was wonderful! Perhaps the best sausage I've ever had in a restaurant. Incredibly meaty, with the right amount of spice that gained intensity as the sausage lost length. I wasn't a big fan of the tripe, very thin and soft, I prefer them snappier, but László told me that it is the kind used for this type of sausage. I paired it both with Primátor 13% and with Herold Tmavé. The latter worked better. Its roasted notes complemented the spice very well. The sausage also came with a plate of mixed pickles, I loved the cabbage, which also went well with the Herold. 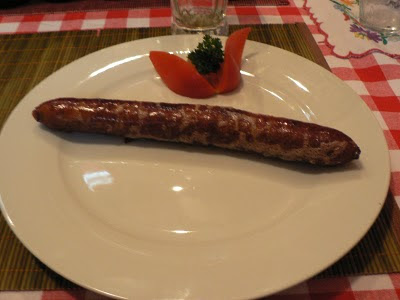 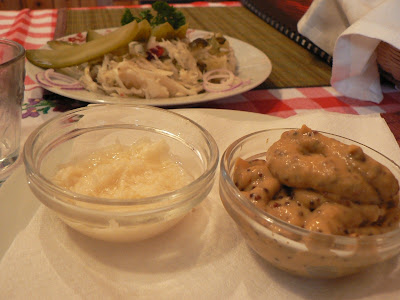 After that I was brought another round of spreads on (now bigger) pieces of bread and we chatted a bit more about Hungarian food and culinary traditions and, specially, about Goulash and how they prepare it. I got a couple of good tips to improve my already wicked gulášek. After I was done with the spreads (man, they are lovely!) I went to the loo, when I came back I had a surprise waiting for me on the table. A generous portion of the dish we had been discussing. 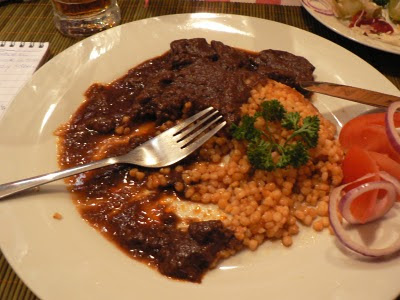 The real name is vörösboros marhalábszárpörkölt. It came with something that looked like cus-cus called tarhonya. Though a bit too salty for my taste, it was still very, very good. Wonderfully rich and tasty, with very tender mean that was neither stringy nor dry. Fantastic. Here, Primátor 13% did a very good job. Its caramel notes made a nice base for the tasty flavours of this goulash.

I ended up stuffed and with a very jolly belly, also very satisfied with my pairing experiments. I promised László I would visit his restaurant with my family once the weather got a bit nicer. The offer of draught beer is nothing to write home about, Pilsner Urquell and Kozel (I'm trying to see if László wants to change suppliers), but they have the pretty good Maisel Weisse, from Germany at 37CZK a bottle. Of course, there's also a nice selection of Hungarian wines.

I strongly recommend Restaurace Paprika. Not only they serve good home-made food, but the owners are honest, hard-working people who are everything they can to offer the best possible quality to their clients, and that deserves support. 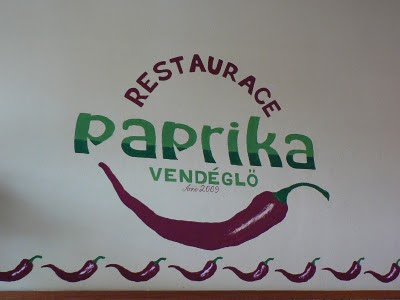