By Pivní Filosof February 19, 2010
American "Craft Beers" enjoy a massive reputation and many of them have served as templates for many a micro brewer from around the world.

Naturally, like any beer enthusiast worth his salt, I really wanted to drink at least some of them, but I had pretty much come to terms with the idea that there was nobody here willing to import them. I tried to see if there was anything I could do on my own, but my finances thought otherwise. Fortunately, I found a kindred spirit in Hanz, the owner of Zlý Časy, who'd been doing quite well with specialties from Germany and beyond and wanted to expand the offer with stuff that nobody had ever offered in Prague, at least not on a regular basis. So we started working together. I helped him find suppliers and choose which beers to bring, solely based on their reputation and what I wanted to drink myself.

Two weeks ago he got his ass to Amsterdam to pick those beers that we had chosen together with the help of a couple more štamgasty of the beer temple in Nusle. When he came back he gave me a few samples as a token of gratitude, and also so I could review them here.

It was so nice to finally have the chance to drink some of those beers that I had heard so much about! And what better way to start this beer walkabout than with perhaps the most iconic of the lot, Sierra Nevada Pale Ale. 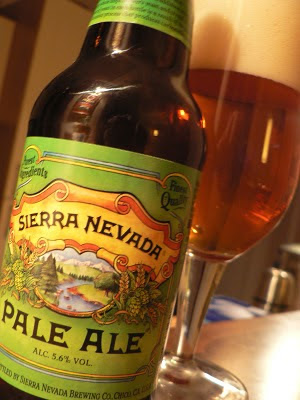 Sierra Nevada Pale Ale pours a nice rich amber, topped with a very long lasting head. The nose has notes of citrus and pine on a bed of almost summery fruit. To the palate is a wonder of balance between the hops and the malts, all wrapped in a most silky body. I won't go as far as to say that at this stage in my life it was an epiphanic bee, but it could easily be for someone who's just wetting their feet in the craft beer oceans. To me, though, it can be a wonderful "every day" beer, the kind you are able to drink while doing something else without claiming too much of my attention, while at the same time gratifying if sipped slowly on a weekend afternoon.

Pumping up the ABV volume, this beer adventure took me to the two samples from Flying Dog, Snake Dog and Double Dog. 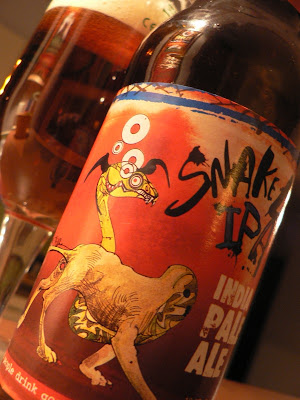 I opened the lighter first, the IPA with 7.1%ABV, Snake Dog, another outstanding beer. Intense bouquet of "juicy" tropical fruit in a bowl with mild syrup, finishing in orange peel. So far, Haandbryggeriet's Dobbel Dose had been my favourite IPA ever. I wish I could compare these two side by side, but it's very likely that in Snake Dog, we have a new winner. Wonderful beer! The hops threaten to go out of control, wrecking havoc, but they are fortunately kept on a tight leash by the almost muscular malts, which bring them closer, and closer until both mix and then slowly fade to give way to some mild, yet persistent, grapefruit notes. Delicious! 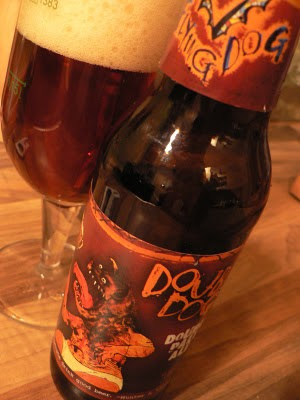 That evening, after dinner, I turned the volume all the way up to 11.5 with Double Dog and its not to be taken lightly 85 IBU. Another beauty. A heavy dry hopping that carries the rhythm almost like a madman and doesn't let down for the whole sip, and way after you've finished it, too. This is not a beer for beginners. Unctuous mouth feel, syrupy, with tonnes of grapefruit peel. I would describe it as a three layered beer, very cytrusy hops, very fruity malts and burnt wood. There are moments when it challenges you "session" it, but it will not allow you, it demands you drink it slowly and enjoy every drop. Fantastic. 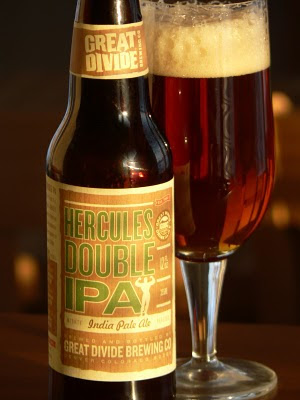 The following day I opened Hercules Double IPA from Great Divide Brewing Co.. For me, the least known of all, but strongly recommended by Hanz. And man, was he right! Dark amber, with a nose that reminds of vanilla, tropical fruit and caramel. One of the remarkable things about it is that despite also having 85IBU, but "only" 9.1%, compared to the 11.5% of Double Dog, Hercules is a less bitter beer. Here the choreography is dictated by the malts, with notes of nuts in caramel. The bitterness is there and loud, but in the background, doing what the malts do in other IPA's I've had, bringing balance, and it doesn't take centre stage until the finish. Very, very tasty beer.

I ended my exploration with the most legendary brewery of all, Anchor Brewing Co., and their Barley Wine, Old Foghorn. 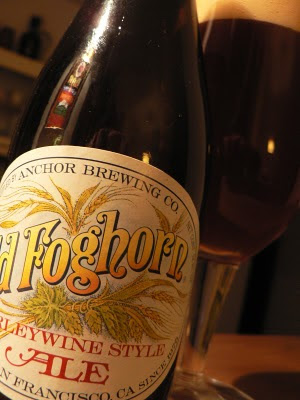 Had I drunk a Barley Wine before? I doubted it, though X-33 has some of the stuff I've seen mentioned when describing some beers of this style, even though it's a lager. And there really are some loose similarities between both these beers. Old Foghorn pours a very dark amber and its nose reminds of flowers, home made marmalade and sponge cake. The taste has a lot of dried fruit, mildly sprinkled with molasses. The bitterness, though not very intense, is persistent and brings apart each of the individual flavours and aromas without letting the beer loose its balance. The 9.4% ABV is very well integrated, you can feel it, it prickles the tip of the tongue and gives a bit of a warming feeling. At times it reminded me a bit of the Greek brandy Metaxa, which I like a lot. Delicious beer to cap an evening while listening to some good and relaxing music, R&B from Dr John, perhaps.

I liked them, I really liked them all. I loved how different they are and how interesting they are as drinks. I'm really happy someone has finally decided to import them.

And just in case any of you is wondering. No, I don't make any money out of these beers, neither from their sale, nor from advertising. I do have an interest in them selling well, but it's not financial, the reasons are others. A: They are really good beers and they improve our beer culture. B: I want Hanz to keep on importing them (he's planning an American Beer festival for Autumn), so I can go and buy these and others any time fancy one. C: Hanz is a friend and I want him to do well with this initiative.