By Pivní Filosof December 18, 2009
Following my route through the samples the people of St Peter's Brewery sent me, it was time to start getting into the more or less classic stuff.

The three I had in line were Golden Ale, Suffolk Gold y Ruby Red.

Golden Ale is a pretty new style that, according to Martyn Cornell, came out as a kind of response to the rise of lager by the English Real Ale brewers. I had only tried one Golden Ale thus far, Oppigårds Bryggeri's, from Sweden, which I had found pretty pleasant. 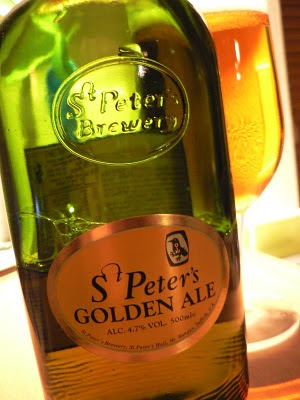 St Peter's Golden Ale is similar to its Swedish counterpart in many aspects. It reminded me to a good světlý ležák in looks, aroma, mouth feel and, to a lesser extent, maltiness. Its most distinctive note is given by the hops, that provide a marked, but controlled bitterness that gets stronger in the finish, long and bitter. With 4,7%ABV and very low carbonation, it's extremely easy to drink. Very pleasant, it leaves you wanting another one (and a few more to follow). 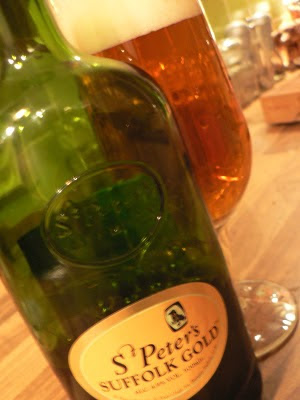 Suffolk Gold isn't another Golden Ale as I first thought, and as the name suggested. It's actually a Bitter Ale brewed with locally sourced ingredients (St Peter's Brewery is in the County of Suffolk). It's marginally stronger than Golden Ale, with 4.9%ABV and a shade darker. It's also maltier and fruitier, with a tad of a fuller body. The hops, Suffolk Gold, also have a strong presence, but provide a more moderate bitterness that blends more seamlessly in the maltiness. Another very good beer, very easy and pleasant to drink that also leaves you wishing you had another bottle at hand. 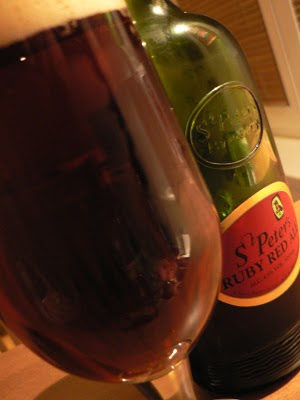 Closing this session I opened Ruby Red, which pours an expected reddish. It's got a nose full of fruit, spiced with a subtle touch of caramel and some burnt herbs. It also packs quite some flavour despite only having 4.3%ABV. There's a nice mix of burnt sugar, fruit and herbs with a mildly spicy touch. While I was tasting it my mind filled with images of barbecues and garden parties (summer nostalgia perhaps, even though I love winter). The thing is Ruby Red is just the perfect beer to wash down some grilled meats.

Come to think of it, each of these three ales are great pairings for stuff cooked on a charcoal or coal fired grill, and while I'm typing this I realise that they are the kind of beers I was thinking of when I asked this question.

Thus far, I'm very satisfied with St Peter's and his apostles. I'm already looking forward to the third installment, where I will get deep down into some real classics.