Well, what a suprise!

By Pivní Filosof August 31, 2009
Before I get to the point, let me remind you of the products that Primátor put on the market in the last few years:

2003: Weizenbier. One of my favourite beers. To my taste, better than most Bavarian wheat beers I have drunk.

2006: English Pale Ale. Regardless of how "true to style" it might be, it's wonderful that a Czech industrial brewer is making a pretty decent Ale in Lagerland.

2008: Stout. A fantastic beer. Recent winner of Best of the World in the Oatmeal Stout category.

So, as you might imagine, when word on the street was that Primátor was going to announce a new product, many got quite excited and wondered what the "Specialist in Specials" had ready for us.

Well, it turned out to be a simple Jedenáctká, a pale lager brewed at 11 degrees Balling. Nothing special with that, really.

Some "blamed" the new owners, LIF (also owners of Svijany and Rohozec), for this change in philosphy. The brewery says that the new product is based on the recipe of the first beer brewed when the brewery was established, back in 1871.

I see it as one of those incredibly talented actors who every now and then takes a role in a silly Hollywood blockbuster, in order to be able to finance projects that are closer to his/her heart.

Needless to say, I really wanted to taste this beer. After all, Hollywood blockbusters might not be very deep, but can be fun sometimes. I didn't want to taste it alone, though. I wanted to compare it with the other two jedenáctký that have showed up recently, Gambrinus Excelent and Pardál Echt (Pardál is another brand of Budějovický Budvar).

That's right. In less than a year, two of the biggest brewers in the Czech Rep. presented a 11° Balling pale lager. Many have wondered why.

The reason is not the financial crisis, as The Prague Post reported some time ago. If people really wanted to save money on beer without sacrificing too much flavour, then regional brews would have a much bigger market share as they are invariably cheaper (and usually more flavourful).

This category, or style if you want, is nothing new. The first pale lagers had that gravity, actually. If we look at the more recent history, Zlatopramen have had some success with their "11", and so have Krušovice with their Mušketýr. And even the group Plzeňský Prazdroj, also owners of Gambrinus, have been selling a jedenáctká for a few years, Kozel Medium. And actually, both of the best known Czech beers are jedenáctký, but that's not something they want many people to know.

To me, the reason is the slow but constant growth of the regional breweries. If you ask them, many will tell you that the 11° Balling pale lager is their best selling product.

I've also read that one of the reasons behind Excelent is that Gambrinus wanted to revitalise the brand. Is Echt a response to Exclent? Could be, after all, the Pardál brand was created as a direct competitor to Gambrinus. On the other hand, I had already heard that Budvar had a new product in the pipline last year.

But all this is irrelevant, really. As I always say, the most important thing is what you have in the glass, so the best we can do is to let the beers do the talking.

I don't have much love for either Gambrinus or Pardál, and I do have a soft spot for Primátor. Since I wanted to be as impratial as possible, I decided to do a blind tasting. I got the help of my beloved wife, who welcomed the chance of doing something else than feeding the baby, and armed with a slice of bread, my notepad and my well honed senses I sat to taste. 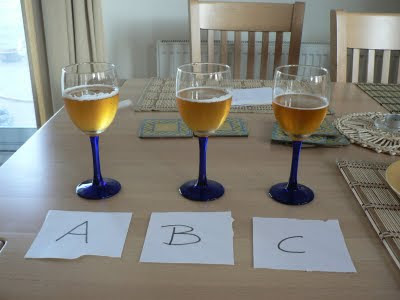 Looks:
All three samples look exactly the same. Not much of a head in these glasses, but later, when we were finishing the bottles, they all had a nice, compact, lasting head.

Aroma:
Sample A: Caramel background, dry herbs, a touch of mint. Later a some ripe fruit shows up to make it more interesting.
Sample B: Mild, some caramel, resin. Not very well put together.
Sample C: WOW! Fresh hops, summer, grass, flowers. Mild caramel in the back to give it balance. Lovely. 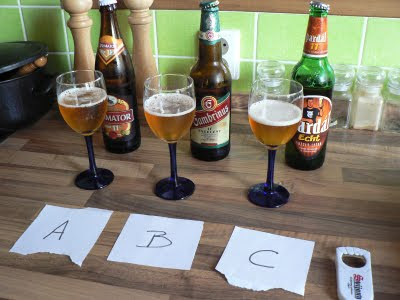 Gambrinus Excelent was the only one I had already drunk, and I was able to recongnise it as Sample B. It's not bad, considering where it comes from, but it's far behind the other two.

I was really surprised when I was revealed the identities of samples A and C, Primátor 11% and Pardál Echt, respectively. I'd never liked the original Pardál the few times that I'd drunk it, so I wasn't expecting much from this one, and that's why I had tipped Primátor as Sample C, it was the one I had liked best, so it had to be it. I was wrong.

Perhaps, someone who doesn't like much hop profile in their beers would like Primátor 11% better. But even if you are one of them, you have to love Echt's wonderful bouquet, and that's why Pardál Echt is the winner. 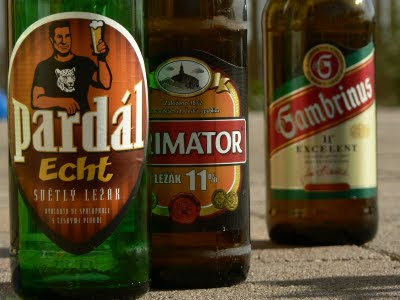 I guess I will have to give Pardál Výčpení another chance.