Much room for improvement

By Pivní Filosof August 25, 2009
Although Barcelona and its surroudings are leading the Spanish craft beer movement, the rest of the country doesn't seem to want to be left behind. Many microbreweries have opened recently and, slowly, they are getting the attention of consumers.

I received four samples from two micros from Asturias (thanks Raquel!), about which I had absolutely no references. That's great!

The first two that fell in the line of duty came from Cervecería La Xana (couldn't find a webpage). The samples were Toastada and Negra, both Ales, both with 6.2%ABV. 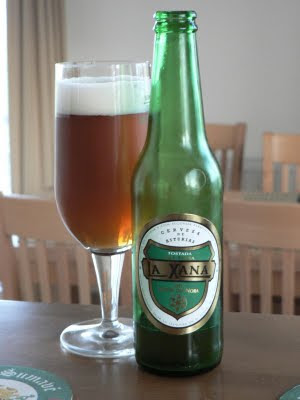 How I would love to speak extensively about this beers! You know, write those poetic tasting notes all of you have come to love. Unfortunately, that won't be possible. Both beers were off. 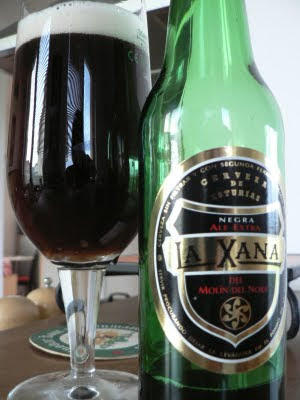 I know how much Asturians like their cider, I believe it's their national drink. But I don't think they love it so much as to flavour beer with apple wine, because that was the way both beers tasted. The difference was that Tostada tasted as if someone had added a dollop of caramel in a glass of cider, and Negra (actually, only a bit darker than the other one), tasted as if someone had added too much cheap sugar to that same glass. Unlike those beers from El Boslón that had the same problem, these ones were well within their sell by date.

I know that that cider taste comes from some infection, but I can't remember which and can't be arsed with looking for it, so if someone will be kind enough to refresh my memory, I'll be really grateful.

Before getting into the other two samples, L'esbardu and Belenos, let me propose the following hypothesis:

Imagine you are at a beer shop and fancy buying something new. There is a lot to choose from, so you start picking up bottles to see what sort of information the brewers have chosen to give share about their product. The basic stuff, at least. Who brews it, a list of ingredients (doesn't need to be too comprehensive), what sort of beer it is (Ale or Lager at the very least), ABV %. Something like an OG, or similar, and serving temperature would be more than welcome as well.

So you take a bottle of L'esbardu because your attention has been caught by the frase in Spanish "Brewed with Somiedo honey". You turn the bottle around and the only info you get is that the beer is brewed with the best pale malts, the finest hops and the aforementioned honey. The ABV is written on the front, in very small letters. Want to know anything else? Good luck.

And you'll be worse off with Belenos. What is it made of? How was it fermented? Who the hell made it? Your guess is as good as mine. The company mentioned in the back, Exclusivas Toma SL is only the distributor, and the webpage doesn't mention the brewer. This lack of information is not label-space related. The back label tells us with flair the origin of the beer's name. As if anyone cared!

So, would you buy any of these beers? I know I wouldn't. Would that be a mistake? Fortunately, both beers were a pesent, so I can find out.

I started with L'esbardu, only because, with 8.4%ABV, it was the weaker one. Pours gold, slightly cloudy (due to the sediments, another thing the bottle fails to mention and should), topped by a loose head. Fine carbonation, a lot of it. Interesting nose. My wife is a big consumer of home made honey and that is what I mostly felt, the sweet flowery smell of good quality home made honey, backed by sweet orange notes and plenty of alcohol. In fact, the alcohol is very poorly integrated. The beer's pretty thin and too fizzy. However, behind all that there is a beer with quite a bit of personality, with plenty of ripe summer fruit and a bit of well balanced yeasty acidity, plus a mild spicy touch to finish it off. Perhaps with a bit of aging L'esbardu could solve the etilic problem, though its thinness makes me doubt it. I guess I'll never find out. 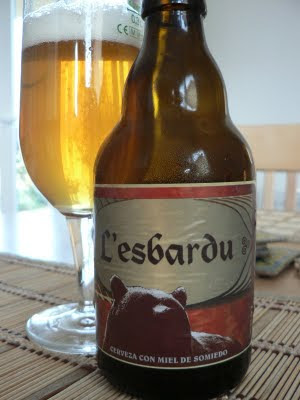 A bit stronger, with 9%ABV, Belenos Súper pours pale and very clear gold, similar to a decent industrial lager (it might as well have been pink, not even the colour is mentioned on the label). What an utter bore! Hardly any aroma, thin watery body (too much atenuation perhaps?), flat without a hint of character. Pfff! Pilsner Urquell tanková packs thrice the flavour with half the ABV! The ony thing it's got going for it are the yeasty notes, which reminded me of an (obvoiusly overrated) strong Belgian Blonde that I didn't like too much. Oh yeah! And the perfectly integrated alcohol. 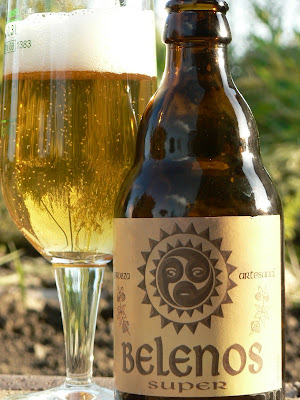 Technically speaking, Belenos is better made: well integrated alcohol, just the right amount of carbonation and no infection as far as I can tell (which is not all that far), but like many other technically flawless things, it's got no soul. With all its shortcomings, I prefer L'esbardu by quite a few streets.

To put it in other terms. Belenos is a young woman with perfect hair and make-up, clothes, shoes and accessories from the best brands and latest fashion trends, an ideal of style and beauty right out of the pages of a fashion magazine, but empty inside. L'esbardu is a bit rough around the edges, could loose a kilo or two and perhaps speaks a bit too loud, but isn't she a lot more fun to hang out with!