By Pivní Filosof April 02, 2009
People that suffer from celiac decease are those who aren't tolerant to gluten. What does that have to do with beer, some of you might be asking. It's that gluten can be found in several cereals: barley, wheat, oats and rye, all used to a more or less extent in beer making, specially barley.

Now you start seeing the relationship with this blog. Almost all Czech beers are brewed with 100% barley malt, there are also those brewed with wheat, oats and rye, meaning that if someone suffering from this ailment fancies a pint they are in trouble.

So far I had seen only one gluten free beer. It showed up briefly at Pivovarský Klub, it had been brewed by Pivovar Zabřeh, near Otrava, and called itself Pohankové Pivo (buckwheat beer). It wasn't well received. It was a very cloudy beer, hay coloured and with a taste that was too sour for the averaga Czech. It hasn't been seen again, and I don't know if it's still brewed.

But there are some gluten free beers in Germany, and one of them got to my hands. Neumarkter Lammsbräu - Glutenfrei. The person who gave it to me confessed that he'd never tasted it, but that he'd been told that it was something completely different to any other beer I'd tasted so far. Which is a lot to say.

This 4.7%ABV beer looks just like your average mass produced pils. Things start getting different in the nose, there is some raw grain, similar to what you can feel in a nealko, but with some more fruit. The taste again is similar to a nealko, Budvar in this case. It's dry, with a sugary undertone and leaves a not very identifiable aftertaste, the closest I got to pin it down was resin. I wasn't too keen on it at first, but as I emptied the glass it slowly won me over. If you asked me if I would go out and look for it, I would anser that no, I wouldn't, but I wouldn't turn it down if offered, and it is nice to know that those who can't tolerate gluten have a quality product available. 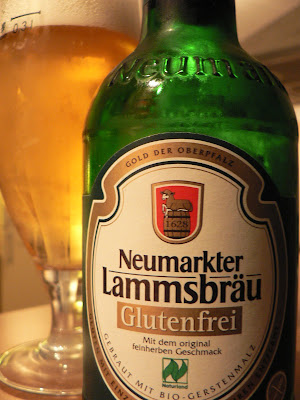 In Prague, I've seen at some specialists shops and at Pivovarský Klub. And if anyone is interested in selling it or buying at least a case, you can contact the importer, Pivoňka from Hradec Králové.

There is one thing, though, that caught my attention. It's unrelated to the quality of the product, but still curious. My German is almost 0, but I know the word "bier" all too well, and I wasn't able to find it anywhere on the bottle. The label on the back identfies the product as Alkoholaltiges Getränk (alcoholic drink). On the same label, the brewer tells us that this drink is made with spring water, malt from organically grown barley and organically grown hops. Is it possible that the bollocks from the Reinheitsgebot have reached such extreme of silliness? I've got now idea about the process by which the gluten is extracted from the barley or malt, but shouldn't the resulting product be considered as "pure" as water that has been chemically altered before the mashing?

If anyone knows the answer, it'll be more than welcome.