By Pivní Filosof March 04, 2009
Last weekend I was finally able to try to brew my first beer. The result, unfortunately, was not good. The positivething is that I know what I did wrong, or at least so I believe.

But I still wanted to share with you the experience that, though not successful, was still interesting and quite some fun.

I had read quite a bit, consulted with friends from several countries who gave me many useful tips. I had planned everything carefully and had all the ingredients ready, which had been donated by friends (thanks Honza and Laďa). The equipment was a bit improvised, but since I was only going to brew 5l, I didn't think necessary to buy anything too big. 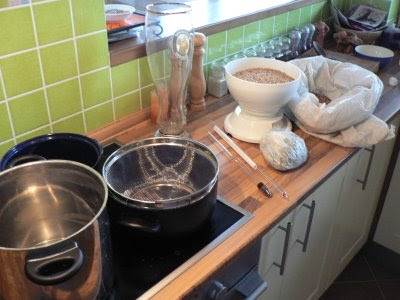 I like cooking very much, but I'm not the kind of person that follows recipes. Most of what I cook are my own recipes, many of them improvised pretty much on the spot. The few times I do go to a recipe book I do it mostly to get an idea of cooking times and methods, adapting the ingredients to what I have at hand or I find during the shopping. I had the same approach for the beer.

The recipe I came out with was 50% Munich malt, 30% Caramel and 20% wheat and 30g of Saaz hops pelets. I started around noon. I put the grain, about 1,2kg, in a vegetable strainer that could also be used for steaming, and put that in a pot with 3,5l of warm water. I had another 3l warming up in a similar pot.

As recommended by U Medvídku's brewmaster, I went for a three step mashing. Resting for 15mins at 50°C, then 20 minutes at 60° and finally another 20 minutes at 70°. Controlling the temperature was a lot easier than I thought it would be. I picked one of the bar stools, sat in front of the cooker and had some beer while I kept a an eye on the thermometre. My wife, who was a bit afraid the process will stink the whole house, was actually surprised by how well the infusion smelled. 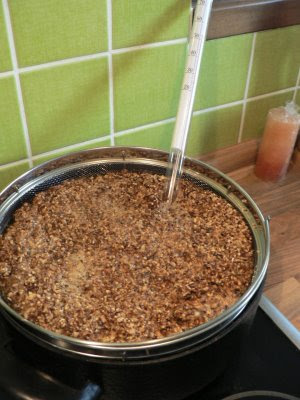 With the mashing finished I took the colander out of and put it on top of the spagetti pot I was going to use for the boiling. I slowly added the water that had been warming on the side, I wanted it to take as much of the sugars as possible, and I repeated the procedure with the very dark "tea" that I had in my "mashing tun". 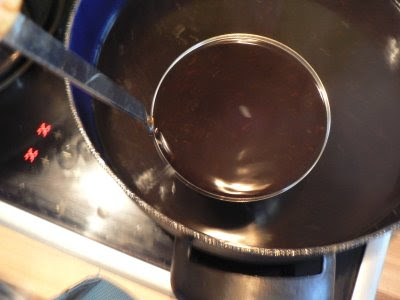 Once the boiling started I begun with the hopping: 25% at the beginning, 40% at 30 minutes and the rest by the end. 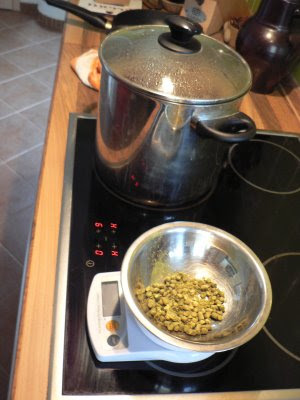 Now it was the most delicate part of the whole thing. The cooling. The day was quite chilly. I had filled a tab with cold water and left it on the balcony during the boiling. I had been told that I shouldn't worry about contamination because the micro-organisms that cause that are not active in cold weather. I took the pot to the balcony and, carefully, dipped it into the water. The temperature went down much faster than I had expected, which made me happy.

I had to improvise when it came to take the density. The evening before I realised that my saccharometer was way too long. While I was thinking what measures to take I remembered that the 2l ornamental glass from Franziskaner I have in my office (I knew someday it was going to do something else than gather dust). I sterilised it with boiling water and worked very well. I looked that the beer wouldn't be very strong, I only measured 8.5% in the scale, but I didn't mind really. 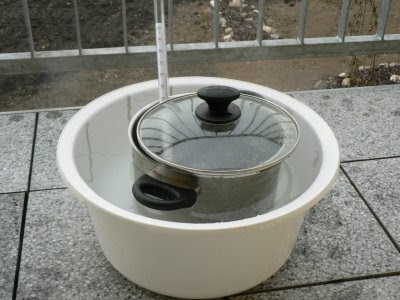 Somewhere around here is when I think I made the mistake. The day before I had been given the yeasts (ale ones) in glass jar with water, which I put in the fridge once I got back home. I had been told that I had to take what I would need out and let them reach room temperature, and I forgot to do that. Neither did I take the hops that were floating about in the wort. Was that also a mistake?

So now I have a plastic box with a very aromatic brown liquid that has not given any sing of life. The yeasts are all in the bottom, I tried adding some more, without any results. It is not easy to accept the fact that I will have to throw the whole lot down the toilet, but I don't think I have any other alternative, or do I?

I will have another go. I will ask the right questions to the right people to see what I that I have to do differently. Needless to say, I'll be more than happy to get your bits of wisdom. I wouldn't be at all surprised if the mistakes were more than one.