By Pivní Filosof March 10, 2009
The Scottish brewer BrewDog has in its still short history acheived an important reputation. Partly thanks to their very intelligent marketing, which unlike many other breweries, is supported by quality products.

My first experience with their beers was with Punk IPA, which I liked, but didn't blow my mind as the label so seemed to promise. In short words, good beer, should shut up a bit.

Not counting the prototypes, because they were that, prototypes, the other BrewDog beers I had afterwards were good, very good, culminating in the brilliant Paradox Smokehead.

I was already thinking that after Paradox, BrewDog would not be able to top themselves. Then I opened a bottle of BrewDog Tokio.

I had bought it at the Vanoční Pivní Festival last December. It was the last of the beers I had brought home from the event. I wasn't actually thinking of drinking it the day I did. It was Monday evening, my wife was out. I was drinking Schneider Weisse (fine, but I like Primátor Weizenbier better) and čabajka, while, via Facebook, I tortured my Argentine fellow beer lovers, who, due to the time difference, were still at work.

In a clear gesture of solidarity, I decided to pop open the bottle of Tokio to share it, virtually, with them. What a great decision! 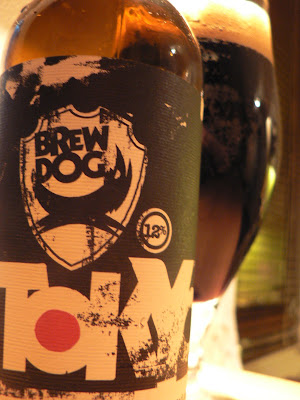 This Imperial Stout brewed with cranberries and jasmin is darker than the future. It absorbs light. Not much of a head to speak of, expected in a beer with 12%ABV. The nose reminded me a bit of x33, perhaps a bit drier. Very little to do with other Stouts, imperial or commoner, that I'd had so far. The first sip fills your mouth and slaps it around with love. It is incredibly complex. Once more I found some resemblance to X33 (more like a distante relative's this time) on one side, and on the other, intense dry and roasted notes that I would identify more with the style. Somehow, this two very different personalities find a link and become one as we drink. The finish is dry, with wood and prehaps some tobacco. The wood (Tokio is matured with oak chips) gains in strength (both in taste and aroma) as the glass is, very, very slowly, emptied, but it never manages to gain control. Its high ABV is always there, but does not interfere, it's more like an independent observer. What a superb beer! I'm so glad I have another bottle in the cellar.