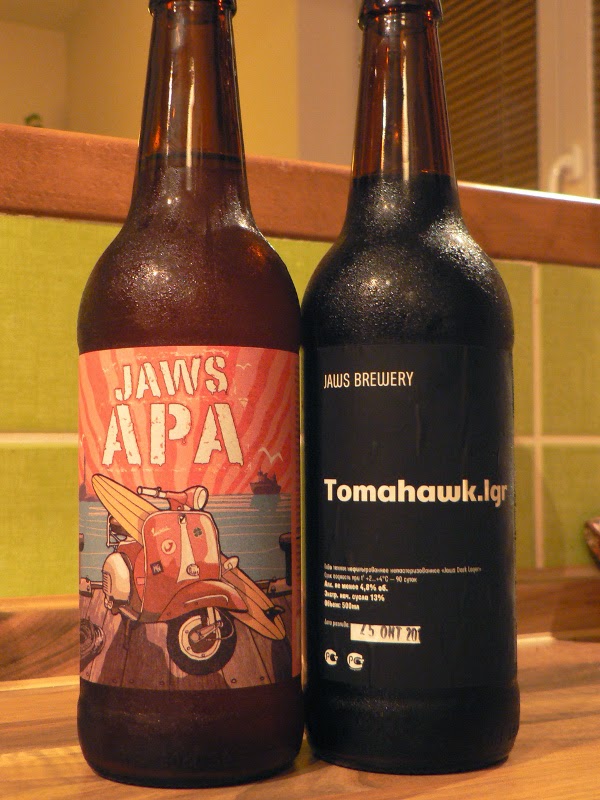 I've got these two beers from my Russian friend Jegor (it's funny how we met, at the Svijany Pivní Slavnosti in 2007, where we exchanged a few words, and now we get together for a couple of pints whenever he comes to Prague). They are from Jaws, a micro-brewery from Ekaterimburg, the best in the area, according to him.

The other day, I opened the one on the right, Tomahawk, mainly because, other than the ABV % and, I assume, the Plato, there was no other information on the label—or rather, nothing I could understand, as it was all written in Russian—and I think drinking a beer you have hardly any information about can be a lot of fun.

Yeah, I know. I could have looked it up on the internet. But really, why bother? I didn't want to generate any unnecessary expectations, I had the beer in my hand already, it had been a present and I was going to drink it one way or another, so I thought it'd be better to do it unburdened by data. 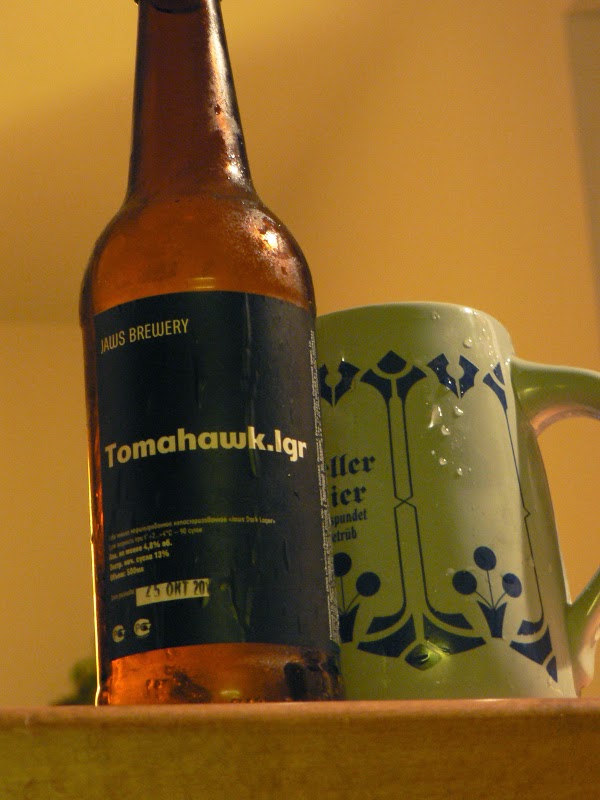 I took a glass out of the cupboard, but then I said “sod it”, and picked my favourite earthenware mug—as far as I'm concerned, the best vessel for pretty much any kind of beer, and don't try to argue, because you're wrong.

I'd expected the beer to be dark—why would they've used a black label otherwise—and it was, and pretty much so, if the latte-coloured head is any indication.

At first, almost mindlessly... No, that's not the word. Instinctively, that's it, I tried to fit a style into the beer, which can also be quite fun—is it...? No, that's not true to the beer. Is it perhaps...? Not quite, but we could give it a silver medal, or whatever. But that lasted, what, two, three sips, max. Once I'd determined it was a very well-made and so far pretty good beer, it was ready to get into the more pleasant business of drinking—raise, tilt, sip, enjoy, repeat—while my mind got busy doing other, more important things. And yet, my attention would be grabbed a couple more times before the mug had emptied, as if the beer wanted to point at how awfully wrong Randy Mosher was the other day.

There's so much more fun, pleasure and joy in being a discerning drinker than a taster.