Yesterday, as I drank the Argentinean beer Grosa (a present from my good friend Guerrillero Culinario), I was reminded of what Boak and Bailey asked the other day about balance.

Unfortunately, this word is often associated with "boring". Though there are indeed many balanced beers that are boring, the truth is that many unbalanced beers can be boring, too. I'm speaking about those that explode at first sip and then run out of script (often they are of the sort that I call "tasting beers").

But a balanced beer can also be very interesting, and even fun to drink, specially when that balance is on the precarious side. This is the example of Grosa, a beer aged in wine casks, brewed by Jerome, in collaboration with Argentine music legend, Oscar, Golden Globe and BAFTA winner, and part-time winemaker Gustavo Santaolalla. 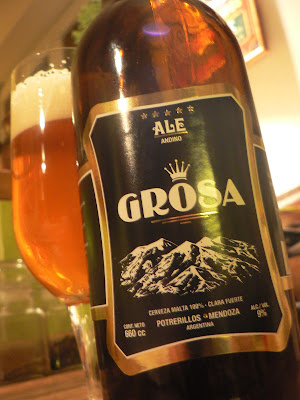 At first, all the bits that make a Grosa's flavour seem to go into the mouth stumbling and pushing each other. It takes them a moment to realise that they should be working together, instead of competing. But still, each sip gives the impression that the beer will fall apart, but it always manages to keep the balance. Almost like an acrobat with a pint too many. The result, besides reminding me of +Malta Cuvée (but with more muscle), is a beer with an incredible drinkability for something so complex and strong (9%ABV).

Precarious balance, but balance nonetheless = interesting and fun beer. There should be more brewers willing to apply this formula.

PD: Grosa could have been a very good example for the other day's post on value. According to Guerrillero, it seems that Santaolalla's fame brings the price higher than the beer is actually worth.