On the piss in Franconia (Day 1)

By Pivní Filosof August 05, 2011
Even though my 40th birthday is still two weeks away, I already got a kickass present (what? You haven't sent yours yet? What are you waiting for?), an invitation to spend a weekend in Franconia, Germany, that had the Annafest as its main program.

The Annafest is a huge beer festival that is held every year at the end of July in what is known as the Kellerwald, a word that can be translated as "cellar forest". It's a forested hill in the outskirts of Forscheim (a very pretty small town) where the local breweries have their "keller", deep cellars dug in the rock, where they traditionally lager their beers. There are five or six that are open year round, but during the festival their number grows to more than 20 and the local breweries are joined by several others from the region. As expected, there is also music, on six stages, amusement park attractions, fast-food stands, etc.

The tour had been organised by Pivo, Bier & Ale and we are 15 people in the group, including Pavel Borowiec, Chief Editor of the magazine. A nice gang with several known faces and others that would become friends during the weekend.

We left Prague at 11, made a stop at a petrol station near the border and drove into Germany. Our destination was Nuremberg, where we would be accommodated. The traffic on the road near the town was awful, no surprise for a Friday afternoon.

We arrived at Hotel Nestor, our home for the next two nights (and much better than I had expected, my room was almost posh), and after leaving our bags and stretching our legs we got on our way to Forchheim, with a stopover in Erlanger to pick up Daša Hrnečková, who would play an important role in this excursion.

It took quite a bit to find this lady (because of the traffic and because the GPS navigation thingy refused to do its job in Erlanger) and when we finally arrived in Forchheim we were all VERY thirsty. We would have to wait a bit longer. We were greeted by a local personality who told us a bit about the town and the festival. By the time he finished I think most of us would have been able to kill an angry boar with our bare hands, if that meant we could get a pint. There was no need for that, only a short walk uphill.

Kellerwald at last! And I swear to you that it's impressive. The atmosphere is unbelievable and the whole settings are almost dreamlike. There were already many people and it all smelled of joy (and grilled sausages). 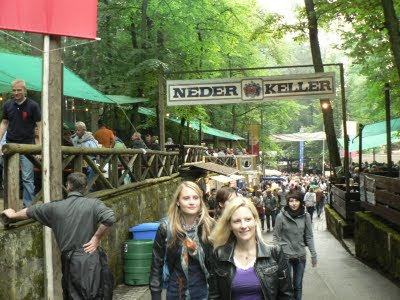 I didn't waste too much time looking around and went straight to the nearest keller to have my first Maß of Festbier. The Festbier are amber beers (lager, of course) with 5.5-5.7% ABV (if I'm not wrong, by their Plato graduation they can be considered bock, or somewhere near there, but I'd like to be corrected) that are lagered in the keller and are dispensed by gravity, not by top pressure. The Maß, from which all these beers are drunk, is a 1l earthenware tankard. I don't like drinking from tupláky (as Czechs call them) because if you don't want your beer to get piss warm, you have to drink it fast. This ceramic tankards are a different thing, the material keeps the temperature for a long time, so you can enjoy your beer without any hurries. 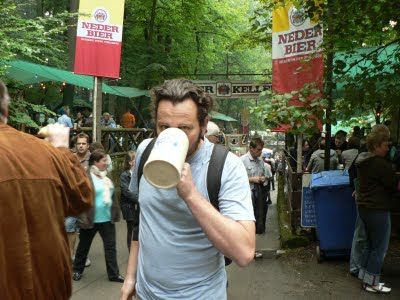 Not that I bothered to see how that work with my first beer of the day. Neder, it was, one of the local breweries. The Maß emptied as if it had been pierced. It didn't take me long to get my second one. All the festbier are very similar, very malty, with notes that reminded me of gingerbread (but don't take that too seriously). Thanks to the way they are dispensed, they have very low carbonation and an amazing drinkability. Neder's turned out to be specially good, a touch hoppier than the rest, which gave it a very nice flowery twist. 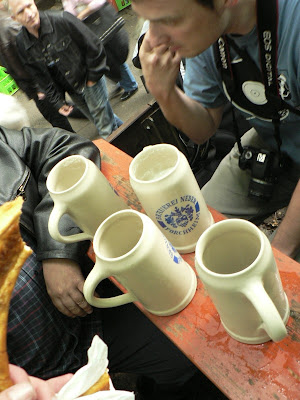 We didn't stay at that Neder's Keller very long. There was a German pop band playing awful German pop music and we went in search of a quieter place, the keller of Eichorn, another local brewer with an also very good festbier. When I was already working on my second Maß of Eichorn I realised I was hungry and ordered some food (besides the fast-food stands, the Keller also serve proper meals). Big mistake. Not because the food was bad, it was great! But because the portion was huge and became an obstacle for my beer drinking. (BTW, at 7EU this Franconian vepřo-knedlo-zelo was great value. At the Czech Beer Festival you'll pay around the same for a smaller portion of something not nearly as good, maybe the organisers should visit Annafest to learn a thing or two). 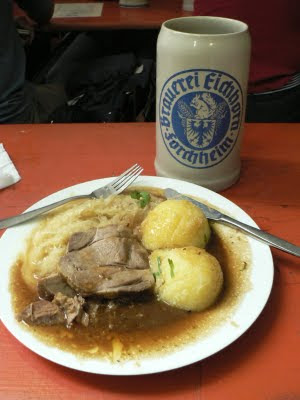 It was hard work to finish the evening's fourth Maß and I had almost decided to go explore a bit when someone had the wisdom of ordering me another beer. Then it was when I finally realised that the Annafest isn't about how many different beers you can drink in a day, but about a celebration of beer drinking with friends. That's the reason you come to Forchheim for.

Curiously, by the time I was finishing my fith litre of Festbier I was feeling much lighter and almost ready for a sixth. Unfortunately, it was time to go back to the bus.

I went to sleep well after midnight, surprisingly undrunk given the amount of strong beer I had consumed, and that was just the beginning...