To PET or not to PET

By Pivní Filosof January 19, 2011
Polyethylene Terephtalate bottles (PET, for friends) seem to have been the only segment that has shown any growth for the multinationals. Some would go as far as to say that if it wasn't for these 1.5 and 2l plastic bottles Prazdroj, Heineken and Staropramen could be in some serious shit.

But beers sold in this kind of bottles are nothing new on the Czech market. The first one I remember seeing in a PET bottle was Sladkův Měšťan (Staropramen's cheapest brand) and that must have been six or seven years ago. I've never bought it, I've always found Měšťan awful and didn't think plastic would improve things. Later there was an attempt by Staropramen to sell their Světlý in a 0.6l plastic bottle. It was very expensive, more than the cans, and didn't enjoy a long life. Also, in some supermarkets you can see to this day PET bottles from a couple of regionals whose products I've never been too keen on, so I've never bought them, either.

When I started visiting microbreweries from out of Prague I saw that most of them sold their products in this kind of containers. I've never had any problems with them, the bottles are filled right from the lagering tanks, and then go straight to fridges. Freshness in guaranteed, something that can be said about supermarkets.

It wasn't until 2009 that PET bottles got into the mainstream. That year Heineken came out with a strong advertising campaign promoting Zlatopramen 11º in a 1.5l container. This time things worked out very well. At first the beer was bottled in Slovakia (if I remember correctly), but thanks to the high demand, the Dutch decided to set up an ad-hoc bottling line at least one of their breweries here in CZ. By that time, they were also selling two more of their brands, Starobrno and Březňák, in PET bottles.

It didn't take long for the other two multinationals to follow Heineken's steps and now they all offer their cheaper brands in PET. Something nobody would have believed a few years ago.

Even though there are quite a few beer enthusiasts who aren't too happy with this, it must be said that plastic bottles do have their advantages. They are lighter, less bulky (in the sense that a 1.5l bottle will be a lot easier to carry than 3 0.5l ones), they aren't fragile and you don't have to return them. On the other hand, the conditions in which they are distributed, stored and sold at supermarkets are not the best.

But all this is theory, spiced perhaps with a bit of prejudice. I wanted to see if the container's material, including the can, had any noticeable effect on the quality of the beer, and the best way to do that was through a blind tasting.

For it I chose Březňák Světlý, which is the only beer available in all three kinds of container that I actually like drinking. I bought all of them at the same supermarket and found another advantage of the PET bottles, the price. The can cost 12.90CZK, the glass bottle, 8.90CZK (+ a 3CZK deposit), both in 0.5l, and the 2l PET bottle cost 36.90CZK; basically the same, but without the need to leave any deposit. 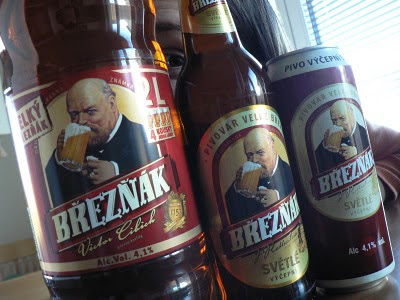 Another detail that surprised me about the big bottle was it turned out to be much easier to handle than I expected. The plastic is pretty hard and I was able to serve a glass using only one hand.

Once the beer were in their glasses, I asked me wife to assign them a letter, make a picture, and bring them to my table. The result was paradoxically unexpected.

The beers were served at room temperature. That wasn't because of any technical reasons, I had forgotten to put the bottles to chill in the morning. With the can or the glass bottle it wouldn't have been a problem, a few minutes in the freezer and that's it, but the 2l monster would have taken much longer and I doubt it would have fit in the freezer to begin with. Point for the can and the glass. 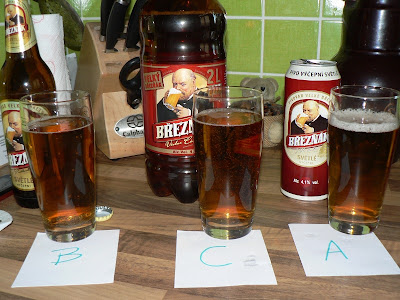 None of the samples looked very pretty. 0 head retention and one of them, B, had furious carbonation, while the other two had large and lazy bubbles going up the glass.

Nothing to remark in the aromas, either, but there were some substantial differences in the flavours. I didn't taste with short, careful sips, I took proper swigs that filled my mouth, that's the way you drink this kind of beer. Once the tasting was over and just for the fun of it, I told my wife where I thought each sample had come from: 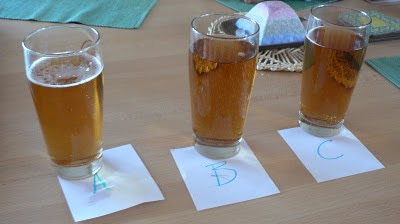 I was right! I had felt a metallic note in the finish of A (I might have to reassess once again my position towards cans); B had been the cleanest of the three (high carbonation aside) and in C I felt an off note, not very intense, but still easy to pick. The best way I can describe it is "cheap, artificial vanilla flavouring", I guess it is a sign of oxidation, but I'm not sure and I'll be happy if anyone out there can confirm or correct this.

To be honest, that off note is something I've felt in other pale lagers that had spent a bit too long in less than ideal conditions. I thought that in this case the plastic was partly to blame. I believe that the material offers less protection than the glass, but, once again, I might be wrong here.

So that's it. The glass offered the best drinking experience of the three. Well, it did in those conditions, but the story doesn't end here.

The can and the glass bottle were polished quite quickly and the PET one went to the fridge, where it would stay until it was time for me to cook dinner. By then, the beer was at a proper temperature and the experience was pretty different. Less carbonation, good head retention (though the carbonation part could also be because the bottle had already been opened and it doesn't matter how tight to screw the cap, the gas will steal leak), but the most remarkable, and nicest, thing was that I couldn't feel that off note. I looked for it, and I knew exactly what I was looking for, but obviously the temperature (which must have been 6º, at most 5ºC) had covered it. What I ended up having in my glass was a very good session beer, tasty, smooth, refreshing, with mild bitterness and a nice malty base. I would have never imagined that it had come from a plastic bottle.

If I was a regular consumer of Březňák Světlý I think I would still buy the 20 bottle case. Returning them wouldn't be a problem, we always do this kind of shopping by car, so price wouldn't be an issue here. Besides, with 0.5l measures, I can dose my intake much better than with a 2l bottle that once opened has to be emptied quite quickly.

On the other hand, if I was organising a garden party or a BBQ I guess I would go for the PET. I would buy enough of them, put them in a tub with iced water and let people serve themselves in plastic cups. Less hassle the day after with picking empty bottles and taking them back to get my refund.