Who let the dog in?

By Pivní Filosof June 10, 2010
Besides the interesting growth and success of some of the regional brewers and the boom of the micro breweries, all while beer consumption in the Czech Republic has declined, another segment that has seen an increase in sales are the imported beers. And I mean quality beers, most of them brewed by micro, regional or independent breweries, and not aberrations like Corona, Desperados and Foster's. Their market share and sales volume might still be rather insignificant, but there are more and more people interested in new and different stuff and they seem to be willing to pay a relatively high price for it.

For already a few years the company ACSAY has been working quite well with a solid portfolio of Belgian brews, that seem to find a new outlet every day. The success of Zlý Časy with their, mostly, American specialties has been remarkable, they pretty much sold out in a couple of months, without prices being much of a factor.

And now, with the addition of Odd Dog things are getting really interesting. This small company was set up by an Englishman and his Czech wife, and have big ambitions. They are already exclusive distributors of none other than Brew Dog and they are also in quite advanced negotiations with other renown and celebrated micros like Nøgne-Ø y Mikkeller.

A few days ago I met Mike, the owner of Odd Dog, for lunch and asked him what made him decide to start this business. He said it was because he wanted to bring in more diversity to the Czech market, that he felt there was a lack of quality imported beers. He also told me that things are going relatively well. At the moment, most of their sales are through their e-shop, but the goal is to start working with pubs, restaurants and specialised shops.

After the talk (during which I lobbied for Haandbryggeriet to be also imported) I was left with a very good impression of Mike. He's a really nice bloke, passionate and open to suggestions and ideas who also happens to now his beer. It was really interesting to be able to exchange opinions with him and know a bit more about his plans. I was also glad to know that he has started working closely with Hanz, the owner of Zlý Časy (another top bloke), who will soon open a beer shop that promises to be the best in Prague, by far.

Mike also was kind to bring me a couple of samples from BrewDog, which he chose carefully after reading this blog and figuring out what I like. 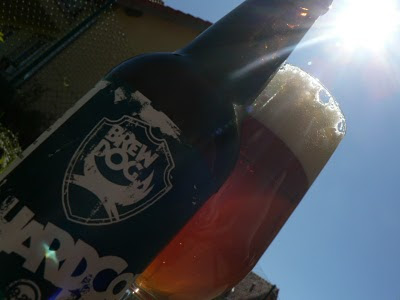 The first one I tasted was HardCore IPA in its new recipe. I had drunk the original version back at that Christmas festival and then at home and I loved it. The new recipe is "-er" for pretty much everything. According to the webpage, its IBU is 150, plus 9.2%ABV. The beer with the highest IBU I remember drinking before was Ruination IPA at a tasting at Evan's place with Velký Al and Rob. Just to prove that the IBU figure all by itself doesn't mean much, I found HardCore less bitter than Ruination, partly thanks to its more beefed up malts and its surprisingly short finish. I loved it! It was strong, balanced, intense, complex enough and at the same time very easy to drink. Fantastic to sip together with a cheese platter in a warm evening while the sun goes down. Perhaps my favourite beer from this Scottish brewer. 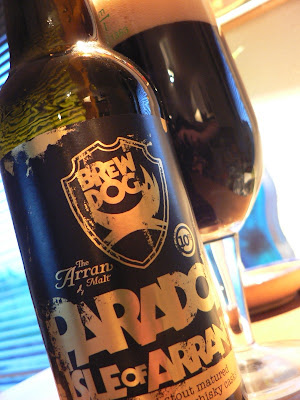 The other sample was Paradox Isle of Arran. Mike brought it with the promise that I would like it better than Paradox Smokehead, a grand beer that I wish I could drink again some day. This version of Paradox is very different to Smokehead. The whisky has a stronger grip on the whole thing, balanced by chocolate and wood in the taste, and chocolate, soy sauce, vanilla and fruit in the bouquet. I liked it, I liked it plenty. Very nice as a night cap. But, if I had to choose I would stay with Smokehead. Now, if Mike feels like putting both beers side by side, perhaps in a blind tasting I would not mind comparing them again.

Mike also reminded me that James Watts, the Canine in Chief, is coming down to Prague to sniff some butts and mark territory (and I hope this will stay as a silly pun and not become inspiration for anyone). He'll be giving a presentation next Thursday, 24 June, from 6PM at Pivovarský Klub. If there are any tickets still available, reserve them now. Otherwise, you might still come across the dogs at one of the several hospody they'll be visiting.

Anyway, I just want to wish Odd Dog nothing but success. I really hope their plans and ambitions come to fruition. We can never have enough variety.