By Pivní Filosof November 27, 2009
If my chances of visiting my native country and enjoy the local micro brewing boom are at the moment non existent, I would then need some quantum theorist to estimate those of visiting neighbouring Chile, where there also seems to be a micro brewing boom, or at least that is the impression I get from reading Catador's blog.

The magic of the Internet has practically vanished borders and that is how Leonardo, one of my Chilean readers, made it possible for me to get a small taste of what is happening in his country's beer scene. While we were having a very good time, with very good beers at Pivovarský Dům, he gave me the five samples he'd lugged all the way from the Southern Hemisphere, four from Szot and one from Volcanes del Sur.

I decided to start with the bunch from Szot. Seen from here, Szot (which I like to pronounce the Polish way, "Shot") is a pretty successful microbrewery with a rather good reputation among local beer fans. The four samples I got were Pale Ale, Amber Ale, Stout and Vapor, all with 5%ABV (though the web page says they have 6%). 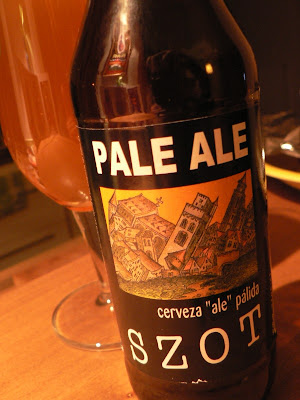 I opened Pale Ale first. I thought, accurately, that it would be the paler of the lot. It pours gold-orange and, at least this bottle, is very cloudy. More than a pale ale it looks like a Blegian Blonde or a Weizen without much head. The bouquet has a lot, way too much, yeast that blankets all the rest. The same notes can be found in the taste, there's a bit of fruit when the sip goes it, but soon its eliminated by the sourness of the yeast. I don't like saying that a beer "isn't true to style", but this one felt like drinking a not very well made Belgian ale. 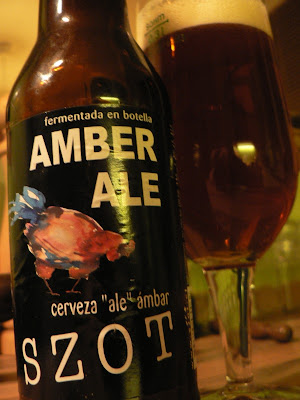 A couple of hours later I opened Ámbar, which does pour amber, as the Spanish name promises. It's clearer than the previous and also has a nicer head. The nose is mild, mostly caramel, the same yeasts as in the Pale Ale can also be felt, better integrated this time, though. The taste is weak, boring, flat, forgettable, tired. There's some fruit, toffee and spice but they never manage to express themselves as they should. At best, Szot Pale Ale could be an adequate "entry beer". It would never scare a novice away, but a more experienced or demanding palate will be left wanting for more, and not of the same. 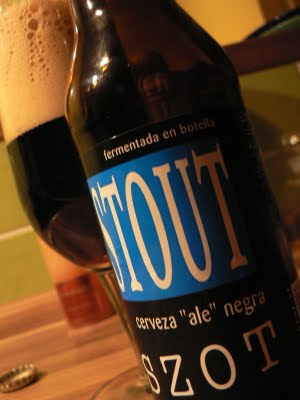 It was the turn of Stout. Very dark amber it pours, not getting to black, with too much head. There are some green apples with a background of coffee in the nose, and also the same yeasts as before. The taste surprises with roasted, coffee and cocoa notes, with a mild sourness at the finish. Unfortunately, and partly due to the thin body, once the initial surprise wears out we are left with a beer that doesn't have much to say and ends up being a bore.

I had already lost my faith on this Chilean micro, but I had left Vapor (Steam) for last because it was the one I was most curious about. I had already tasted a couple of German Dampfbiere, which I had liked a lot. Taking a look at the web page I find that this is an hybrid lager, which points more to an American influenced thing. Does this all matter? No. Let's drink and shut up! 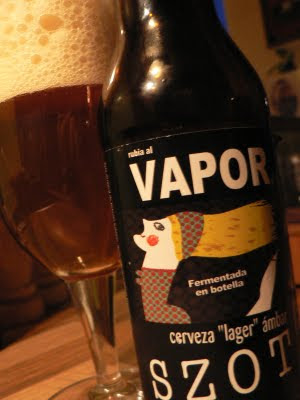 Szot Vapor pours orange, topped by a nice, spongy head. A handsome beer. In the bouquet there's a lot of tropical fruit and flowers, which reminded me to some pale ales I've had. To the eyes and the nose, this beer is already a few steps above the others, to the palate, it's like 10 floors above. Silky body that softly coats the palate, there's a lot of fruit with a delicate touch of caramel that brings it up, everything well balanced by flowers and spice. Very, very tasty. This is what an "entry beer" should be like! It's different enough to everything a novice has drunk before, without anything too exotic or aggressive to scare them away, and at the same time, it's interesting enough to keep the more experienced drinkers entertained. 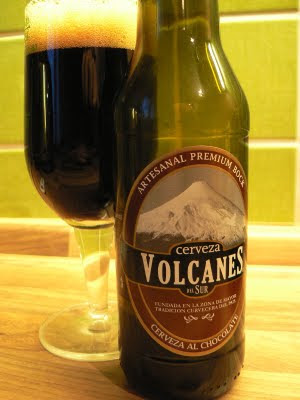 I left for "dessert" Volcanes del Sur al Chocolate, according to them a "Artisan Premium Bock" (or something like that). I'm going to be brief. It's awful! It tastes like a mass produced dark lager with some cheap cocoa powder in it. Ended up in the drain. I sometimes wonder why there are so many micros that make this rubbish (they sell well, you moron! Good reason).

Anyway, the balance. Forgetting for a moment the taste-bud rape that was Volcanes del Sur and focusing only on Szot, it's not good. I don't care what sort of market they are in, a brewery with the experience and reputation of Szot shouldn't be selling such uninspired beers like Pale Ale, Amber Ale and Stout, specially when they show their talent and skill with such a good product like Vapor.