By Pivní Filosof November 17, 2009
20 years ago today I was a couple of weeks from finishing High School. Many things were going around in my mind. A big sense of accomplishment from having successfully finished such an important stage in my life; some nervousness from what the future had in stock for me and from knowing that things would never be so easy again and also a bit of sadness from knowing deep down that the twists and turns of life would make me loose touch with many of the people I had shared so many years of my life with.

1989 was also a very hectic year from Argentina. Presidential elections, economic meltdown and violent social unrest. Despite all this, we got and followed the news of the events unfolding in Eastern Europe: Hungary opening its border with Austria, the fall of the Berlin Wall and the Velvet Revolution in Czechoslovakia.

20 years ago today the Velvet Revolution started. It was a series of peaceful protests that, though not the first of their kind, in a few days managed to bring down the Communist Regime. Back then I didn't pay too much attention to the details, and so it wasn't until I moved here that I knew that the leader of that movement was a playwright, essayist and political dissident called Václav Havel. By the end of that year Mr Havel would be elected President of Czechoslovakia and in 2002 he was in the last months of his second, and last, term as President of the Czech Rep.

With time I would learn more things about this man and today, even though I don't share many of his political views, I have great respect and some admiration for him. That's because he has something that few politicians nowadays have, Integrity. That and massive cojones. Once I read that, when things were getting pretty rough for people like him, he was offered help to emigrate. He chose to stay and fight from the inside, risking, if not his life, for sure his health. 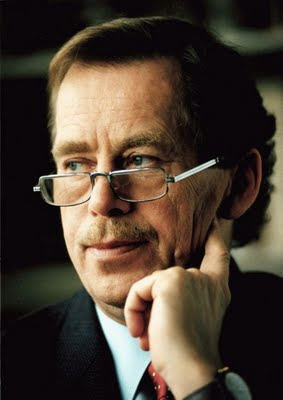 I've seen Václav Havel in person twice, and both times I was very impressed. Neither was at an official event or anything similar, I didn't even hear him speak. I saw him at the supermarket, alone. No bodyguards, no PA's, no extraordinary security measures, just a pensioner doing his shopping like everyone else. Some people approached him to greet him or shake his hand, most went about their business as if nothing was happening (something that impressed me about the Czechs as well). Where I come from, you would never see an ex-president or high profile politician doing something so pedestrian, they have a detachment of minions to take care of that (besides, if they did bother, people wouldn't approach them to shake their hands, but to lynch them, but that's something else).

And what does it all have to do with the topic of this blog? Well, it's well known that Mr. Havel likes his pivo, and he likes it good. I would love to share a few pints with him at a pub. I'm sure conversation would be great and the man must have some really juicy stories to tell.

So today I raise my "půl litr" in honour of Václav Havel and all those brave men and women who withouth shedding any blood were able to end four decades of oppression and lies.