By Pivní Filosof September 14, 2009
Regardless of what some people would like us to believe, it is clear now that there are some beers that are meant to be drunk only after months, if not years, of maturing in a bottle. It's not that you can't drink them "fresh and young", but that's not what their brewers had in mind and likely is they won't be enjoyed to their fullest.

There are also many beers that you can perfectly enjoy "fresh and young", but that at the same time, can be aged, after which they will have evolved and in some cases even improved. Many ales that fit this description could be mentioned, but how many lagers? Well, the other day I came across one, and the best of all was that it was a beer that I know very well, X33.

In one of my visits to U Medvídku I had a chat with Laďa, the brew master, about vintage beers and he, just like that, said that he had some samples of X33 that were a couple of years old aging in a fridge. Then he asked me if I didn't want to come back some day to taste it together.

I don't think I need to tell you what my answer was.

When I arrived there the other day Laďa was very busy and not in his best mood, there were some technical problems with the kettles and the batch he was cooking was likely ruined. Still he offered me a pint of 1466 (the house's new pale lager) to warm up.

That half litre of this 14.66° Balling beer, tapped straight from one of the lagering barrels, went down quite fast. It was so tasty and full of life. A delight. When I was done with the pint Laďa went to get a bottle of X33 Vintage 2007. 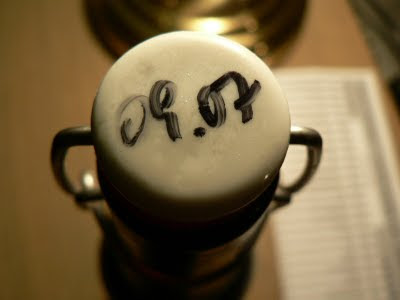 Curiously, he had never tasted the aged version of his beer and he was as surprised by the changes as me. It looked clearer and had a thinner body, but that was nothing compared with the way the flavours and aromas had evolved during those two years. Most of that jammy fruitiness had vanished, leaving behind nuts, tobacco, wood and licorice. Halfway down the sip a nice dose of caramel shows up to balance the ensemble before a finish with yet more dry notes. In the background there is a hint of sourness to wrap everything in a very pleasant package.

I can't say that X33 is better or worse than fresh after aging for two years. It's just too different to make this sort of comparison. It drinks slower than the fresh one and it reminded me a bit to a semi-sweet Sherry or Malaga wine. I really liked it a lot.

Actually, if it was up to me I would save at least half a barrel of X33, bottle it with some proper conditioning (if that was at all necessary) in 750ml bottles and would let it age for two years. Then I would sell it for a nice price. I'm sure it would be a hit. In the meantime, though, I can only make do with having friends at the right places, which is no small thing.

PS: One thing I didn't realise until I finished my glass, that bottle was from the same batch as that first X33 I ever drunk.