By Pivní Filosof January 25, 2009
Many are those who still think that beer isn't good to accompany food, at least not soemthing that isnt' casual or quick, not to mention beer as ingredient. However, and I believe I won't be saying anything new to many of the readers of this blog, reality shows otherwise. Beer can pair with foods just as well, if not better, than the best wines, and can also be, if chosen correctly, an excellent ingredient for the most delicate recipes.

That is what "Pivo v poháru i na talíři" (beer in the glass and the plate) wanted to show last Thursday. The event was organised together by Pivovarský Klub and the local chapter of Slow Food. Each of the six courses (soup, warm appetizer, two main courses and two deserts) were made with beer as an ingredient and accopanied by carefully selected beers. The pairings weren't put together by any professional sommelier, but by Aleš Dočkal (one of the partners of PK) using common sense and the advice of friends.

The cellar of the Klub was packed when the event started. While we sipped a glass of Černá Hora Black Hill, a beer aperitif with honey and herbs, we were told a brief history of the Slow Food movement, which isn't just a superficial antinomy to Fast Food, but that also has as philosphy to promote more careful cooking using locally sourced ingredients. 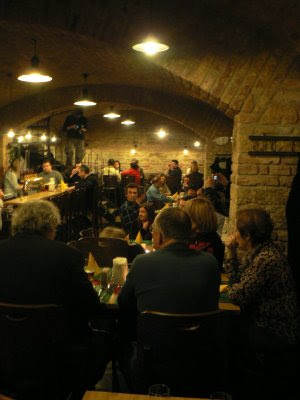 After the aperitif, pivní polevka (beer soup) was served. I'd heard about it before, but had never eaten it. It's made with stock, wheat beer, cinammon and sugar, among other things, and I found it quite interesting and tasty, though I must say that it isn't something that everyone will like. The chosen beer was Erdinger Weissbier. Choosing a wheat beer was sensible, though it could have been something better than Erdinger. It is to wheat beers what Gambrinus is to pivo. I would have liked something with more taste and colour, I think Primátor Weizen would have done a much better job. 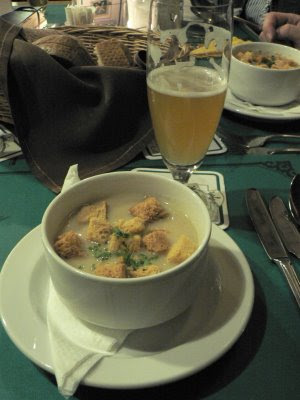 The warm appetizer was a classic of Pivovarský Klub, klobásy v černem pivě (sausages in black beer), as always, they were very tasty. The chosen beer was Dačický Světlý Ležák, Pivovar Kutná Hora, a brewery with an uncertain future now operated by Heineken CZ. I was wary of it at first. Dačický isn't a bad beer, but it's not among my favourites either, I've always found it slightly out of balance. With the sausages, however, it was something else. This pairing showed very well how the relationship between food and beer can improve both. The bittersweet/slight spiciness of the dish managed to cover those notes that I don't like from the beer, leaving a pleasant bitterness that balanced it. 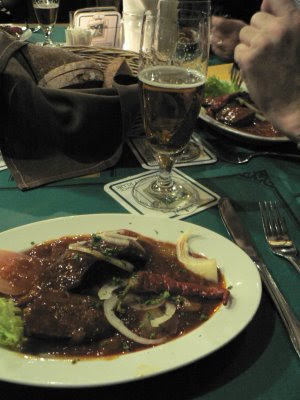 The first main course was a rabbit roll filled with bacon and smoked ham in a beer sauce with bread and carrot knedlíky. I love rabbit and this one was pretty good, tender and a little juicy. The sauce, despite having been cooked with Pardubický Porter was rather mild, maybe lacking a bit of flavour, to my taste. A bit more of it wouldn't have hurt either, I didn't have any left for the knedlíky (that weren't at all bad). The pairing, in this case, was my idea. Aleš had told me a couple of days before that he wanted to serve a polotmavé and I suggested Ferdinand Sedm Kuli, a 13% amber with a bit of herbs that give it a nice twist. I liked the result, and one of my table companions congratulated me on the choice. 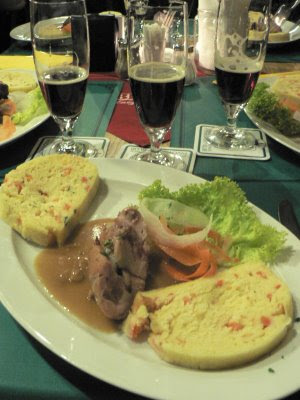 The second main was venison stew with croquettes, another Klub's classic that I also like a lot. It was very, very nice, the meat was deliciously tender and the sauce very tasty, more when the cranberries start melting in it. The pairing wasnt bad, but could have been better. Jihlavksý Grand, one of the finest Czech strong lagers. It wasn't that beer and food didn't match, but that, as Evan Rail pointed to me, nor the beer added anything to the food, neither the food to the beer. Perhaps a stout or, why not, the very same Pardubický Porter that was used for the sauce would have done something more interesting. 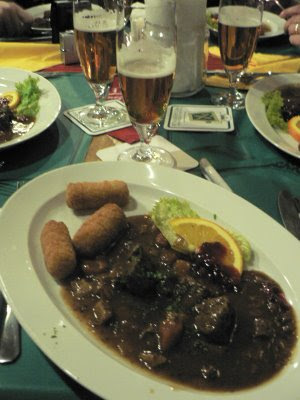 And it was time for the desserts. The first, pancakes with beer marmelade. The pairing was the least happy of the evening. Šamp is a beer from Pivovarský Dům that uses champagne yeasts and it's brewed in Strakonice. I've never liked it very much, and to make it worse, the pancakes covered the most interesting bits of the beer leaving it only like just another lager to the palate. 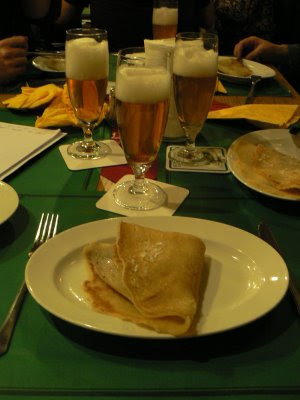 The grand finale was reserved for Pivní řez (beer cake), basically, a medovník with a beer marmelade filling. Very nice, very sweet and tough to pair, some would say. Not so much. The chosen beer was an American IPA brewed by Pivovarský Dům, with a lot of C hops and some Saaz. Fantastically citrusy, with enough fruit to balance it. Wonderful pairing. 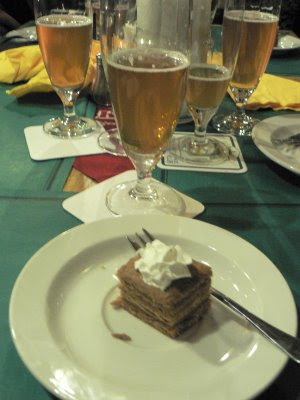 The event had one serious problem: between courses Aleš Dočkal would explain the recipes and the pairings. While he spoke the service grinded to a halt, and it wasn't until he was finished that the beers and food would start arriving to the tables (very slowly, there were only two waitresses for more than 70 people). That made the interval between course and course, and worse, between beer and beer, very long and dry. But I don't think that is something that would be hard to correct if there is another session.

The balance is very positive. This never wanted to be something for highly sophisticated foodies, it's aim was to open the eyes of the average consumer. I would be interesting if both Slow Food and Pivovarský Klub could organise something similar but aimed at more beer laypeople. In the meantime, I am already looking forward to the next event of this kind that will deal with cheese and beer pairings.

PS: I have the recipes of each of the courses (minus sweets), if anyone is interested, contact me and I will send them.