By Pivní Filosof May 30, 2008
I'm glad that the Czech market seems to be slowly opening to imported beers. Yes, most of them come by the hand of multinationals and, but for a few exceptions, they are as mediocre as your average Eurolager. But still you can find a gem or two if you look for them. Unfortunately, Erdinger beers are not among them.

This month's event at Pivovarský Klub was the presentation of the Bavarian Brewery Erdinger. The brand is among the top best selling in Germany, which is somewhat remarkable given that the 1.5 million hl they pop out annually are all wheat beers. They are also sponsors of Bayern Munich, the most popular and successful German football team.

My only experience with this brauhaus was their Dunkles Weizen, which I'd drank a few years ago and, as far as I remember, I had liked a lot.

The presentation, hosted by the brewery's local distributor, was very professional and as interestinga it could be. They presented six beers from the product line: Alkoholfrei, Weissbier, Champ, Schneeweisse (winter beer), Dunkles and Pikantus (Weizenbok). 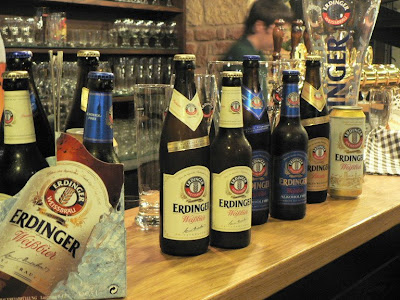 I haven't got much good to say about the beers. The only beer that I found to be in someway interesting and with some character was Pikantus (17°balling, 7,3%ABV). This dark amber had a very fruity nose and its flavour in a way reminded me of Primátor Polomavé 13°, only sweeter.

What the brewery surely wants to do with Schneeweisse is to increase their sales during the winter months, since wheat beers are mostly drunk in summer. The result is the expected for a beer that must have been designed mostly by the marketing department of the comapy.

And if it's marketing what we are talking about, what a better example of a trick from the discipline's bottomless hat than Champ. According to the web page, Erdinger Champ is the ideal lifestyle wheat beer, what they mean by that, is any body's guess. The fact is that it comes in a long neck bottle with a twist cap, and it's meant to be drunk directly from the bottle, I don't think much more can be added after that. I liked it as much as Heineken.

I didn't like Dunkles as much as that first time (maybe my palate has evolved?) and I found no personality whatsoever in Weissbier, in fact, I think that Primátor Weizen is a much better beer.

In a nutshell, all that could be expected from a brewery of this kind. The kind that puts more emphasis on the brand than on the product. But it brought up a question, with pretty evident answer: Why is it that all the best selling beers in every country are so mediocre, if not downright awful?