By Pivní Filosof May 16, 2008
The first time I drank a beer from Platan, I don't remember which, I didn't like it, and the same happened the second and third times. Each at a different place, which I no longer remember.

Not long ago, and I also can't remember when or where, I noticed something had changed. It wasn't the same beer, it had improved considerable. What before seemed something made without much care, now had become a well brewed beer.

One day, at the place where I buy my case of Svijany, I realised that they also carry Platan 11%, so I decided to buy a couple of bottles to drink at home. The following day, while I was making dinner, I opened the bottle I had left in the fridge to share it with my wife and take my notes.

When pouring we have a light golden color beer that topped with a generous head and with low carbonation. It doesn't tell much to the eyes, really. The beer actually starts talking the nose. What it says is intense and rather interesting for a beer of its kind, I felt honey and something like cooked cream and cereals, all with a mild citrus and mint background. It goes in with the same honey notes, that actually never get to be too sweet, they have more like a cereal-like texture. I felt hardly any bitterness at the beginning, but little by little and with a lot of work the bitterness gains in intensity and dominate the finish with not very strong citrus notes. It's not a beer that blew my mind, I don't see it as ever becoming a favourite, but it is a good alternative to the hoppier Svijanský Ritýř that I usually drink. 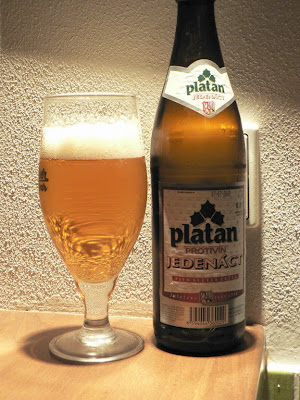 Who was actually fascinated by Platan 11% was my wife. She isn't a big fan of very hoppy beers, and she liked this one a lot. So, it has become part of the usual rotation at home.

Personally, what I liked the most about this unpretentious beer is that it represents that overall improvement of Pivovar Protivín's game.