Not so high expectations anymore

By Pivní Filosof March 28, 2008
When I posted my tasting notes from three of the beers from Pivovar Pivovar Žatec I made clear that I was not too crazy about them, in fact, that they had disappointed me. I still had two left to taste and I wanted to give them a chance.

They turned out to be three, Export and Lučan were joined by Velikonoční 15°, an Easter beer.

It was this seasonal brew the first one I tasted, not bottled, but on tap. They had it at Pivní Galerie when I went to buy the bottles. It's kvasnicové of deep golden colour and a nice spongy head. The nose is dominated by ripe fruit, supported by honey and mild citrus notes, quite pleasant. It was the honey what I first felt when drinking it, followed by sugary fruit and a short pleasant citrus finish. So far, so good. I made a little mistake by ordering a pul litr, instead of a smaller dose (0.3l). However, contrary to what is common when drinking bigger doses of strong beers, this one didn't saturate my sense. Halfway down the glass it seemed as if the beer had ran out of batteries. The flavours dwindled to the point of making this beer boring as a bad comedy. 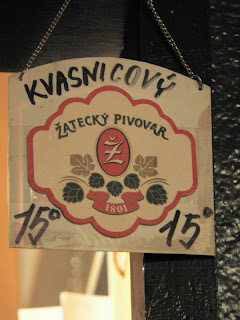 The Export follows the line of its sisters. They are all from the same stock. It is a lager of pale golden, with little carbonation (as good lagers should be). Apples predominate on the nose, supported by cereal and some all too mild herbal notes. To give it credit, the mouthfeel is very nice, silky and almost sensual. The taste, however, tries to be interesting. It feels like a baby learning how to walk, making its first steps and when it seems it has managed it, falls and gives up, preferring to crawl instead. Better than the Premium, no doubt, but just that. 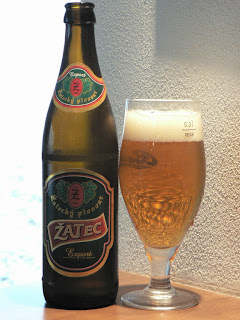 When everything seemed lost and the Žatec family would become like a boring neighbour or colleague, those that always tell the same boring anecdote, came Lučan.

This beer's name refers to a mythical character in early Czech history. He was the leader of a tribe enemy to the ancient Czechs that came from the Žatec area to battle the Přemislid forces. According to the legend, 20.000 soldiers took part in the bloody battle that was fought on the fields right behind my house. The Czechs were victorious, but at a big cost, since their hero Čestmír fell in the struggle.

Legends aside, I'm glad I left Lučan for last. This deep amber beer, not too different in looks to Xantho (nice head included), has and intense cocoa nose that almost becomes chocolate with very interesting citrusy notes making contrast. Evan Rail says in his book that drinking it is almost like biting on a piece of Sacher cake. I wouldn't go that far, but I do agree that it is intense and interesting. Caramel followed by strong roasted notes that, again, threaten to evolve into chocolate. The finish is short, tasting almost like cola, and leaves a mild citrus aftertaste that goes away slowly. It is a very well accomplished beer, almost everything that can be expected from a brewery located in Saaz, the heart of Czech brewing art. Unfortunately, it is only the exception in a line that doesn't say much. It's worth seeking it, ignoring the rest. 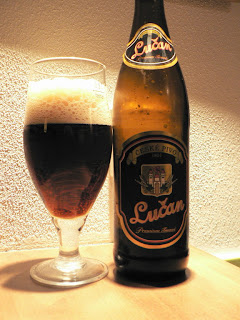