By Pivní Filosof April 29, 2010
After more than half a year of going around, the other day was the official presentation of Aliance P.I.V. with a press conference that took place at the iconic První Pivní Tramwaj.

As I already told you back then, this project has brought together, for the moment, five Prague pubs with rotating beers. Nothing has changed in their philosophy, the association is open to any hospoda with at least one rotating tap as long as they agree with a couple more conditions, to offer the brochures of the Alliance and to display the beer cards. 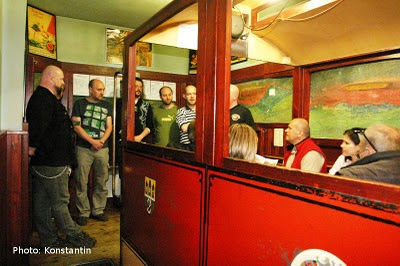 Those two things were also explained and presented at the conference. The brochures are a sort of catalog or guide with the addresses, pictures, etc. of all the members, and they will get bigger as more pubs join. The cards aim to show all available technical data of the beers on tap, detailed list of ingredients, plato, EBU, etc. The idea is not only to inform the public, but also to encourage brewers to give as much information as possible about their beers. These cards are compiled in .pdf format in the Alliance's website so they can be easily downloaded and printed pub owners (and clients). 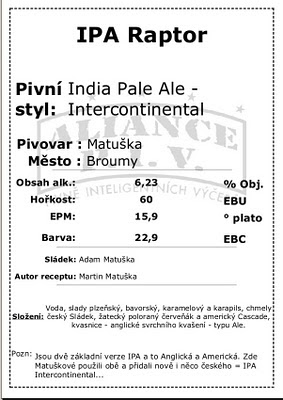 Tomáš Erlich, chairman of Sdružení Přátel Piva, spoke about the importance of the cards in enriching our beer culture, specially now when more and more people are beginning to pay attention to what they have in their glasses.

Among the attendants to the conference was one of the managers of Pivovar Herold. He said he was very happy with this project and the rotating beers trend in general because they are giving a lot of exposure to many beers that otherwise would have hardly reached so many consumers.

During the conference there wasn't a single moment with empty glasses. While I took notes and listened (more or less) attentively I was also able to enjoy Chotěboř Ležák, Primátor Weizen y Kocour Samurai IPA, not bad, not bad at all. Then we were treated with some really kick ass guláš. I must say that I enjoyed this press conference a bit more than the one the week before (the pretty girls were missing, but since I can only taste beer and food, I didn't really mind.

After the event had finished some of us hanged around a bit longer. We talked about some rumors from Heineken and the hottest beer topic at the moment, tetrahops (I have a very belated piece on that, you'll have to be patient), among other things.

What a great project Aliance P.I.V. is. From here I give it all my support and, I'm, so do you.