From the Motherland (II)

By Pivní Filosof April 07, 2010
Although my first experience with craft beers from Argentina was not very satisfying, I was left wanting for more. So when Lionel, one of my readers down there, wrote saying he was going to come to this neck of the woods and fancied bringing me some sample, I was really glad.

I could have gone for some of the craft brews that have been recently getting good reviews from the Argentine beer blogs, but I wanted to drink something easier to get there and that could also work as some sort of benchmark for the new beers in Argentina. That's why I asked my friend to bring me something from Antares (which unfortunately, he couldn't get) and Otro Mundo (which was able to get).

I had heard and read quite a lot about Otro Mundo, usually followed by good comments. This brewery didn't follow the usual model in Argentina (and other countries), it wasn't an evolution of homebrewing. The owners are far more ambitious and since its conception, it was planned as a serious business and from its very first commercial batch the beers, all pateurised and filtered, are brewed at the facilities formerly used by a now defunct brewery. 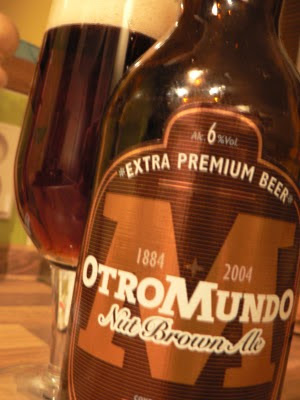 I started with Nut Brown Ale, with 6%ABV. It pours, well, brown, very clean and clear, topped by a pretty good looking white head. The nose has a lot caramel, almost crossing the border with toffee, and there in the background some herbal, mint mostly, notes can be picked, which add some balance. The taste is caramel and more caramel, and then some more. There's a moment when those mint notes seem to appear, but it's only a fleeting glimpse caught on the corner of my eye, I turned to look, but it was gone, and all I'm left with is a finish the reminds of refined sugar diluted in water. Not very pleasant. A pity, it had quite some potential. 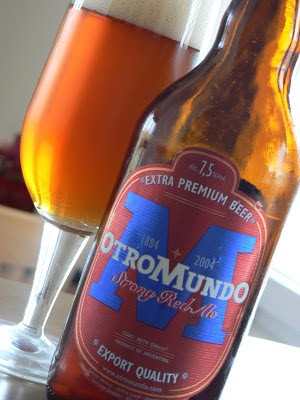 The other sample that Lionel and his lovely wife gave to me during the great lunch we had was Strong Red Ale, with 7.5%ABV. Rather than red, it pours an orange shade of amber, crystal clear, topped with an even more compact and lasting head than Nut Brown's. A very handsome beer, indeed. The nose is mostly ripe tropical fruit with strong syrup. The palate is greeted by a nice, almost velvety mouthfeel that packs mild caramel notes dosing tropical fruit in a nice balance, all with a wonderfully integrated alcohol. Some flowers show up in the finish that fortunately, manage to almost cover those unpleasant sugary notes.

Quite a positive balance, I must say. I didn't like Nut Brown, yeah, but that's only a personal thing, I didn't feel anything wrong with it (though those glucose notes were quite suspicious). On the other hand, I found Strong Red to be a very good beer. It's not something that blew my mind or made me tremble in delight, and in fact, if I compared it with similar beers from Europe I have tasted, it would be quite far behind; but that wouldn't be too fair, perhaps. Either way, it gave me the impression of being a product of consistent quality (don't ask me how I came to such conclusion after having drunk only one bottle, take it as a hunch) and I would sure gladly drink it if I were in Argentina.

Once again, thanks a bunch to Lionel for these beers.